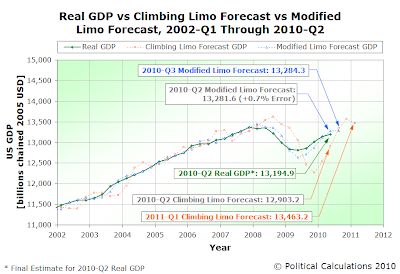 Our target value of $13,284.3 billion is lower than the $13,317.7 figure we forecast using the advance GDP estimate released in July 2010. We're test driving using the advance release GDP data for use in our Modified Limo forecasting method to see how well that data might work in anticipating where GDP will actually be for the forecast quarter some 5 months before the data is finalized.

Looking at the growth rate of GDP, we would expect that the real GDP growth rate in 2010-Q3 will be greater than the 1.7% figure finalized for 2010-Q2. The reason why has to do with the sensitivity of the GDP growth rate, which can see some pretty large changes with only a small change in the recorded level of GDP. Our thinking is that GDP in 2010-Q2 skewed to the low side of where the real trend in economic growth is going, which will be followed by something like a reversion to the mean in 2010-Q3.

And we'll have our first indication of whether we're right or not before the end of October!