Now that we've entered a new business quarter, it's time to look ahead at what investors currently expect for the economic situation in the United States through the end of 2011. 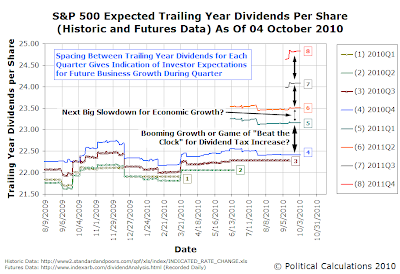 We'll do that using dividend futures data for the S&P 500, where we can get a good sense of how good investors expect each quarter between now and the fourth quarter of 2011 will play out by size of the gaps between each quarter's projected trailing year dividend data.

The problem we see in looking at what investors expect for the future is the major economic boom that would appear to be in store for 2011-Q1.

That's a significant factor for when we look forward to the first quarter of 2011, where we see that the U.S. economy would appear to be in for a booming quarter. Unfortunately, there are other factors at play that would make that outcome very unlikely.

What we suspect is that businesses will be paying out much larger cash dividends to their shareholders during the final 15 calendar days of 2010 than they would have done otherwise, thanks to the continuing uncertainty related to how much dividends will be taxed in 2011.

With the U.S. Congress having adjourned until November 2010 without having taken any action to deal with tax rates in 2011, investors face three possible scenario where dividends are concerned: Consequently, we find that rather than enjoying a booming economy in the first quarter of 2011, the U.S. economy will continue its recent history of anemic growth during that quarter.

Speaking of which, we'll be officially projecting where GDP will be recorded for the third quarter of 2010 later this week.

Update 10:27 AM PDT: It suddenly occurred to us that if the trailing year dividend futures data we use to project where stock prices are going next are indeed being inflated by an investor game of "beat the clock" being played in the first quarter of 2011 (or rather, during the last two weeks of 2010), it may well be that the noise we've been seeing in the stock market since April 2010 may in fact be in the dividend data rather than in the price data!

If that's the case, stock prices will likely underperform our last forecast by a significant margin, since we assumed that the dividend data we used to make our projection was real and not being inflated above where expected future business conditions would otherwise put them!

It all just got a lot more interesting!