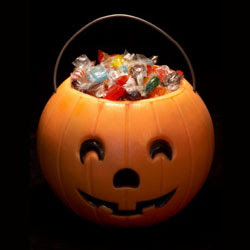 With Halloween nearly upon us, where millions of children in the U.S. are about to participate in the annual candy collection and consumption exercise known as trick-or-treating, we wondered how an increasingly intrusive government might interject itself into the event for the sake of keeping too many kids from having too much fun.

Because that would be wrong, you see, on so many different levels. Children might, if not prevented by government action, consume too much candy. If they were, why, it would excessively burden the health care system because they would get too fat during their school years. They wouldn't be able to learn at school because they couldn't focus because of all that sugar in their system. Why, they might even become criminals or make YouTube videos like this documenting the effects of excessive candy consumption!

Clearly, the government must act to protect the children! And in Washington state, they've acted by imposing taxes on candy! Thank goodness for the collective wisdom of Washington state's elected officials, who went to the trouble to legally define the kinds of candies most likely to place the state's children at risk of being at risk!

But to show that we care about children at least as much as the government does, we're happy to present a simple guide to what you need to know about promoting the well being of children who might arrive at your door while trick-or-treating this year while also avoiding having to pay taxes on all the candy the government has determined to be bad for children. In the guide below, which we're providing to you at no cost as a public service, the item on the left should be considered to be unhealthy since it's subject to Washington's tax on candy, while the item on the right should be considered to be a healthy alternative, because it isn't subject to Washington's tax on candy.

Because if you can't trust the government's legislators and regulators to get this kind of thing right, who can you trust?...

And finally, remember that these kinds of well-thought out taxes are just one step away from more drastic steps that would progressively seek to outlaw trick or treating altogether. Because if people's activities and choices aren't sufficiently controlled and regulated by the government, they might find themselves at risk of being at risk!

HT: Sound Politics and Yes on 1107, which provided the guide we presented above!