When we last looked at the trend in new unemployment claims, it was Election Day in the United States. At that time, we made the following forecast:

For the week of 30 October 2010, we would anticipate that these claims will fall in a range between 411,000 and 508,000. Assuming the current trend remains in effect, we should see the overall level of jobless claims fall at a very sluggish rate of 220 per week.

That forecast was almost perfectly on target. Through the week of 30 October 2010, the rate at which initial unemployment insurance claims have been filed since the current trend began on 21 November 2009 was declining by 215 per week, with the actual new claims number coming in just above the middle of our statistically forecast range at 459,000 (initially reported as 457,000).

We had also speculated, via the graph included with our last review, that the large number of waivers the Obama administration was granting to the big corporations and unions it favors above all other U.S. business entities from having to comply with the new health care reform law might be a significant factor that could affect the U.S. layoff trend.

As it happened, the data for 30 October 2010 allows us to rule that potential factor out. With the number of layoffs that week exceeding the mean value we had forecast, we find that no clear break in the overall trend for U.S. layoffs may be attributed to the Obamacare waivers granted to big businesses and unions. 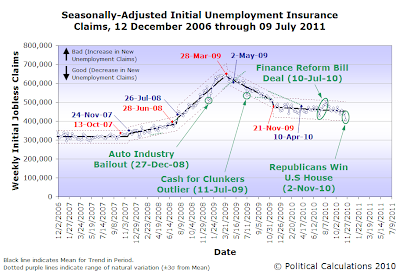 But something bigger may be taking place today!

Updating our chart showing the major trends and break-points since 2006, we find that the U.S. may indeed now be on the verge of breaking out of the overall trend for new unemployment claim filings established when HR 3962, the first credible legislative forerunner to what ultimately became the Obamacare health reform law, squelched the improving situation for layoffs in the U.S. when it was introduced.

Unfortunately for the Obama administration, the something bigger that might finally be positively affecting the outlook for the bulk of U.S. businesses would appear to be the results of Election Day 2010, where the opposition Republican Party won a clear majority in the U.S. House of Representatives, establishing a clear check on the unfettered ability of the Obama administration and the former Democratic Party majority in the U.S. Congress from achieving their anti-small business objectives.*

To confirm that a clear break from the trend established since 21 November 2009 has occurred, we will to see the number of seasonally-adjusted initial unemployment insurance claim filings drop below 401,000 for the week of 27 November 2010 and to sustain that lower level in the weeks ahead.

* Most of what we describe as "anti-small business objectives" consist of a large number of regulatory policies combined with laws passed by the former Democratic Party majority in the U.S. Congress that increase the relative cost of doing business for small-to-middle size U.S. firms, or that threaten to do so in the case of potential legislation or regulations, both of which negatively affect the outlook for U.S. businesses. An important thing to note for the 2010 election results is that a key component of the Republican platform was to reverse or mitigate many of the cost-hiking provisions of the recently passed health reform law, which has clearly acted to stall the U.S. economic recovery since it was first introduced.