Deep in an underground bunker at an undisclosed location in or near Washington D.C., the federal government maintains a secret facility containing a number of large vats filled with a mysterious liquefied effluvium.

In those vats, the U.S. government sustains the surgically-extracted brains of a number of former bureaucrats and politicians. The government does this for the purpose of extracting their accumulated knowledge and exploiting their lifelong connections to make new public policies intended to solve very dificult problems. Solutions too difficult for living politicians and bureaucrats to directly propose themselves, much less implement, and live.

These disembodied brains in vats are called "commissions."

Today, the most notable commission is President Obama's Bipartisan Commission on Fiscal Responsibility and Reform, which has been tasked with the goal of producing a non-binding deficit reduction proposal by 1 December 2010, which is intended to provide sufficient political cover for today's living politicians to take a number of very unpopular steps to reduce the annual federal budget deficit.

Those unpopular options include the following: 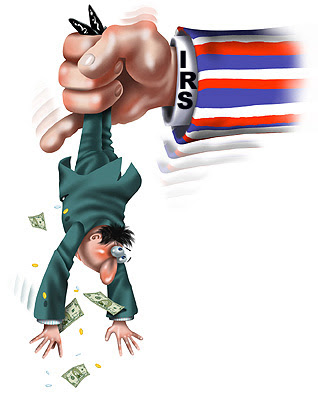 We're not joking when we suggest that the deficit commission might seriously propose raising taxes on everyone and/or everything. And as it happens, the commission is most certainly considering a tax raising option perhaps inspired by its containment unit: the Value Added Tax, or VAT.

Investopedia defines a value added tax as being "a type of consumption tax that is placed on a product whenever value is added at a stage of production and at final sale. Value-added tax (VAT) is most often used in the European Union. The amount of value-added tax that the user pays is the cost of the product, less any of the costs of materials used in the product that have already been taxed."

If you want to find out what that might mean to you, the Tax Foundation has created a new tool that puts you in the god-like role of being a brain in a vat on the deficit commission, where you have full control over how much the VAT tax would be and to what it will be applied!

Created by Nick Kasprak and Gerald Prante, the Tax Foundation's Value Added Tax Calculator lets you work out how much more you'd have to pay out of your pocket if a VAT tax went into effect in the U.S. But better than that, it also puts you in the driver seat for determining what that VAT looks like!

You can do everything from selecting a particular goal the tax would be intended to achieve, to simply setting the rate yourself and even to target how much money the government would collect through the tax. You can even select the kinds of transactions upon which the VAT would be imposed in your world!

The VAT Calculator will take these settings, along with the information you enter about your annual finances and work out how much more you could reasonably expect to have to pay on everything to which your VAT applies.

As a test case, we selected a household with 4 individuals, with the head of the household being 40 years old, and entered a household income of $60,000. We assumed our hypothetical household has family coverage health insurance through their employer, a retirement portfolio of $12,000 and home equity of $20,000. 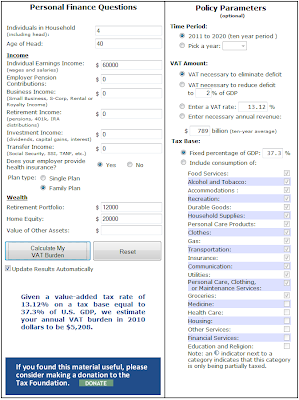 On the VAT design side where users have control over the policy parameters, we opted to consider a 10 year period (2011-2020), in which the VAT Amount would be sufficient to eliminate the projected average annual federal budget deficit of $789 billion (a rate of 13.12%), which came along with the default option of having the VAT apply to 37.3% of GDP.

With all that, we found that our hypothetical household would pay an additional $5,208 in federal taxes above what they would today if such a value added tax were applied in 2010.

We next altered the selections so that we excluded groceries and clothes from being subject to our custom VAT, along with the default exemptions for medicine, health care, housing, "other services", financial services, and education and religion.

Making those two changes lowered the tax base of things subject to the VAT to be 30.2% of GDP. In return, to maintain the objective of eliminating the projected annual budget deficit, the amount of the VAT would have to be boosted to 16.69%, which would require that our hypothetical household pay an additional $5,226 above what they would in 2010.

Then we changed our hypothetical family's income, raising it to $70,000. That increased the amount our family would pay above their current tax burden due to the VAT by $5,618. That small difference is likely due to the slightly higher level of consumption of that higher income household of the things that would would be subject to taxation under our hypothetical VAT.

One key thing to remember is that most of the tax collected through the VAT is likely to be invisible - only the final tax levied on a consumer purchase would be seen by our hypothetical household.

Overall, we find the Tax Foundation's VAT Calculator does everything we look for, and seek to build, in an online tool. It answers the questions its meant to answer and it accommodates an amazing degree of flexibility in considering various scenarios under which a VAT might be applied in the United States, making it very useful in weighing the likely impact of such a tax in your hypothetical world.

That flexibility makes for a somewhat complicated user interface, but it succeeds in making the complexity manageable. The only change we would suggest for the calculator's web designers is to switch the left and right columns, so that the results are presented in the lower right corner, which would be a more intuitive location to find this information given the layout of the tool's input fields.

What more could a brain in a vat wish for?