Compared to September 2010, the employment situation in October 2010 worsened in the United States, as 330,000 fewer people were counted as being employed during the month. 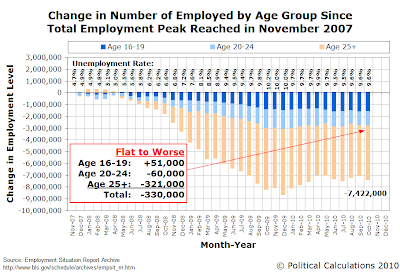 Breaking the employment report down by age group, using the household Current Population Survey portion of the employment report, teens enjoyed a small gain, with some 51,000 more individuals in the U.S. workforce, bringing the total number of employed people between the ages of 16 and 19 up to 4,312,000. Since total employment in the U.S. peaked in November 2007, one month before the country entered into recession, some 1,594,000 fewer teens are now counted as being employed.

Overall, the total decline in the number of employed individuals as of October 2010 stands at 7,422,000. This marks an improvement over the lowest point in the decline of 8,691,000 in December 2009, but is basically in line with the employment situation of March 2010 and July 2010. This suggests that the economic recovery in the U.S., while having shown some improvement, has largely stalled out since March 2010.

That outcome is consistent with the falling rate of GDP growth that we've observed throughout 2010, where real GDP went from growing at a 5.0% annualized clip in the fourth quarter of 2009 to an anemic 2.0% for the third quarter of 2010 (this latter figure is subject to revision - we anticipate that it will be revised to be slightly higher.)