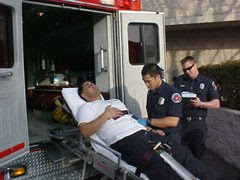 With so many politicians focused on controlling the costs of Medicare, we thought it might be time to review what the most popular medical procedures paid for by U.S. taxpayer dollars actually are.

To that end, we adapted an interactive table originally presented by the Wall Street Journal in October 2010, which describes the Top 50 procedures, services and items that Medicare paid for in 2008, including the number of each performed, which to our knowledge is the most recent data available.

But unlike the WSJ, we went the extra mile and added an extra column to show the average cost of each procedure, service or item for which U.S. taxpayers paid through their Medicare taxes.

We then also distinguished between the line items that were seemingly duplicated, such as for Office Consultations, by identifying each apparently duplicated entry with a class level. Here, we suspect that the data is actually recording different kinds of services associated with different levels of medical professionals, such as general practitioners and various kinds of specialists, which might perhaps explain the difference in the average cost of these "identical" services.

We then presented all that data in our own dynamic table, with the line items initially ranked from low to high based upon the total money estimated to have been spent on each in 2008. You can re-rank the data in the table by clicking the various column headings, either from high-to-low by clicking once, or from low-to-high by clicking the column heading a second time.

Combined, these fifty procedures add up to nearly $40.9 billion, the product of an average cost of $42.45 per procedure for well over 962 million procedures. The WSJ provided the following graphic to put that amount in context with total spending for Medicare in 2009:

To us, the most surprising item in the list is the one item that really can't be described as a medical procedure, service or item. It's Ground Mileage.

Here, despite having the second least expensive average cost of $5.75 per "procedure," it ranks as the 16th most expensive procedure for taxpayers to pay to provide to Medicare beneficiaries, as it was performed some 127,784,548 times in 2008, costing taxpayers over $730 million.

At first, we weren't really sure what might be going on there, but then we figured out that the payments are most likely for the miles that ambulances were being driven to provide service to Medicare patients, which is reimbursed by Medicare separately from en-route medical ambulance services.