Good morning, White House Staffer. Let's start with the bad news. The positive downward trend in new unemployment insurance claim filings that has existed since 18 September 2010 is now officially over.

We can see that in the clear break from the established trend in both the primary trend data: 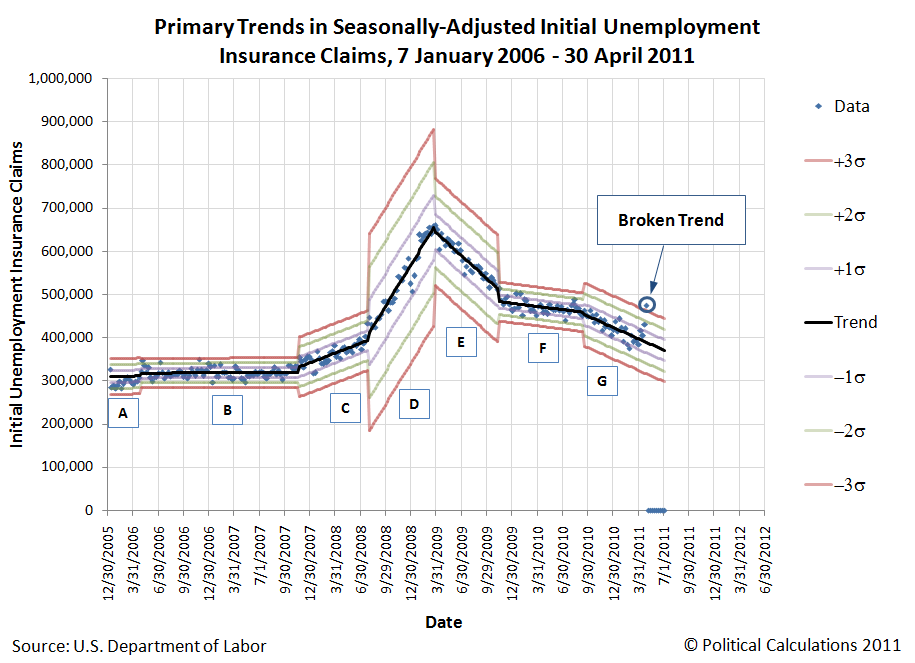 And also in the Residual Distribution for the data: 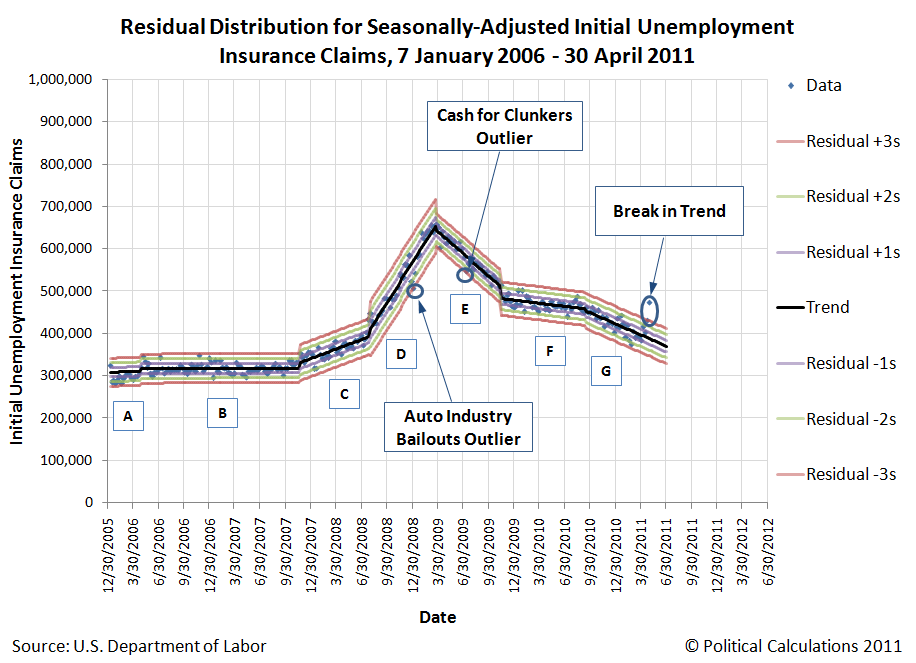 A description of the major trends shown in these two charts is available here.

It's no surprise as to what has caused this negative shift for the U.S. employment situation: this the direct effect of rapidly rising motor gasoline prices in the United States, the national average for which rose above the critical $3.50 per gallon mark in mid-March.

We know this is the case by tracking backward from the clear break in the established trend to when the data was last at or below the mean trend line established since 18 September 2010. Doing that, we identify 2 April 2011 as the last point in time at which that trend could be said to be in effect. We therefore identify 9 April 2011 as being the point in time at which the initial unemployment insurance claim filings data begins to reflect the changing economic situation in the United States, which unfortunately, is a change for the worse.

Since it takes two to three weeks for a change in the business outlook for employers to begin impacting the new unemployment claim filings, that puts the critical period during the week from 19 March 2011 and 26 March 2011. News reports from the period indicate motor gasoline prices rising above the $4.00 per gallon mark in a number of large U.S. cities, while the nationwide average climbed above $3.50 per gallon. 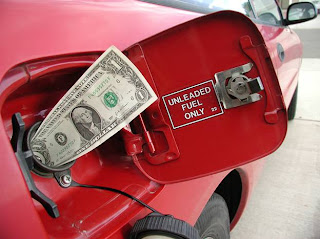 The only other major contender that could impact the outlook for U.S. employers that took place during this time is the Japanese earthquake, which disrupted worldwide production for Japanese automakers and others who rely on goods made in Japan.

We discount this possibility however because the Japanese automakers largely resumed production at roughly 50% of their pre-earthquake levels in mid-April 2011, minimizing the impact of short-term shutdowns of their U.S. plants, as they dropped to a three-day long production week during this time.

While a reduction in the number of hours worked, these reduced production measures avoid the need for these employers to have large scale layoffs, which means that these impacted workers would have no need to file unemployment insurance claims.

On the bright side, at least you don't have to worry about Osama bin Laden any more. You now have bigger problems to tackle, assuming you're serious about doing so instead of simply continuing your efforts to monitor the situation.