While members of the Obama administration and mainstream news media are really pounding home the non-farm payroll portion of the April 2011 U.S. employment situation report, which saw the number of these jobs rise by 244,000, if you look closer at the seasonally-adjusted household survey portion of the report, you’ll find that 190,000 fewer Americans were counted as having jobs in April 2011 than had jobs in March 2011. 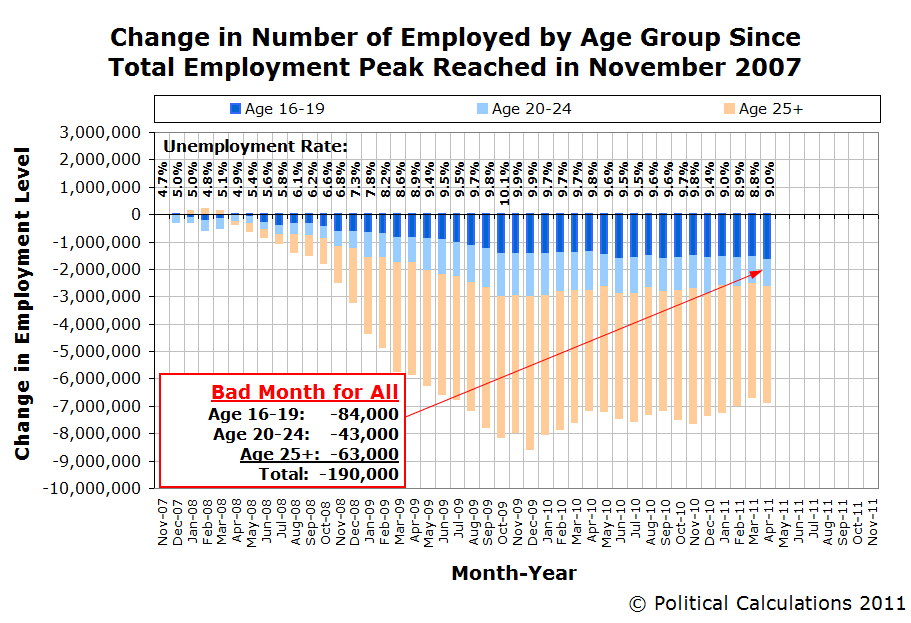 This is also the portion of the report where the unemployment rate is calculated, which is the major reason why we saw this rate rise from 8.8% to 9.0% in April 2011.

Some other interesting tidbits and observations from the April jobs report and other sources:

Remember when working at McDonalds was considered to be *the* stereotypical entry level job for American teens? In any case, that hiring will likely only bump up the seasonally-adjusted non-farm payrolls by a net 25,000 after these newly hired workers start getting paychecks.

Overall, there are 1,656,000 fewer teens working today as compared to November 2007 when the total employment level in the U.S. last peaked, a month before the recession officially began. April 2011's count of 4,255,000 employed teens is the lowest number recorded for this age group since the recession began, just edging out September 2010's previous low water mark.

We don't normally break down the Age 25+ age group into narrower age ranges, but the number of employed individuals between the ages of 25 and 44 plummeted by 348,000 from March to April 2011, with those Age 25-34 seeing 184,000 fewer workers among their ranks. By contrast, the number of people with jobs above Age 45 increased by 292,000, with most of the increase accounted for by those Age 55 or older, who saw their numbers in the U.S. workforce increase by 203,000.

A lot of the increase we see in the rising number of workers over Age 55 is demographic in nature - the very large baby boom generation (Americans born in the years from 1946 through 1964) are now in the 47 to 65 age range. Thus, the big increase in the number of people Age 55 or older who are employed isn't due to new hiring activity, so much as it is due to people who already have jobs surviving into the higher age bracket.

[Note: The net change in these age-based job numbers doesn't fully mesh with the total Age 25+ figure that's presented separately in the report, as we calculate an overall net change for the Age 25+ group of -56,000 using the data presented for the narrower age ranges. This discrepancy is likely due to the Bureau of Labor Statistics' data sampling for the household survey portion of the report, and actually represents a very small percentage error for the entire Age 25+ working population.]