What does the data really tell us about the rising minimum wage over time and the disappearance of teens from the U.S. workforce in recent years?

The question rises, again, thanks to a Wall Street Journal editorial and criticism of it, both featuring some pretty blatant politically-motivated biases on both sides of the issue.

The WSJ takes the conservative side of the issue:

Perhaps you've already noticed around the neighborhood, but this is a rotten summer for young Americans to find a job. The Department of Labor reported last week that a smaller share of 16-19 year-olds are working than at anytime since records began to be kept in 1948.

Only 24% of teens, one in four, have jobs, compared to 42% as recently as the summer of 2001. The nearby chart chronicles the teen employment percentage over time, including the notable plunge in the last decade. So instead of learning valuable job skills—getting out of bed before noon, showing up on time, being courteous to customers, operating a cash register or fork lift—millions of kids will spend the summer playing computer games or hanging out.

The lousy economic recovery explains much of this decline in teens working, and some is due to increases in teen summer school enrollment. Some is also cultural: Many parents don't put the same demands on teens as they once did to get out and work.

But Congress has also contributed by passing one of the most ill-timed minimum wage increases in history. One of the first acts of the gone-but-not-forgotten Nancy Pelosi ascendancy was to raise the minimum wage in stages to $7.25 an hour in 2009 from $5.15 in 2007. Even liberals ought to understand that raising the cost of hiring the young and unskilled while employers are slashing payrolls is loopy economics.

The opposing position, arguing that the minimum wage has had little or no effect on the decline of working teens was taken up by Invictus at The Big Picture. Here's the core of Invictus' argument:

How a minimum wage increase that was enacted first in 2007 is responsible for a teen employment/population ratio that has been declining since 2001 — throughout the other guy’s entire presidency, in fact — is not addressed. Where was the Journal as the rate declined from 44.6 when Bush took office to 30.6 when he left? Where were they when it made a historic low under Bush’s watch (August 2008)?

Back on planet Earth, the minimum wage increase has coincided with the plunge in the percentage of working teens. Before the most recent wage hikes, roughly seven million teens were working. Now there are closer to five million with a job and paycheck.

That statement is, sadly, simply false. At the time “before the recent wage hikes” (July 2007), there were 5.888 million teens employed (BLS Series LNS12000012). There are now 4.240 million employed. There have not been “seven million teens” working since the early months of the Bush administration. As for when “the plunge” actually began, see for yourselves: 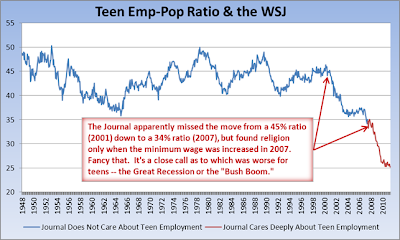 The plunge — which began on Bush’s watch and continued through his “boom” — took place during a period when the minimum wage was $5.15/hour and was not raised until 2007. No explanation for that inconvenient fact. Or the inconvenient fact that the teen employment/population ratio rose after the Sept. 1997 increase in the minimum wage to $5.15 (where it stayed until a decade later, when it went to $5.85).

Invictus goes on to argue that "teens, generally, are not eligible to make the minimum wage", which is really going off the rails in our real-world based opinion, but could there be something to the portion of his argument that's actually based on data rather than poorly understood legal trivia? Who's more right in the serious part of this fight - the WSJ's editorial writers or some anonymous blogger(s) named "Invictus"?

As some anonymous blogger(s) named "Ironman", we're going to dig into the bigger picture to work out what really was going on through Invictus' specified period of interest.

And why not us? We've long established our street cred in the econoblogosphere with respect to our coverage of the teen employment scene, but we've really only focused on the period since we began blogging (since December 2004). We've never really looked at the data for teens before that time, which is really what's at the heart of Invictus' data-based arguments.

And we'll play it all out this week. Stay tuned!