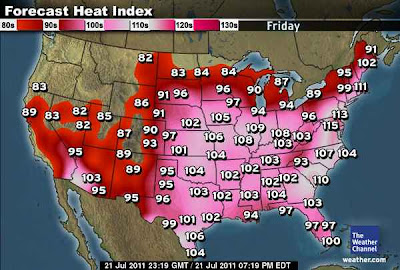 With the U.S. gripped by a heat wave, it's time once again to turn to science to solve one of the bigger problems that Americans will be dealing with this weekend: how to keep their cans of beer cold longer in triple digit temperatures (that's over 38 degrees Celsius for our metric system-burdened readers!)

And for that science, we turn to the the gang at My Science Project, who conducted one of the most unique studies we've seen into the matter. Here's how they described their first experiment, which sought to definitively answer the question "How Effective Are Beer Cozies?":

Beer drinking is one of the world’s favorite pastimes. So as the weather started heating up, we felt a scientific duty to investigate this burning beer-related question: what is the most effective beer can cozy?

We took temperature measurements using a digital thermometer with a metal probe. In most of the experiments, the probe was submerged 5.5 cm into the beer, at the approximate midpoint of the can. All experiments were performed outdoors, with ambient temperatures varying from 90F (32.2C) to 103F (39.4C). Except as noted, all beverages used were 12 oz. (355ml) domestic beers. The starting temperatures for the beers ranged between 35.7F (2.1C) and 43.7F (6.5C)

See? It really is science! Here are the beer cozies they tested:

Here are their conclusions for this first experiment:

Depending on their material, beer can cozies can be effective in keeping beer cool even in extremely hot weather. The two cozies that performed the best employed a layer of dense foam about half an inch thick, which prevents heat transferring into the cans and the beer by limiting convection and conduction. A cheap beer cozy can be just as effective as a more expensive cozy, provided you get the right type. On the other hand, an ineffective can cozy, while it may improve your grip on the can or keep your hand dry, will not do much to keep your beer cold.

See? It's science that you can even use! Next, they tested bottle cozies, finding that they're effective, especially if they're lighter colored.

But getting back to the can cozies, they also tested the "Cadillac" of cozies, Thermos' Thermax Can Insulator (similar to this model), to see how it might stack up against the foam competition. We'll let the results speak for themselves:

Results: We waited…for a full three hours, to verify the manufacturer’s claims. We found that the Thermos can cozy did indeed outperform the two most effective cozies from our previous trials, a traditional foam can cozy, and the pewter and foam Jeff Gordon commemorative NASCAR cozy. After one hour, the beer in the Thermos can holder was 53.4F (11.9C), compared to 58.6F (14.8C) in the foam cozy and 58.2F (14.6C) in the pewter and foam cozy. The uninsulated can was 69.2F (20.1C). So, it lived up to one of its claims by outperforming any cozy we could find.

In this experiment, we faced three types of carbohydrates off against a typical beer can cozy. The bagels and donuts we prepared in a similar manner – cutting a can-sized section out of the middle and stacking them three high. The Rice Krispies Treat beer cozy was a more elaborate production, which we have fully detailed here.

And now, the findings:

All of our food-based can cozies worked to some degree, but the Rice Krispies Treat cozy stole the show. We theorize that its superior insulating ability probably comes from the thickness of the material combined with the Styrofoam-like quality of the Rice Krispies Treats. And as gratifying as it would have been to see a successful synergy between beer and donuts, the bagels were slightly better insulators, perhaps because they are denser than the raised glazed pastries.

We'll close our Friday post with an image of the winning beer cozy: 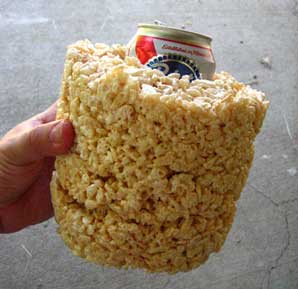