Here's the picture we've been looking at since the S&P 500's dividend futures for 6 September 2011 were released late on Friday, 2 September 2011: 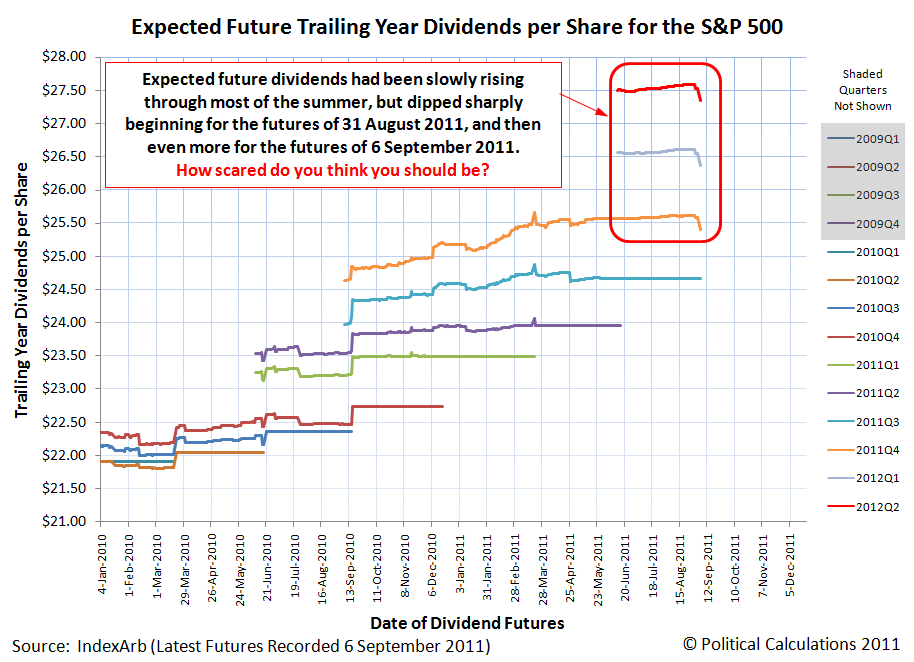 To answer the question of "how scared do you think you should you be?" by the sudden downturn we observe in the S&P 500's dividend futures, we first need to determine what's behind the projected decline that we've been observing since 30 August 2011, when the dividend futures for 31 August 2011 were released.

If it is the result of a data anomaly, which could be anything from an adjustment in the estimated value of the S&P 500's divisor, to a re-weighting of the future dividends to be paid out by the publicly traded companies that make up the S&P 500 index, or just a good old-fashioned typo, then there's not much to be worried about.

But if there is a more fundamental change in the outlook for future dividend payments that might be realized by owning shares of stock, then we can expect stock prices today to adjust to the change in those fundamental expectations.

During the stock market collapse beginning in January 2008, we frequently observed declines in the stock market's dividend futures that preceded proportionately amplified changes in stock prices.

We'll find out for sure on Tuesday, 6 September 2011 when the U.S. stock market will open following the Labor Day holiday weekend. If it's anything like what's happening in the European and Asian markets today though, which aren't closed for the U.S. Labor Day holiday, investors can expect to be in for a rough ride down.