Political Calculations
Unexpectedly Intriguing!
November 10, 2011
Whose Income Should You Tax?

Pretend for a moment that you've just been elected to public office and that you now have the power to choose whose income you're going to tax to pay for all the vital government programs you believe should be supported. If you want to keep those vital government programs on a sound financial footing, without jeopardizing the well-being of the people who rely on those programs in hard economic times, upon whose income should you most rely for your income tax revenue?

Before you answer, consider the following chart, which is based on data from the IRS, as collected by the Tax Foundation: 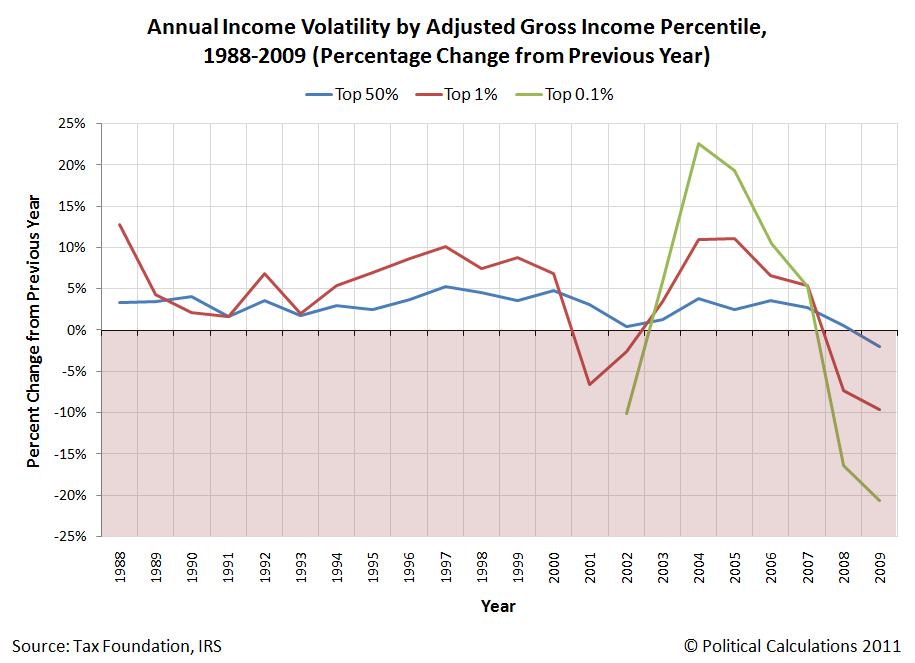 The answer should be obvious, unless perhaps you're a member of the California State Legislature. Fortunately, the Tax Foundation has a golden opportunity just for you! Jumping straight to the conclusion:

A state that faces economic decline and an exodus of population has two choices. One is to ramp up state spending on education and infrastructure and offer targeted tax incentives for selected industries, and hope that these inducements will lure people back. All state governments do this to some extent, notwithstanding the risk. At best, however, these investments will take decades to pay off. At worst, the fate of Michigan could be more common: people take their degrees from the excellent state schools and use the excellent roads to drive to other states where there are jobs.

The other choice is to reduce reliance on burdensome and volatile revenue sources, prioritize state services and pare back on the non-essential, and set out a welcome mat of a simple, transparent, neutral, and stable state tax system for all. If tax increases have to occur, structure them in a way that spreads the burden and addresses spending growth. Such a choice will not generate billions of dollars immediately to recover from years of borrowing and spending beyond means. But it will lay the groundwork for long-term economic growth and ensure that the Golden State's tarnished decade will not continue forever.