Four years ago, the number of employed Americans peaked at 146,584,000 in November 2007, just ahead of the U.S. economy itself peaking in December 2007, which marked the starting point for the nation's most recent economic recession.

Through November 2011, four years later, the number of employed Americans has fallen to 140,480,000. Just over six million fewer Americans are working today than were four years ago. 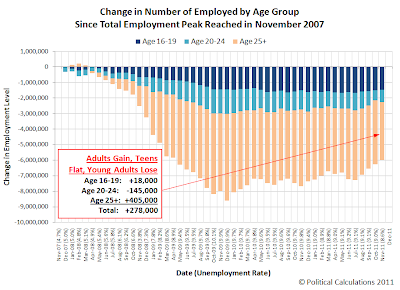 Overall, the jobs situation in November 2011 brightened for most Americans from October 2011, especially for those Age 25 and older, whose numbers in the U.S. workforce grew by 405,000 during the month.

Young adults however were on the losing side of the employment picture however, as 145,000 fewer individuals between the ages of 20 and 24 were counted as being employed than were in October 2011. That's disappointing because young adults had been seeing the largest gains in the number of employed in each month since July 2011, at least, until now.

Meanwhile, the employment situation of American teens continued to improve very slowly, as only 18,000 additional individuals between the ages of 16 and 19 were counted as having jobs in November 2011.

Today, the jobs lost by teens account for nearly 1 in 4 of all jobs lost since the United States entered into recession in December 2007. That's remarkable because teens represented just 3.1% of the entire U.S. workforce in November 2011. Four years ago, teens made up just 4.0% of the 6,004,000 member larger U.S. workforce.

Continuing to break down the data, young adults today represent 9.4% of the U.S. workforce, while accounting for 13.1% of the total number of jobs lost in the U.S. economy since November 2007.

Adults Age 25 or older make up the remaining 87.5% of today's U.S. workforce. Through November 2011, these individuals account for 62.0% of all the jobs that have been lost in the last four years.