Did you know that the most downwardly mobile members of society are millionaires? 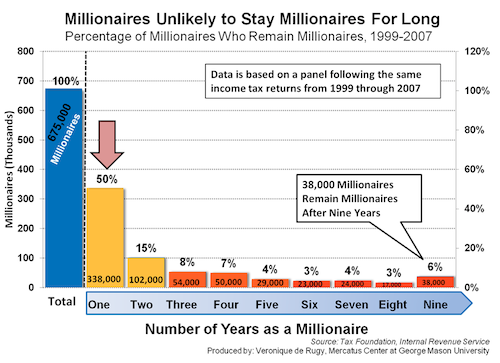 It's true, and what's more, we have the data and math to prove it!

Our featured chart today was originally produced by Veronique de Rugy of the Mercatus Institute, which is based upon data from the IRS and analysis by the non-profit Tax Foundation.

Here, the story begins in 1998, when the IRS reports that there were approximately 675,000 tax returns with adjusted gross incomes of $1 million, or more.

[Side note: The traditional definition of a millionaire was someone who had accumulated at least one million dollars in total assets. However, since the word was first documented back in 1826, the effect of inflation is such that perhaps a more modern definition would be those who earn incomes of at least one million dollars in a year. In any case, $45,000 in 1826 dollars is roughly the equivalent of $1 million in 2012, going just by changes in the Consumer Price Index.]

Then, beginning in 1999, following the tax returns filed by the same people, the number of those with incomes over $1 million begins to drop dramatically - by nearly 50% in the first year!

Expressed a different way, the probability that a millionaire after eight years would be able to make $1 million or more is just 2.5%!

And that's the math our newest tool tries to estimate! Just enter the number of years after which a millionaire has made a million dollars, and we'll give you the odds that they will have done it again!

In a sense, this is very similar to an exponential decay function, such as might apply for things like the decay of radioactive materials, or pesticides. Unlike those things however, the half life of a millionaire is much, much shorter!

One thing we do note from the actual data is that the number of millionaires after nine years begins to increase (38,000 represents 5.6% of the original number of millionaires in 1998). We suspect this is due to a combination of factors, including the effect of inflation from 1999 through 2007 and also the economic expansion that peaked in that year.

It would be very interesting to see how those millionaires have fared in the years since! How many would you think are still making over $1 million per year for the recession years of 2008 through today?

Update 4 February 2012: A sharp-eyed reader has a different take on what the data presented in the chart is actually communicating:

It seems that the number in column N is not the number of "those who were in the original 675,000 while still making a million N years later" as you suggested in your paper. According to that interpretation people would be counted repeatedly in several columns, and it would be a miraculous coincidence that the numbers in all nine columns add up to exactly to the total 675,000 (and the percentages adding up to exactly 100).

If I'm right the number of millionaires by the end of the 8th year is not 17000, but rather 38000. More generally, the percentage of "those who remain millionaires N years later" should be 50, 35, 27, 20, 16, 13, 9, 6. Naturally this curve is much smoother and fit better with an exponential than the original figure which designate the differences between these numbers.

Also, the "increasing" in the last column you mentioned would not surprising at all and may not need any special explanation. This is because the 38000, unlike each of the columns on its left which designates those remain millionaires for exactly N years, designates all those who remain millionaires for 9 years, 10 years, 11 years and more. It's just the sum of all the residue part of the declining curve.

Although, I'm really confused since the original article seems to suggest the same interpretation as yours. But if that's the right interpretation then I do not know how to make sense of the fact that those numbers sum up to exactly 675,000, among other things.

Our reader's interpretation of the data is right on the money - we've re-done our tool to match!