How many people filed for new unemployment insurance benefits in the first week of January 2012?

We'll find out the answer to that question later this morning, but in the meantime, we can make a pretty good guess using our updated forecast chart for the number of seasonally-adjusted initial unemployment insurance claims filed each week! 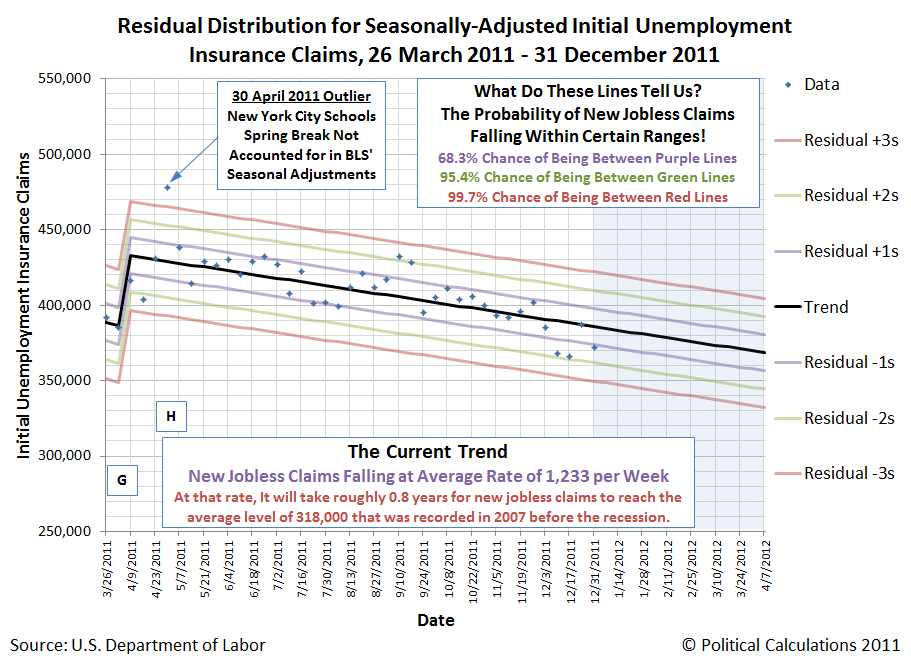 Assuming the trend established since 9 April 2011 remains intact, and that the variation of individual data points with respect to that mean trend line follows a normal, bell-curve kind of distribution, we can give the following odds that the number of seasonally-adjusted new jobless claims for the week ending 7 January 2012 will fall within the indicated ranges:

Using our statistical control chart-inspired methodology, should the number of seasonally-adjusted initital unemployment insurance claim filings for the week ending 7 January 2012 come in either below 348,469 or above 420,717, it would be an indication that the trend established since 9 April 2011 is potentially breaking down.

As you can see though, it's been going pretty strongly for nearly eight full months now. If it continues through the end of March 2012, it will be very unlikely that we'll see the number of new jobless claims climb above the 400,000 mark, where it spent much of 2011.

In looking deeper at the chart, we see some indications that the established trend may indeed be breaking down. Here, in going from 17 September 2011 to 24 September 2011 and then again from 26 November 2011 to 10 December 2011, we see that the volatility in the number of new unemployment benefit claim filings being recorded each week has increased.

If that continues, the big unknown for us right now is that we don't know yet which way the numbers will break! 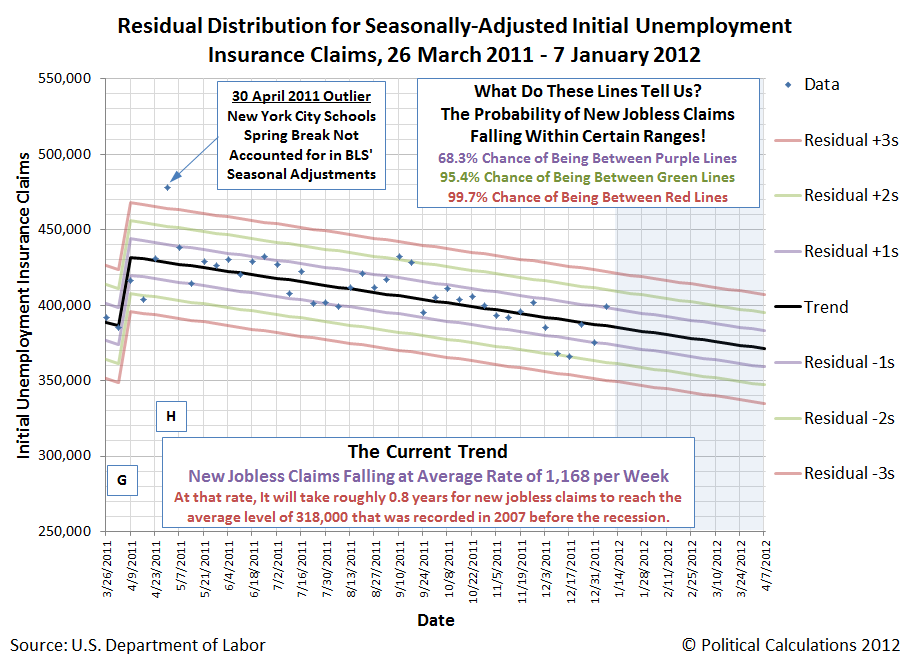 Today's new jobless claim value of 399,000 was just outside our 68.3% probability range. Given the BLS' track record in under-reporting the actual number of new jobless claims each week, we can reasonably expect that the figure for the week ending 7 January 2012 will be revised upward in the next report to be 400,000 or higher.

Today's number also underscores the increasing level of volatility in the data - when the current trend was establishing itself, it was characterized by relatively small changes in the number of new jobless claims being filed from week to week.

Today new data marks the fourth time in the last six weeks in which the size of the change in the reported numbers from week to week has exceeded one standard deviation. That's specifically what we're looking at when we suggest that the established trend may be beginning to break down.