Now that we've revealed the pace at which the most prolific abortion providers in the United States conduct their business, it's time to consider their primary motivating factor behind achieving such economies of scale: revenue.

To do that, we'll need to determine the average amount of money collected for each abortion performed in the United States based upon their annual caseloads. Fortunately, the Guttmacher Institute has once again collected the data we need to construct a model by which we can estimate the average price paid for an abortion in the U.S. depending upon the annual volume of abortions performed by the provider.

We've summarized what we found in the chart below, which applies to all abortions provided in non-hospital settings that are performed at approximately 10 weeks of gestation. (As we noted in our previous post, abortions performed in hospitals predominantly are done for medical reasons, where at least a portion of the price paid might be covered by a patient's health insurance.) This data then encompasses the average prices paid that apply for over 80% of all abortions performed in the United States. 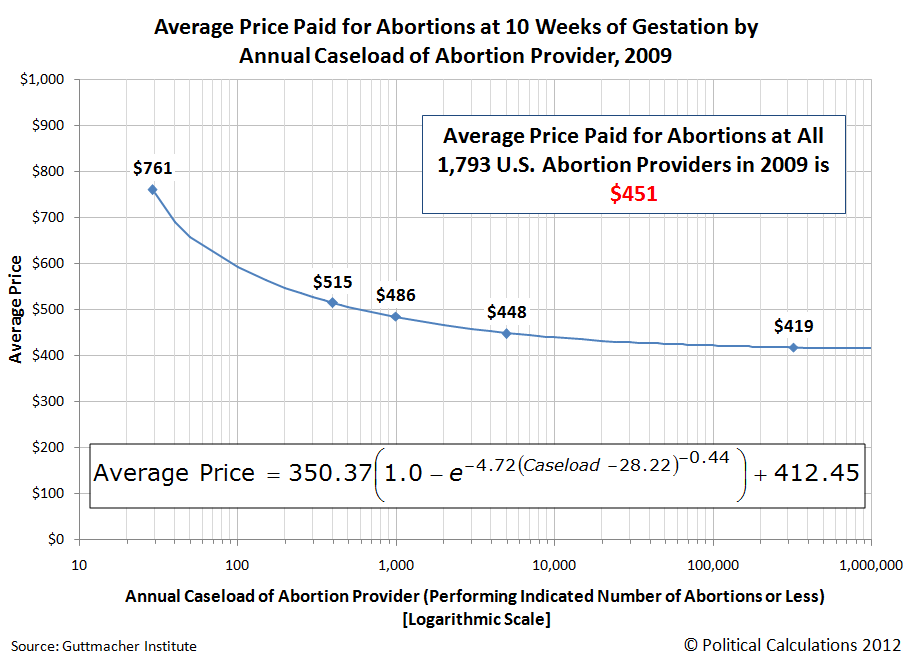 We next took the mathematical relationship we modeled based upon the Guttmacher Institute's data and built a tool, which will allow us to estimate the average price paid for an abortion according to the provider's annual caseload for the procedure. Given the difference between these average prices and the median price charged by non-hospital abortion providers as reported by the Guttmacher Institute, we believe our tool's results will be within 5% of the actual values.

We then went the extra mile to estimate the abortion provider's annual revenue from performing abortions.

For the default data, we find that an abortion provider that performs 1000 abortions per year will collect an average of $484 from each patient, generating over $484,100 in a year.

Plugging in Planned Parenthood's total reported abortion count of 324,008 for 2008 into the tool suggests that the average price paid by a patient at their clinics is $418.61, which would put their annual revenue for performing this volume of abortions at $135,633,517.

That annual revenue figure could actually be higher though, since we omitted later term abortion price data from our model. Consequently, this value would represent a low-end estimate of Planned Parenthood's total revenue from performing abortion procedures in 2008.