If you think about it, the Academy Awards ceremony is really just a three to four (or more!) long televised advertisement for the "Best Picture" winner. 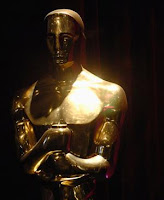 Our question about the Oscars this year: Can host Billy Crystal keep enough of the television audience engaged in the broadcast for long enough to be able to sell more tickets than would otherwise be sold to whatever movie wins that title?

Sure, he'll be dressed in a tux and will look like the guy who sells you movie tickets behind the bullet-proof glass at your local cineplex, but why should Hollywood have to count so much on Billy Crystal to sell their movie tickets?

That question is super-relevant this year because of the unmitigated disaster that was the 83rd Annual Academy Awards ceremony last year! That was when so much of the U.S. audience tuned out during the poorly written and directed live broadcast that the movie's box office plummetted by 15%, as the Best Picture winner took in *LESS* money at movie theaters in the week after the Oscars ceremony than it did in the week before.

It's true! We went back and compared the one-week before and one-week after box office totals for all the Best Picture winners announced since 2000 to see just how each did, using the daily box office data for each as reported by Box Office Mojo, and then calculated the percentage increase or decrease in the week after the Oscars as compared to the week before.

Our data is presented in the table below:

Since 2000, the box office take of the Academy Awards' Best Picture Winner increases by an average of 22% in the week following the Oscars ceremony as compared to the week before, with the best performance being turned in by Gladiator, which was very near the end of its run in theaters when it won.

The worst however was last year's announced winner The King's Speech, which dropped like a rock after it won. Its only competition for losing money was the Best Picture winner announced in 2007, The Departed, the ceremony for which was also negatively reviewed.

By contrast, the years for which we have data in which Billy Crystal hosted the Oscars (2000 and 2004) saw the box office take for the Best Picture winners jump upward by an above average of 43% - more than double the average post-Oscar bump. It's no accident that Billy Crystal is back....

There just aren't many Oscar hosts who are as gifted at selling movie tickets!