It has been several weeks since we last looked at the trend in the number of new jobless claims being filed in the U.S. each week. Our chart below shows how things stand through the initial report for 19 May 2012, which has about a 98% chance of being revised upward later today: 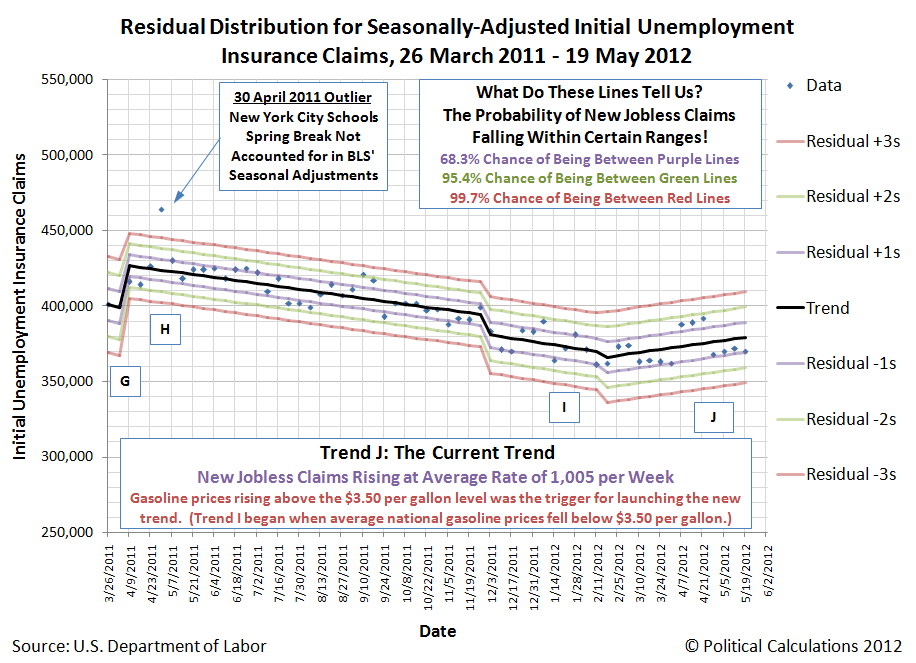 The good news is that the number of initial unemployment insurance benefit claim filings since 11 February 2012 is rising at an average rate of 1,005 per week, but really, that's only good news in contrast to the average increase of 2,497 per week it was clocking just over one month ago!

As we've noted before, gasoline prices appear to have the ability to shift the trajectory of the trend in the number of new jobless claims filed each week once they rise above an inflation-adjusted $3.50 per gallon. Above this level, it would seem, the combination of the increased costs of doing business and the reduction in revenues as consumers are forced to use their limited dollars to buy gasoline instead of other things they might rather have can affect the bottom line of businesses by enough to affect their employee retention decisions.

If we're lucky in the short term, we'll see if the rate of layoffs that prompt new unemployment insurance claim filings shifts to a new, more positive trajectory if gasoline prices fall back below the $3.50 per gallon mark in the weeks ahead.

But then, we'll be unlucky in the longer term because that will mean that the world demand for oil will have dropped enough to make that possible, as much of the world appears headed for recession. That of course will have consequences for the U.S. economy.

In the meantime though, we continue to expect the U.S. economy will rebound a bit in the third and fourth quarters of 2012, after passing through the equivalent of a microrecession during the current second quarter. The story for 2013 will be very different, we're afraid....