Political Calculations
Unexpectedly Intriguing!
June 4, 2012
The Jobs Picture for May 2012

By now, you've heard that the May 2012 jobs report was really dismal. And why wouldn't you think that, especially if you go by the portion of the report that says that the U.S. economy only added 69,000 jobs in May 2012.

That portion of the report is based upon the so-called "Establishment Survey", which the Bureau of Labor Statistics puts together based upon the responses it obtains from surveys sent to established employers.

But what about the other portion of the BLS' monthly employment situation reports? The portion based upon the so-called "Household Survey"? After all, this is the part of the report that provides the official unemployment rate for the nation, which clocked in at 8.2% in May 2012. What did it say about jobs gained or lost from the previous month?

Would you believe it indicates a month-over-month net gain in the number of employed Americans of 422,000? 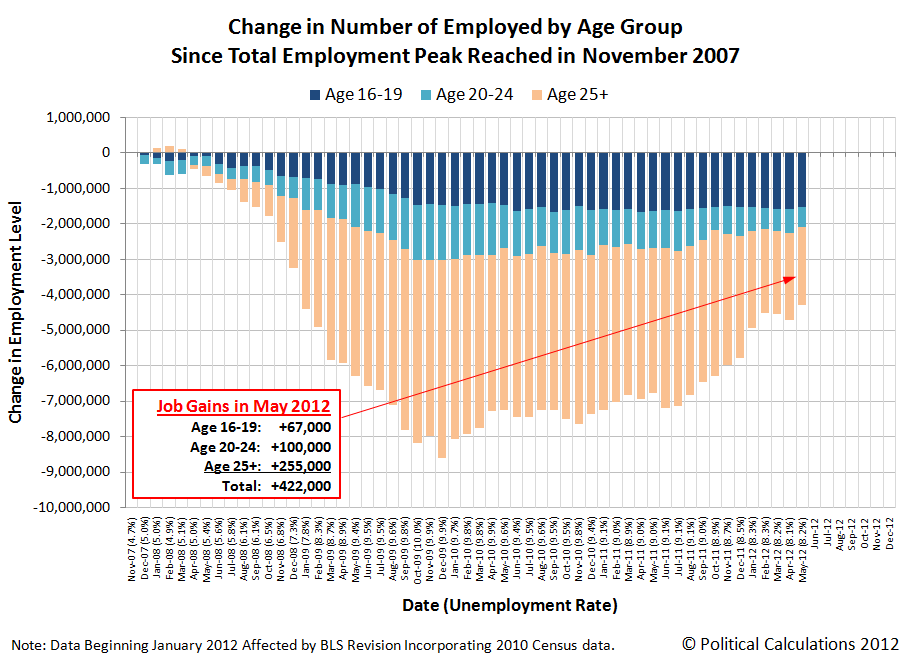 Breaking that down by age group, teens saw their numbers in the U.S. workforce rise from the previous month by 67,000, while young adults between the ages of 20 and 24 saw their numbers increase by 100,000. Adults Age 25 or older saw the biggest month-over-month increase, with 255,000 additional individuals counted as being employed.

In fact, if we look purely at the net loss of jobs since the total employment level peaked in November 2007, just ahead of the recession, May 2012 was the best month since January 2009, when Barack Obama was sworn in as President. And coincidentally, the unemployment rate recorded for that month was 7.8% - very close to the 8.2% just reported for May 2012.

So why isn't President Obama's re-election campaign doing more to trumpet these numbers? It's not like the White House isn't trying....

The answer comes down to the data. The Establishment Survey of the report is considered to be more accurate than the Household Survey, which accounts for its greater emphasis in media reporting. According to the BLS' FAQ, that includes some 141,000 businesses and government agencies, spanning some 486,000 work sites across the United States.

By contrast, the Household Survey is based upon a monthly survey of approximately 60,000 households in the U.S., which doesn't provide the same level of detail as the Establishment survey.

And for Barack Obama's continued presidential aspirations, that made the May 2012 employment situation report a very bad one, which was even recognized by his Secretary of Labor:

In retrospect, it probably would have made more sense for the President to pivot to jobs at some point during his presidency and focus like a laser on promoting job creation rather than whatever else it is that he has been doing all this time.