That's very old news to readers of Political Calculations, a little-read blog that somehow managed to scoop a number of financial institutions and even the New York Times in reporting on the poor health of China's economy back in February 2012.

At least now we know why so many of these organizations were so far behind the curve in understanding that a large-scale slowdown in China's economy has been underway for nearly seven months now - they appear to actually rely upon the Chinese government for their economic data. The New York Times might perhaps be finally recognizing that error in judgment:

HONG KONG — As the Chinese economy continues to sputter, prominent corporate executives in China and Western economists say there is evidence that local and provincial officials are falsifying economic statistics to disguise the true depth of the troubles.

The article goes on to detail evidence of the slowdown that has shown up in recent months, mostly from an accumulation of stocks of coal, copper and other commodities, including the nation's rates of electricity production and consumption, which had previously been taken as a good measure of China's overall economic health.

But the thing that stands out to us is that they've known for decades that China's economic statistics were less than trustworthy, although for completely predictable reasons, they have become more unreliable during the past year:

Questions about the quality and accuracy of Chinese economic data are longstanding, but the concerns now being raised are unusual. This year is the first time since 1989 that a sharp economic slowdown has coincided with the once-a-decade changeover in the country’s top leadership.

Officials at all levels of government are under pressure to report good economic results to Beijing as they wait for promotions, demotions and transfers to cascade down from Beijing. So narrower and seemingly more obscure measures of economic activity are being falsified, according to the executives and economists.

"The government officials don’t want to see the negative," so they tell power managers to report usage declines as zero change, said a chief executive in the power sector.

As a result, a number of global financial institutions, who rely on China's economic data in assessing the potential for their investments in the country, were effectively caught with their pants down earlier this month:

Many Chinese economic indicators already show a slowdown this spring, with fixed-asset investment growing at its weakest pace in May since 2001. The annual growth rate for industrial production has edged below 10 percent, while electricity generation was up only 3.2 percent in May from a year earlier and up only 1.5 percent in April.

The question is whether the actual slowdown is even worse. Skewed government data would help explain why prices for commodities like oil, coal and copper fell heavily this spring even though official Chinese statistics show a more modest deceleration in economic activity.

Manipulation of official statistics would also provide a clue why some wholesalers of consumer goods and construction materials say sales are now as dismal as in early 2009.

Whoops! When the economic tide shifts, the worst thing that anyone in the financial world can be is late. Millions, and perhaps billions, of dollars are lost whenever that happens.

So how did a little-read blog manage to report that China's economy had fallen into recession over five months ago, well ahead of all these other venerable institutions?

Easy. That little read blog didn't use China's statistics to assess that nation's economic health. Instead, we used data collected and reported by the U.S. Census on the monthly value of the international trade between the two nations, which we think would be pretty difficult for Chinese officials to fabricate. As it happens, we've found that the year-over-year growth rate of that trade makes it possible to accurately diagnose the relative economic health of each nation, making this kind of analysis an excellent alternative to China's official government statistics for assessing the actual state of that nation's economy.

Speaking of which, here is what it looks like today: 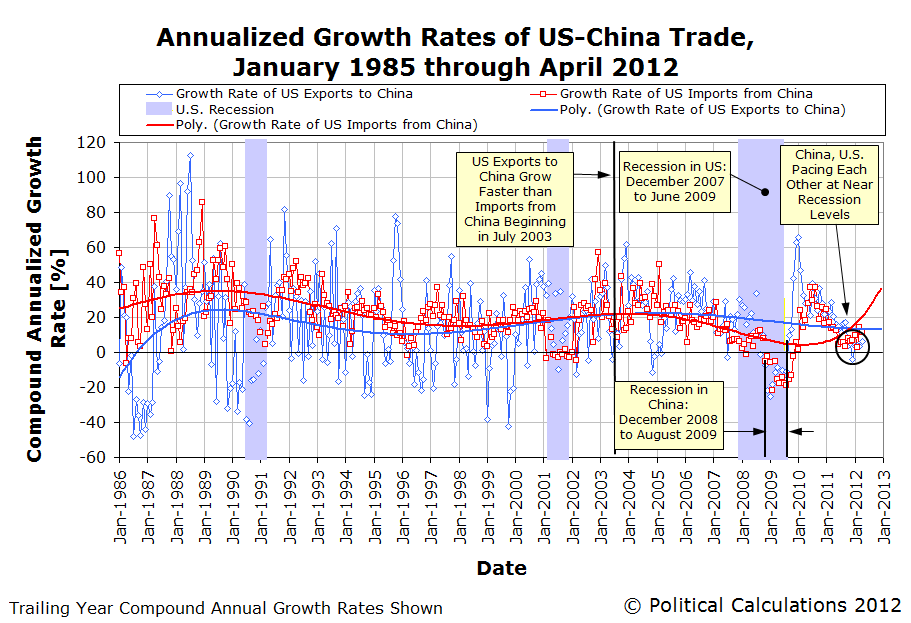 In this chart, assessing China's relative economic health may be done by examining the data series shown with the blue data points, which correspond to the year-over-year growth rate of U.S. exports to China. Here, a national economy will demand more goods and services from outside its borders when it is is experiencing strong economic growth, which shows up as a positive growth rate - the more strongly the economy grows, the higher the positive value.

But when that growth rate turns negative or is near-zero, which we'll define as growing at just single digit rates, that communicates that the national economy in question is experiencing at least a significant economic slowdown.

What we observe in our chart above is that China's economy is trudging along at a very sluggish pace. And for all practical purposes, has been since October 2011.

Meanwhile, the data series shown with the red points, which correspond to the year-over-year growth rates of China's exports to the U.S., indicate that as of April 2012, the U.S. economy has been growing more strongly than the Chinese economy.

With the U.S. economy now passing through the equivalent of a microrecession however, we anticipate the May 2012 trade data will fall back toward the zero growth line on the chart.

But then, we didn't rely on the U.S. government's official economic data to work out that the U.S. economy would be struggling at this point of time. We used an alternative data source to first make that call over a year ago....

It's just a good practice to not rely too much on "official" data reports, which can frequently be really off track. That's also a big reason why our readers our rarely surprised by sudden and unexpected economic news.