Having previously featured the best mousetrap ever, which was invented in 1881, we decided to see if there were any modern day patents that might compare in creativity.

And then we found the invention we're featuring today.

The invention we're featuring today is real. Really. You can look it up at the U.S. Patent and Trademark Office, under its patent number 6,293,874, which was issued on 25 September 2001, if you don't believe us.

It, as it happens, is, well, there really aren't any words we can use to describe it, so we'll let its inventor, Joe Armstrong of Lenoir, Tennessee, explain it via the patent's abstract, which describes, and we kid you not, a "User-operated amusement apparatus for kicking the user's buttocks". Really. We can't make this stuff up....

An amusement apparatus including a user-operated and controlled apparatus for self-infliction of repetitive blows to the user's buttocks by a plurality of elongated arms bearing flexible extensions that rotate under the user's control. The apparatus includes a platform foldable at a mid-section, having first post and second upstanding posts detachably mounted thereon. The first post is provided with a crank positioned at a height thereon which requires the user to bend forward toward the first post while grasping the crank with both hands, to prominently present his buttocks toward the second post. The second post is provided with a plurality of rotating arms detachably mounted thereon, with a central axis of the rotating arms positioned at a height generally level with the user's buttocks. The elongated arms are propelled by the user's movement of the crank, which is operatively connected by a drive train to the central axis of the rotating arms. As the user rotates the crank, the user's buttocks are paddled by flexible shoes located on each outboard end of the elongated arms to provide amusement to the user and viewers of the paddling. The amusement apparatus is foldable into a self-contained package for storage or shipping.

This is one of those times where a picture really is worth more than a thousand words: 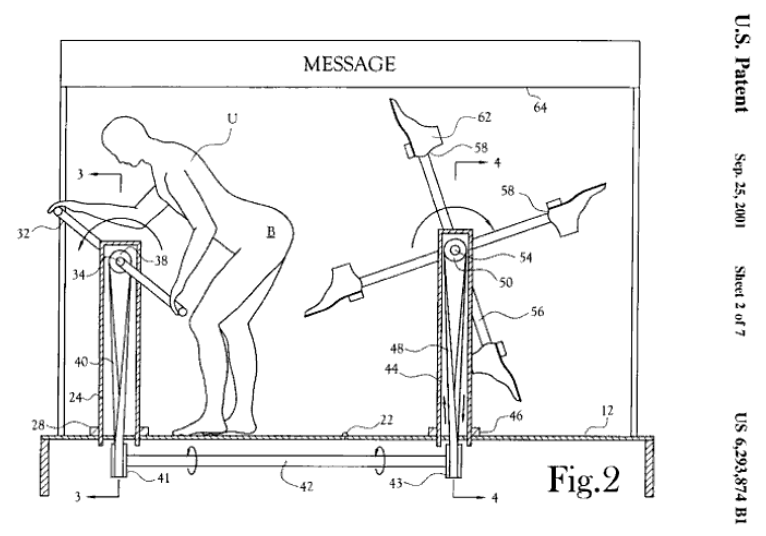 You know, on second thought, perhaps we should build one of these for the patent examiners who approve stuff like this, who clearly need this kind of self-training device!...