Do high gasoline prices affect the number of layoffs in the United States?

We're going to put our empirical observation-backed hypothesis that "Yes. Yes They Do" to the test during the next several weeks to see if we can get a solid answer to that question!

Here, we're defining "high gasoline prices" as being when the average price of a gallon of regular (unleaded) gasoline in the U.S. exceeds $3.50 per gallon in terms of 2011-12 U.S. dollars, as reported by the U.S. Energy Information Agency. We're also measuring the number of layoffs in the U.S. by the number of seasonally-adjusted initial unemployment insurance claims that are filed each week, as reported by the U.S. Department of Labor.

The test we're about to run hinges on an event that occurred in the week between 18 June 2012 and 25 June 2012, when the average price of gasoline in the United States fell back below the $3.50 per gallon mark.

Here, if our hypothesis holds, we'll see a shift in the trend for new jobless claims being filed some two to three weeks later, as employers react to this positive development which reduces their cost of doing business and also increases the disposable income of U.S. consumers after their current pay cycle ends and their next pay cycle begins.

Since most people in the U.S. are paid on a weekly, biweekly, or semi-monthly basis, that means a two to three week delay between when an event affecting employee retention decisions takes place to when it actually shows up in the weekly data for new jobless claims in the U.S.

After that, it can take several weeks longer to confirm the change in trend. Speaking of which, our chart below shows the previous two trends, along with the current trend: 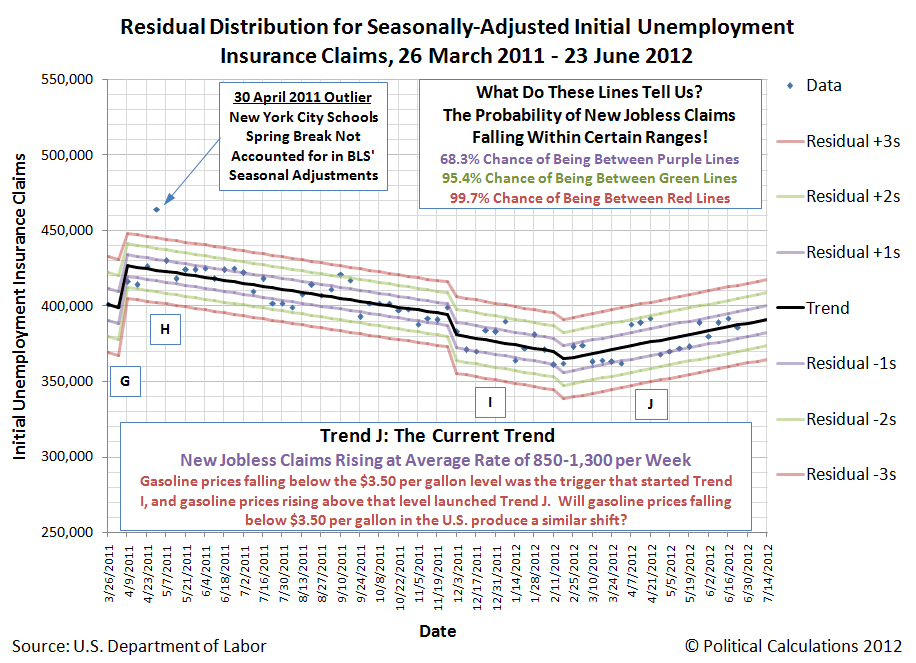 We could see a shift begin as early as this week or next, however we expect it will be several weeks beyond that before we could confirm such a shift in the trend, given the effect the Fourth of July holiday will likely have on data reporting and the BLS' continuing issues with upward revisions to their initially-reported data in subsequent weeks.