How much of an effect do high gasoline prices have upon the rate of layoffs in the U.S. economy?

Today, following the initial confirmation of our hypothesis that they do have a significant effect as measured by the number of new jobless claims filed every week, we're going to attempt to quantify how big an impact that high gasoline prices has upon the employee retention decisions of U.S. employers.

We define "high gasoline prices" as being when the national average price of a gallon of regular unleaded gasoline in the United States rises above $3.50 per gallon, in terms of 2011-12 U.S. dollars. This price level appears to be significant in affecting both the spending of U.S. consumers, who respond by cutting back their spending on other goods and services, and the cost of doing business for U.S. employers, who face higher fuel and transportation costs, both directly and indirectly through their supply chains.

The two-to-three week long time lag between when the price of gasoline crosses this critical level to when it shows up in the BLS' new jobless claims data may be attributed to the typical payroll cycle of U.S. businesses, where they react to the change in their business outlook with their next payroll cycle - allowing the current payroll cycle to play out. Since the vast majority of Americans are paid weekly, biweekly or semi-monthly, the time-delayed reaction of employers to an event affecting their employee retention decisions to when in shows up in the government's official data is about 2 to 3 weeks.

We have previously attributed the last four shifts in the major trends for new jobless claims in the U.S. to the national average gasoline price crossing the apparently critical threshold of $3.50 per gallon. And because it just rose above that level on the week ending 30 July 2012 after having fallen below it just several weeks before that, we anticipate we'll see a significant upward shift with either this week's jobless claim data or with next week's data.

That's the "coming surge" we described in the title of this post. But how big will that surge be? 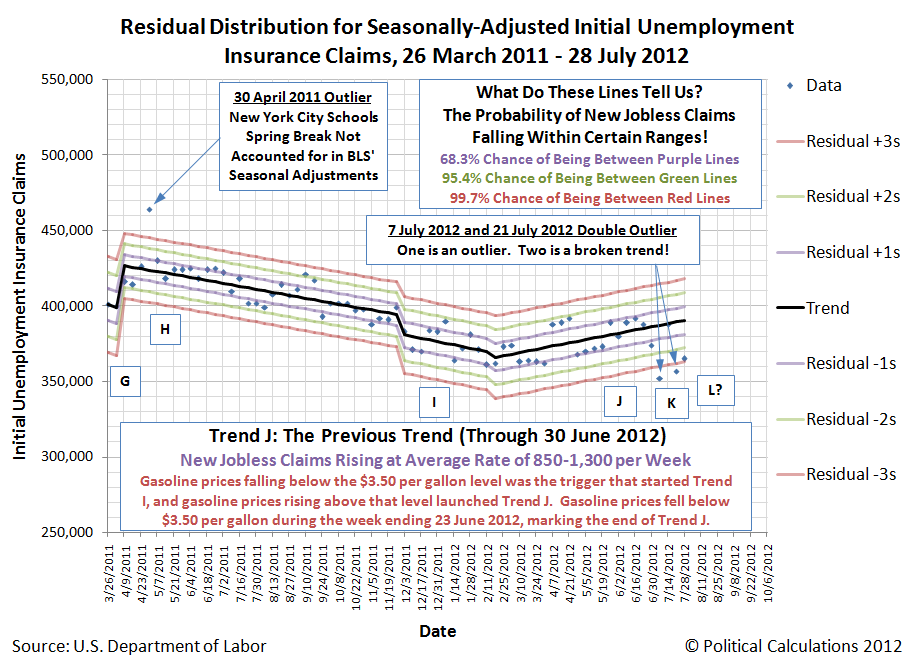 Looking over the past four shifts in the major trends for new jobless claims, we would anticipate that having average gasoline prices in the U.S. rise above $3.50 per gallon will add anywhere from an additional 15,000 to 25,000 to the number of people filing for first-time unemployment insurance benefits each week while gasoline prices remain high.

That brings us to our next problem: volatility in the data.

Previously, we had the benefit of gasoline prices remaining steadily either above or below the $3.50 per gallon mark for extended periods of time, which makes it relatively easy to measure the size of the shift in new jobless claims.

But with gasoline prices hovering so close to the apparently critical threshold of $3.50 per gallon right now, we can expect to see quite a bit of volatility in the weekly data for new jobless claims, as the shifts we describe are combined with natural statistical variation about the underlying trend for new jobless claims, which has been rising since mid-February. And especially if the average price of gas in the U.S. keeps crossing the threshold!

As a result, we could very well see some pretty dramatic swings from week to week until gasoline prices stabilize either above $3.50 per gallon or below it.