The BLS' report on the number of new jobless claims filed in the week ending 15 September 2012 indicates that the pace of layoffs in the United States is accelerating at the fastest pace since the 2007 recession began. 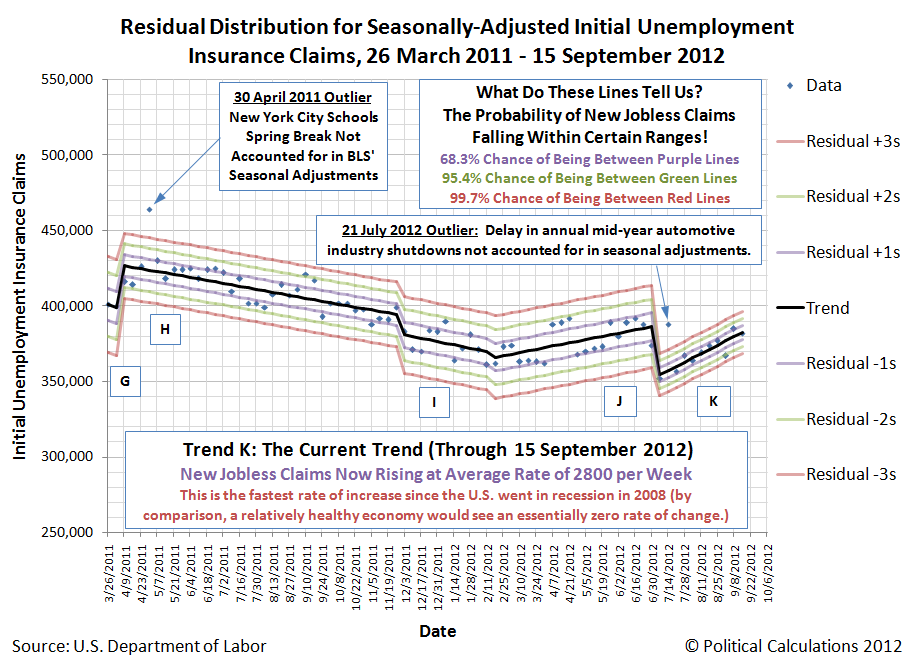 At present, the average rate of increase in the number of initial unemployment insurance benefit claims filed each week since the most recent trend began on 7 July 2012 has reached 2,800 per week. That figure is greater than the average rate of increase of 1,641 layoffs per week that was recorded as the U.S. entered into recession in December 2007. That figure held through 26 July 2008, when high oil and gasoline prices accelerated the recession into high gear, increasing the rate of new layoffs in the U.S. to 7,599 per week.

You can see how today's rate of increase in the rate of new jobless claims being filed compares with those observed in the 2007 recession in our chart showing the residual distribution of the major trends for layoffs since the beginning of 2006 (see here for a description of the primary trends indicated on our chart below): 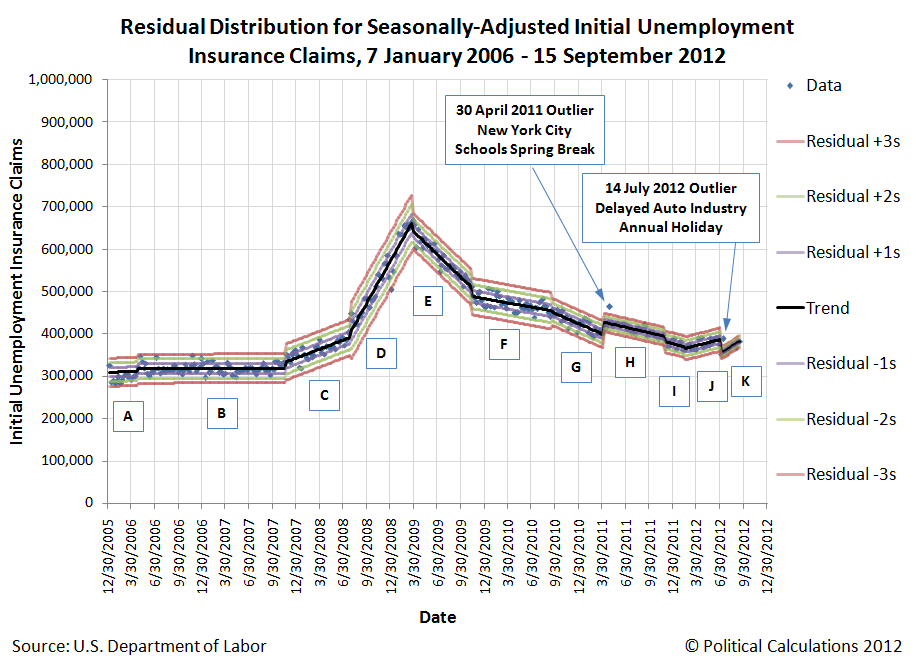 Unlike previous situations when the price of gasoline increased beyond the $3.50 per gallon threshold that we've observed seems to mark the level for "high" gasoline prices in the United States, it appears that employers did not react as suddenly to the onset of these prices as they have in the past.

Instead, following the sudden decrease in oil and gasoline prices in late June 2012, which marked the beginning of a sudden improvement in the U.S. economy, it appears that employers have ridden the boomlet that followed instead of suddenly reacting to the spike in gas prices to high levels as they have in the past, with the result being a relatively steady increase in the trend for new jobless claims, rather than a sudden upward adjustment.

Jim Hamilton describes why the employer response to high gas prices may be playing out so differently this time:

It's also interesting to look at how the response of consumer sentiment to gasoline prices has changed over time. The blue line in the graph below shows the same real gasoline price series plotted in Figure 1 above, except now drawn on a negative scale (shown on the right-hand axis); that is, the lower the blue line, the higher the price of gasoline. I plot it this way to highlight its relation to consumer sentiment, shown in black and labeled on the left-hand axis. When real gasoline prices first reached $3.50/gallon in 2005, consumer sentiment plunged sharply. When it happened again in 2006, the response was more modest, and on the third time in 2007, it didn't seem to faze consumers. It was only when gasoline prices went on from there to make new highs in 2008 that we saw sentiment plunge again.

By the second time gas threatened $4/gallon in the spring of 2011, the memory of 2008 had receded somewhat, and consumer sentiment fell sharply. It was much more muted when the same thing happened again just one year later. And right at the moment? Consumers seem to be shrugging it off. Nobody is surprised this time, having seen the same thing twice before over the last year and a half. Many of the adjustments people are making today were in fact set in motion 4 years ago.

There is quite a bit of empirical support for the claim that the second or third time oil prices move back near a previous high, the economic disruption is significantly less than the first time; see for example the evidence and literature reviewed in my 2003 Journal of Econometrics paper (ungated version here) and two recent surveys [1], [2].

And though the adjustment of employers to high gasoline prices in the U.S. would indeed appear to be different this time, with a steady rather than a sudden adjustment, the outcome is still the same: an increasing number of layoffs each week in the U.S.

We've been there and done that too!