How might a stock market technical analyst see the U.S. employment situation?

For us, that's a fun question because while we don't put much stock in technical analysis, we do consider it to be a very weak form of statistical analysis, so it's not as completely useless as astrology in divining data.

In practice, there's really not much more to technical analysis other than arbitrarily connecting the dots between the peaks and troughs of data points within a trend, combined with trying to divine patterns from the data, like the infamous "head and shoulders" pattern or the equally fun "dead cat bounce".

So to make it interesting, we've opted to apply it to the month-over-month change in the number of employed Americans counted by the Bureau of Labor Statistics in each month since the total employment level in the United States peaked in November 2007, just one month before the economy peaked before heading into recession, and specifically, we'll use it to try to answer the question: "how much of the jobs recovery can be attributed to policies implemented during President Bush's administration, and how much can be attributed to policies implemented during President Obama's reign in office?"

Here's what we find: 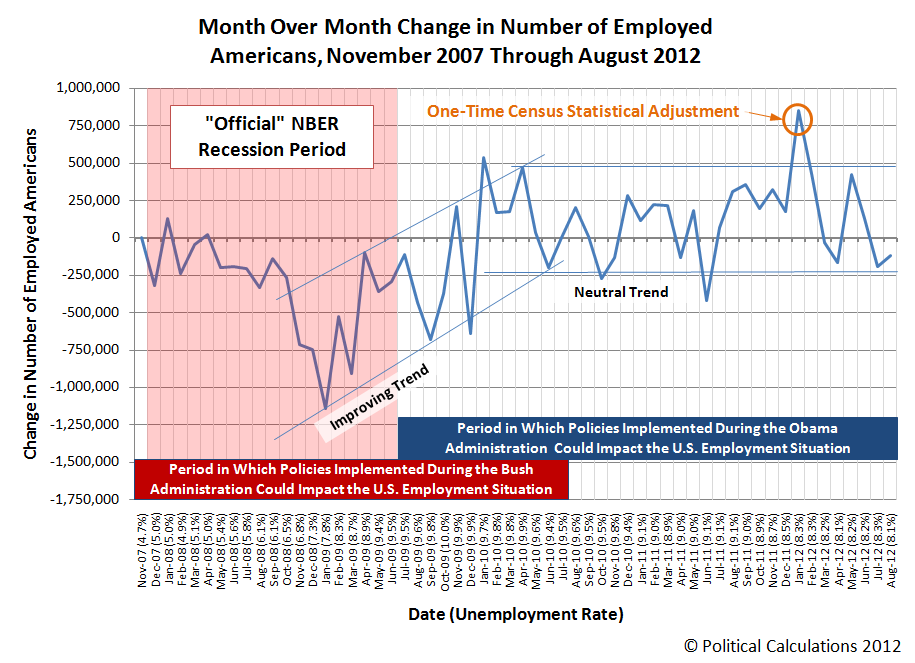 In the chart, we're applying Mark Thoma's effectiveness lag for determining when a particular policy to take effect after being put into place. According to Professor Thoma, once a fiscal or monetary policy has been put into place by the U.S. government or the Federal Reserve, it takes anywhere from 6 to 18 months for its effect to impact the U.S. economy.

What we find is that the recovery from the bottom of the recession in January 2009 through June 2009, the official end of the U.S. recession, can only be attributed to policies implemented during the Bush administration, as no policy implemented by the Obama administration could have had any meaningful effect upon the economy during these six months.

That trend of improvement then continued during much of the period of overlap between the times when policies implemented during either President Bush's or President Obama's tenures in office could have affected the monthly employment data. In fact, if this were a trend in a stock price, a technical analyst would have been screaming to go "all in" at the time because of its upward momentum!

However, we see that the trend of improvement established during President Bush's administration dies out toward the end of that overlap period, as the trend in the employment situation in the U.S. during the period where only policies implemented during President Obama's time in office would have a stronger and stronger effect.

Here, those policies had at first a negative impact, as they killed off the trend of improvement that had already taken root when President Obama came into office (here we note that the bottom for job loss during the recession had been postponed by a month by actions taken by President Bush, who sought to delay the largest layoffs in the automotive industry's history until after the Christmas holiday in 2008.) Since ending the trend of improvement for jobs however, they've had what might be described as a neutral effect, as the policies adopted by President Obama and the Federal Reserve since January 2009 have had little effect on the change in month-over-month employment other than to see it drift sideways in a very weak recovery - one incapable of restoring the jobs lost during the recession.

Perhaps the strong recovery they inherited explains why President Obama's economics team predicted that the U.S. unemployment rate would never exceed 8% in the four years from 2009 through 2012 - they were counting on that positive momentum to continue. Little did they know that the economic policies they adopted in the early days of President Obama's administration would prove to be so impotent, acting instead to kill off the recovery they actually inherited and leaving the nation's economy adrift in the economic doldrums in all the years since....