According to S&P's latest Monthly Dividend Action Report [Excel spreadsheet], the month of November 2012 was a record month that saw some 3,327 U.S. companies make some kind of declaration involving their dividends (that's not the record!) Here are the astounding numbers:

197 companies acted to increase their cash dividend in the 8th best month on record (since January 2004), and the most in any November on record. The all-time record for regular dividend increases announced in a single month is 246, which was set in February 2007.

228 companies acted to make a special cash dividend payment to their investors, the most ever. To put that number in context, the most announcements that companies would pay an extra dividend in an entire year was 233 in 2007. For the period of time for which we have data, the average number of extra dividends announced per month from January 1994 through October 2012 is 33. The previous record of 97 in one month was set in December 2010.

But this drive to pay out dividends in 2012 before the tax rates on them goes up in 2013 masks the deteriorating situation for many companies in the U.S. The number of companies announcing they would cut their cash dividend payments in the month of November 2012 rose to 27, up one from the previous month. 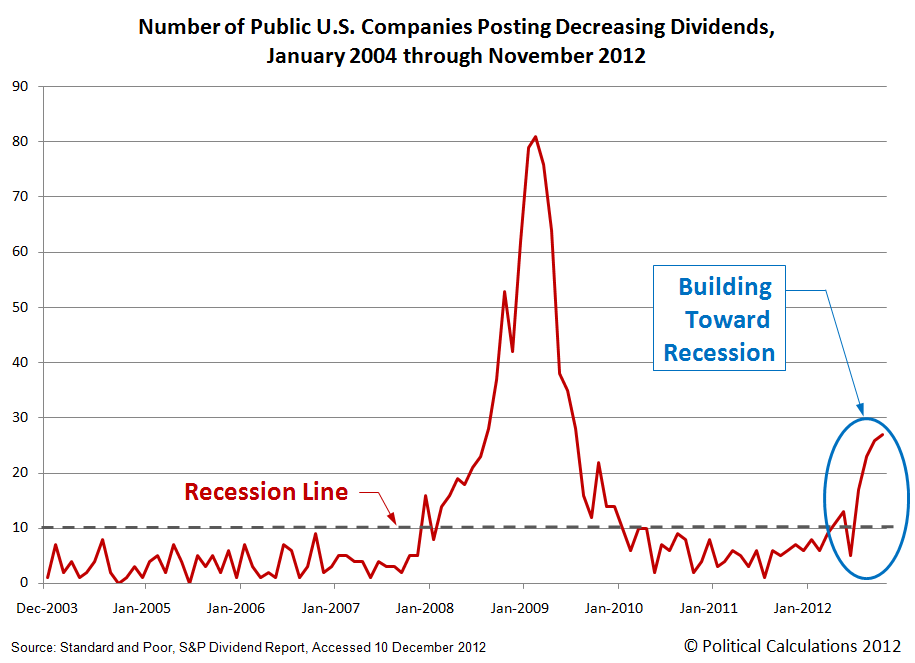 To put that increase in perspective, the average number of companies that act to decrease their cash dividends in a non-recession month is 4. The 54 dividend cuts that have been announced in just the last two months alone is more than would be expected in an entire average non-recession year.

In the chart above, it takes at least 10 companies announcing dividend cuts in a given month for the U.S. economy to be considered to be in recessionary territory. Through November, U.S. companies have announced 151 dividend cuts in 2012.