As we expected, economic growth in the third quarter of 2012 was revised upward twice before being finalized at the end of December 2012, rising from the originally reported annualized growth rate of 2.0% to 3.1% in the BEA's third (and final for now) estimate for that quarter.

We've updated our forecast for where GDP in the fourth quarter of 2012 with that finalized data: 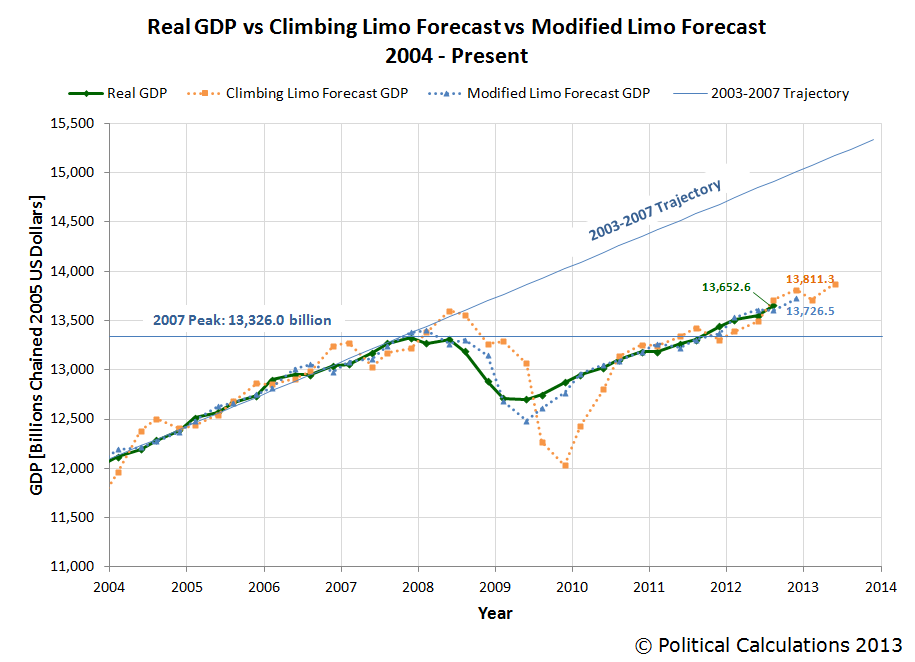 Our inertia-based forecast is overly optimistic and we anticipate that real GDP in 2012-Q4 will be recorded at a level below the $13,726.5 billion in terms of inflation-adjusted, chained 2005 U.S. dollars shown in the chart above, thanks to the combination of our expected major slowdown in economic growth for the quarter and the negative impact of Hurricane Sandy.

We'll close by repeating our comments from 29 October 2012:

In considering the overall strength of economic growth in the United States, our one and two quarter temperature gauges both indicate the economy is currently performing in the "cool" zone, indicating sluggish economic growth. Our less volatile two-quarter GDP growth rate temperature gauge indicates that the U.S. economy is actually trudging along at near-recessionary levels.

We anticipate that this condition will continue through the fourth quarter of 2012 and will worsen going into 2013.

You can't say you weren't warned months ago!