Political Calculations
Unexpectedly Intriguing!
January 31, 2013
The Upside of the Under 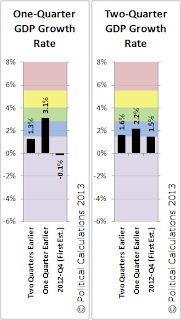 Taking the under turned out to have been the right call for us to make, as the first estimate for inflation-adjusted GDP came in at $13,647.6 billion in terms of the BEA's chained 2005 U.S. dollars, a difference of roughly 0.6% from the value we have projected will be recorded when the BEA finalizes its estimate of GDP for 2012Q4 at the end of March 2013.

We had given 68.2% odds that 2012-Q4's real GDP would fall between $13,583.8 billion and $13,869.2 billion, as the U.S. economy would appear to be continuing to skirt the edge of what we would describe as a microrecession. That condition becomes more apparent as we consider our two-quarter GDP growth rate temperature gauge, where the growth rate for 2012-Q4 falls just into the "cold" purple zone.

Since we base our GDP forecasts on the two-quarter growth rate of GDP, our forecast was largely immune to the large swings in the U.S. federal government's spending for defense that took place in the second half of 2012, where planned spending had been pulled ahead into the third quarter of 2012 to offset potential cuts in this spending as part of the so-called "fiscal cliff" at the end of 2012 and also to provide a boost to the U.S. economy ahead of the national elections on 6 November 2012. Defense-related spending was then sharply reduced in the fourth quarter of 2012, accounting for much of the lackluster GDP growth rate reported in the quarter.

The other major economic event of the quarter, Hurricane Sandy, would appear to have had a negative, but very small effect upon GDP in the fourth quarter of 2012.

Looking forward, using the first estimate of GDP for 2012-Q4, our "modified limo" forecasting technique anticipates that real GDP in the first quarter of 2013 will come in around $13,697.6 billion in terms of constant 2005 U.S. dollars. A positive move, so that's the upside of the under. 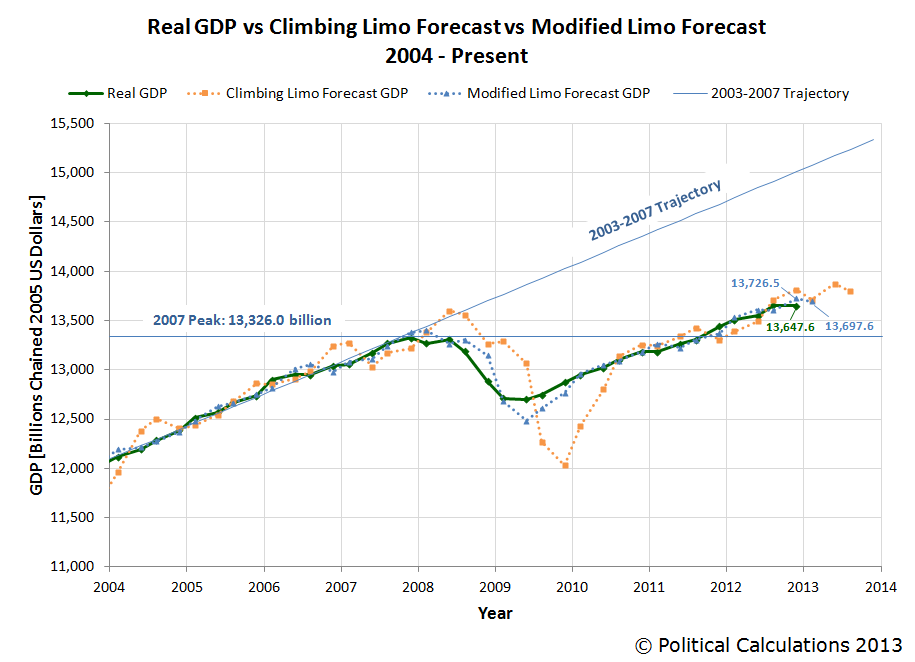 We will update our projections as the BEA adjusts its estimates of GDP for the fourth quarter of 2012. At present, we would expect the BEA's estimate of real GDP for 2012-Q4 to be revised slightly upward by the time of their third revision at the end of March 2013.

Jim Hamilton offers his analysis of the fourth quarter's GDP figures and points to other viewpoints.