Hauser's law is one of the more unique phenomenons in economics. Here, no matter what level the topmost income tax rates in the United States have been set, the amount of money that the U.S. federal government actually collects in taxes as a percentage share of GDP is fairly constant.

The reason why it works that way is because the people who earn the most money in the United States are able to avoid paying higher taxes by changing both how and when they might claim their income. 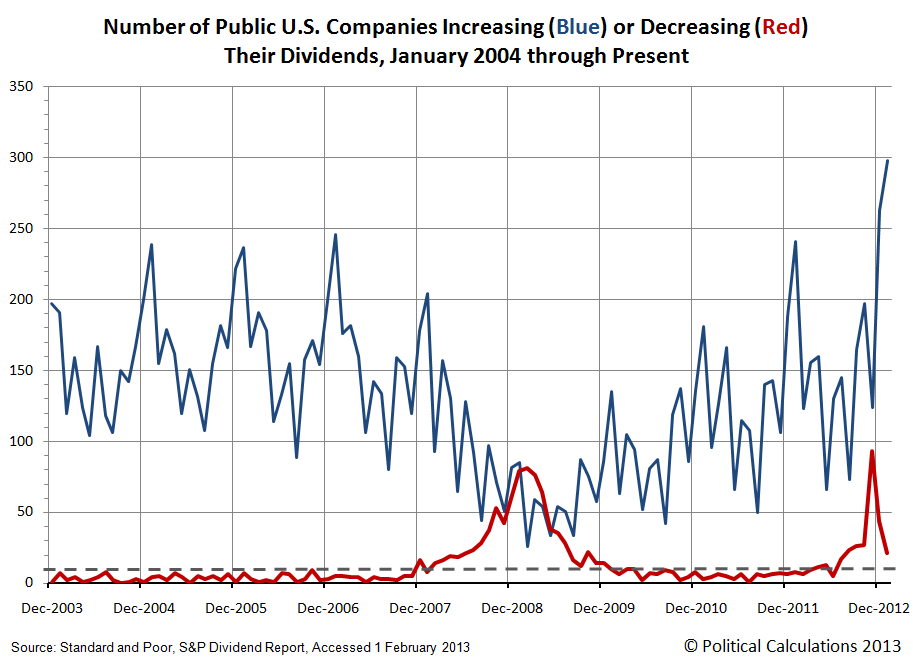 In normal circumstances, these new records would indicate the potential for booming economic growth in 2013. However, in this case, something else is going on, as these new records are being set right after the all-time record of 93 dividend cuts announced in a single month was just set in December 2012 at the same time the all-time record of 483 extra or special dividend payments in a single month was set.

The single thing driving all this unusual record-setting activity for U.S. dividend-paying companies is the so-called "fiscal cliff" crisis.

Here, America's highest income earners first sought to avoid the risk of having to pay nearly triple the level of taxes on their dividend income by pulling ahead dividend payments from 2013 to the fourth quarter of 2012 instead, where they would only be taxed at a 15% rate.

Since these companies primarily pulled the money to pay those dividends from the funds that were already being set aside to pay dividends in 2013, the desire to avoid the risk of being exposed to those higher taxes that would be taking effect in 2013 is responsible for the record number of special dividends and dividend cuts that took place in December 2012.

But then, President Obama and the U.S. Congress came to a deal that resolved the uncertainty for the risk of higher tax rates upon the nation's highest income earners. The tax rates were increased, but also locked in.

At the same time, the tax rate for both ordinary dividend and long-term capital gains from investments was set at 20%, which when combined with the "Obamacare" tax of 3.8% on such investment income for high income earners, bringing the combined federal tax rate on capital gains and dividends to 23.8%.

Important notes: These tax rates applied *after* companies have paid their federal corporate income taxes on the income used to pay dividends, which for most companies works out to be around 12% of their net income after deductions and exemptions, but on paper is 35% and can be as high as 39%. Also, the 3.8% "Obamacare" tax is most often identified as a "Medicare surtax on investment income", but none of the money collected from it is specifically reserved to pay for the U.S. Medicare program - all of it goes straight into the general fund of the U.S. Treasury instead.

With the tax rates for 2013 and beyond now set, at least at present, high income earning individuals at these publicly-traded companies have a choice - they can take their income in the form of either salary or dividends. As we can see in the sheer number of companies announcing dividend increases, they are choosing to take their personal income in the form of dividends instead of salary because they come out ahead in doing so.

And then, there's the little matter of President Obama's new desire to eliminate their access to the most common income tax deductions, which he had previously rejected any consideration of as part of the fiscal cliff tax deal in favor of imposing higher tax rates on high income earners.

Here, by taking a larger share of their incomes in the form of dividends instead of salary or wages, high income earners can sidestep the President's new drive to impose an even higher tax burden upon them by limiting their access to common tax deductions, thereby limiting the amount of any additional tax collections the federal government might have. Those kinds of deductions would only apply to so-called "ordinary" income.

And that, in a nutshell, is Hauser's Law in action, which we're seeing today in the form of an explosion of dividend increases, even as the number of dividend cuts being announced continues to be consistent with recessionary levels of economic growth.