Most inventions are meant to make life easier in some way. Even the Rube Goldberg-inspired contraption for removing the creme filling in Oreo cookie that we featured last week does that, in that it automates what might otherwise be a manual effort. It's a complicated way to do the intended task, but other than to load Oreos in and to unload the creme-filling free chocolate wafers out at the end is the only physical exertion required of the invention's user.

So what are we to make then of the following invention, which has been specifically developed to make a common physical task much more difficult to accomplish (HT: Core77): 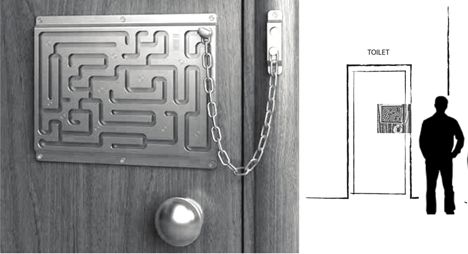 Here, the Labyrinth Security Door Chain makes the act of opening a restroom door much more complicated. But why?!

Believe it or not, the Labyrinth Security Door Chain solves a problem, and does in fact make life easier. Just not for the people who will be the most likely ones who will be directly challenged by the invention.

In this case, the people for whom this invention makes life easier are the owners and employees of establishments that serve lots of alcohol-based beverages. It helps them identify those customers who have had so much to drink that their ability to quickly solve the maze and enter the restroom has become significantly impaired, as has likely their ability to accomplish other tasks that might expose the establishment to liability, such as if they attempt to drive while under the influence of alcohol and get into an accident.

That information, in turn, allows the owners and staffs of alcohol-serving establishments to decide how to deal with the impaired customer, where options may range from changing the services being offered to them, say exchanging food service for drink items, to declining to continue serving them altogether and making arrangements for them to be driven home.

You have to admit - it's a simple and relatively inexpensive way to sort out which customers have a greater potential to expose the establishment to the risk of costly liability-related actions.