Political Calculations
Unexpectedly Intriguing!
03 April 2013
Taking the Over for GDP in 2013Q1

A little over three months ago, we predicted that GDP for the U.S. in the fourth quarter of 2012 would be finally recorded below a value of $13,726.5 billion in terms of constant 2005 U.S. dollars, which represents the midpoint of our target range. Now that the U.S. Bureau of Economic Analysis has released its third and for now final estimate of real GDP in 2012-Q4, it's time to find out just how far off target we were!

It seems that the midpoint for our target range overshot the actual figure of $13,665.4 billion 2005 U.S. dollars by just $61.1 billion, or rather, by 0.45%, which as it turns out, is well within our narrowest target range of $13,581.8 billion to $13,867.2 billion. The overshot in our predicted midpoint value indicates just how sluggishly the U.S. economy performed in 2012-Q4 compared to realistic expectations.

With the GDP data finalized for the time being, we can now project forward to anticipate what real growth the U.S. economy can expect in the first quarter of 2013: 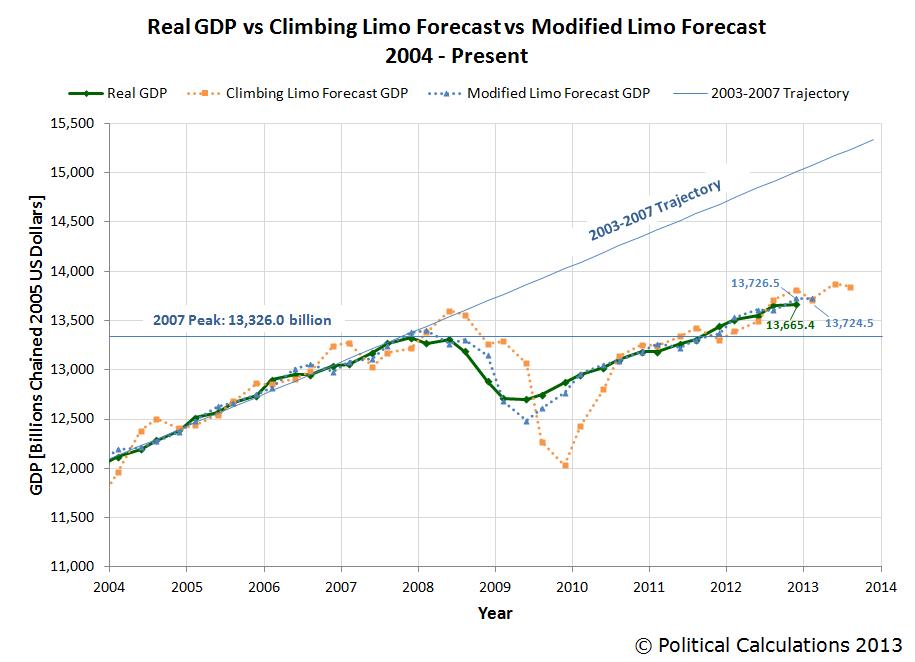 Using our modified-limo forecasting method, we would anticipate that real GDP in 2013-Q1 has the following odds of falling in the indicated ranges (all values are given in terms of constant 2005 U.S. dollars):

The midpoint of our target ranges is $13,724.5 billion. We note for reference that this would correspond to an annualized real growth rate of 1.7%. [We forecast GDP - not GDP growth rates, which are very susceptible to big swings with just small changes in actual GDP.]

We anticipate however that the resolution of the fiscal cliff tax crisis at the beginning of 2013 will have a net positive effect on the U.S. economy in the first quarter of 2013, more than offsetting the negative effects of the higher tax rates that took effect, as the event eliminated an immense source of uncertainty that President Obama had created with respect to the future of U.S. tax rates. With that being the case, we would take the over for GDP in 2013-Q1.