Today, we're following up our exploration of the fractal nature of the S&P 500 with an updated version of what we'll describe as the current micro-rally in the market, to which we've added some key points of reference: 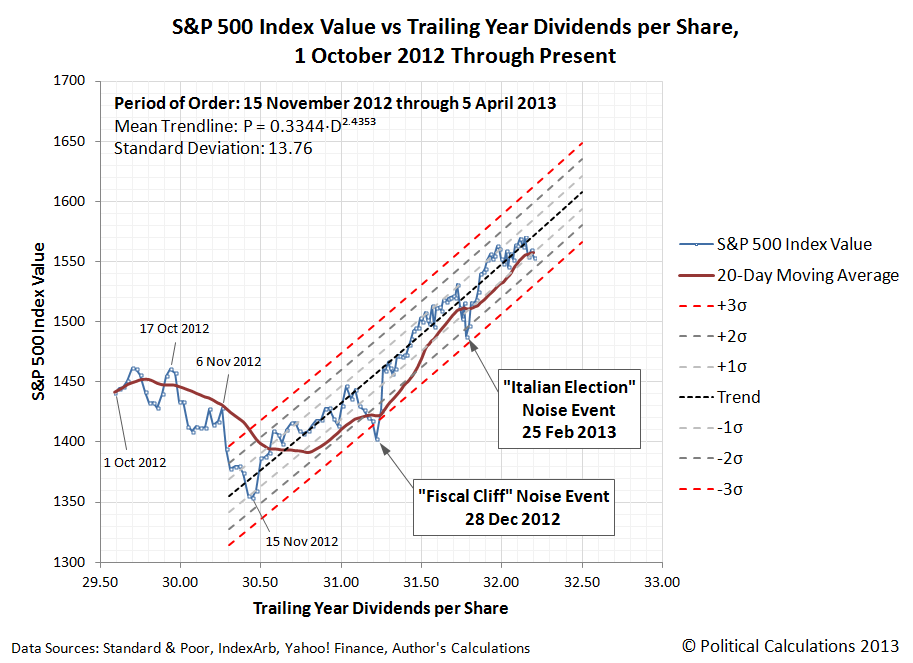 The "sell signal" provided by our power-law, regression and statistical analysis-based method would be found by taking a given trading day's projected value for trailing year dividends per share and plugging it into the power-law formula we've indicated on the chart, then subtracting that result by three times the standard deviation for the current trend that we've also indicated on the chart. If the S&P 500 closes at a value below that level, that would be your sell signal.

A slightly more conservative approach would be to use the 20-day moving average of the S&P 500 instead of the closing daily index value as the price that would trigger an investor's decision to sell.

We do realize that this looks a bit like technical analysis, which in our view, is really a very weak form of statistical analysis. And since we mentioned the fractal properties that stock prices have, we can see where some might think that we're keying into Elliot wave theory.

In reality, we're way beyond that. If you were really trying to pigeonhole us, you might think what we're doing is a blend of behavioral finance and econophysics, with a good dose of chaos and complexity theory thrown in for good measure.

If you want to know more, well, it all started when we had the idea to put the sun in the center of our model of how stock prices work. The rest has been developed live, in real time, ever since....