The U.S. Treasury Department has revised its estimates of the foreign ownership through the end of Fiscal Year 2012, which means that we can now finalize our picture of just who the major holders of the 16.027 trillion dollars of the outstanding U.S. government debt issued through 30 September 2012 are: 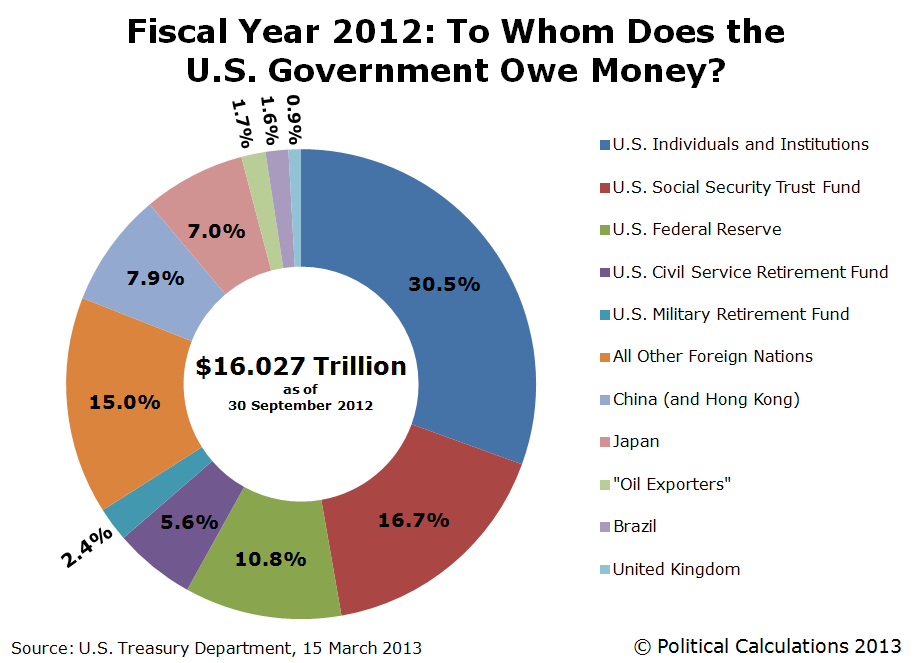 Overall, U.S. entities own 66% of all debt issued by the U.S. federal government. Ranking the major U.S. entities from high to low, we find that:

Meanwhile, foreign entities own 34% of all U.S. government-issued debt, with the following nations' individuals and institutions representing the five biggest holders of that debt, again ranked from the highest to lowest share of ownership:

All other nations hold approximately 15% of the U.S. outstanding national debt.

The Federal Reserve's Growing Share of the U.S. National Debt

The Fed has also boosted its holdings of other federal agency debt securities from $48 billion on 18 March 2009 to a peak value of $169 billion on 10 March 2010, which has slowly declined to $83 billion as of 26 September 2012. All told, the Federal Reserve held an additional $1.21 trillion of the U.S. national debt compared to what it did before it began its quantitative easing programs.

This analysis does not reflect the results of the Fed's most recent round of quantitative easing, which it first announced on 13 September 2012, then later expanded on 12 December 2012.

Through 29 March 2013, the halfway point of the U.S. government's 2013 fiscal year, the total public debt outstanding of the United States has grown to $16.771 trillion - an increase of more than $744 billion in just six months time.

Meanwhile, on 3 April 2013, President Obama pledged to donate an amount equal to 5% of his $33,333 per month salary as President of the United States of America to the U.S. Treasury, which only accepts such voluntary payments to "help reduce the public debt". Nearly a year earlier, on 10 April 2012, the White House's official spokesman Jay Carney described such a gesture as a "gimmick" when proposed by opponents of the President's ongoing calls for higher taxes, which the President later succeeded in obtaining on 3 January 2013.