Political Calculations
Unexpectedly Intriguing!
May 15, 2013
Clarity and the S&P 500

And then, suddenly, the future for the S&P 500 snapped into clear focus: 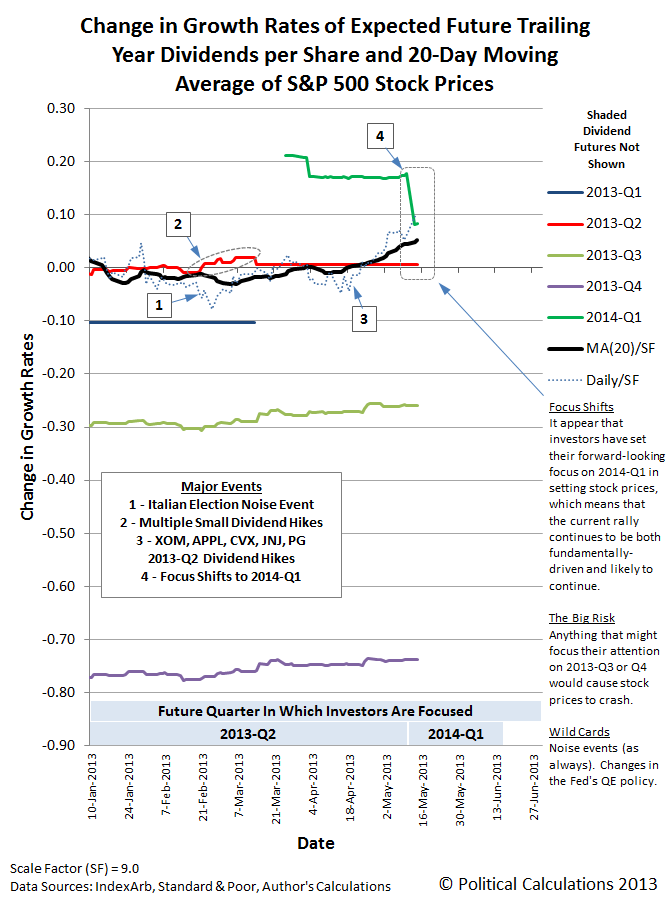 It would appear that investors have shifted their forward-looking focus to 2014-Q1 in setting the pace of change for U.S. stock prices. Following the period after the fiscal cliff reaction of 15 November through 20 December 2012, they had been focused mainly on 2013-Q2.

However, anything that might shift the focus of investors to the less distant future quarters of 2013-Q3 or Q4 will send stock prices crashing.

Other factors that might cause the acceleration rate of stock prices to deviate from the 2014-Q1's expected trailing year dividends per share are the Fed's quantitative easing (QE) policies, where the Fed has recently indicated it could amp up its purchases of U.S. Treasuries or could begin tapering them off altogether. Beyond that, random noise events could temporarily send stock prices off track.

From our perspective, perhaps the most surprising thing about the rally in the stock market since 15 November 2012 is that it has been extremely driven by underlying fundamentals. The one thing that ended the recent uncertainty we had in which alternate future investors would select to focus their forward-looking attention upon was the sudden decline in the 2014-Q1's expected dividends per share, which dropped from $9.37 per share to $9.11 per share on Monday, 13 May 2013 - coinciding with the end of the period for establishing the shareholders of record for the biggest two stocks in the S&P 500, Apple and Exxon Mobil.

That change brought the level of the change for the growth rate of expected trailing year dividends per share into easy reach for today's stock prices. With that being the case, they are more likely to be able to hold that level outside changes in the Fed's QE policies, which if the Fed is targeting stock prices as it has in the past, means that they can get away with doing less as there is a fundamental reason for stock prices to continue growing.