Believe it or not, May 2013 was a good month for jobs in the United States. Unless you're an American teen, where you haven't seen any meaningful improvement in the employment situation since October 2009, or a young adult, where your numbers in the U.S. workforce just fell by 157,000 from their April 2013 level. 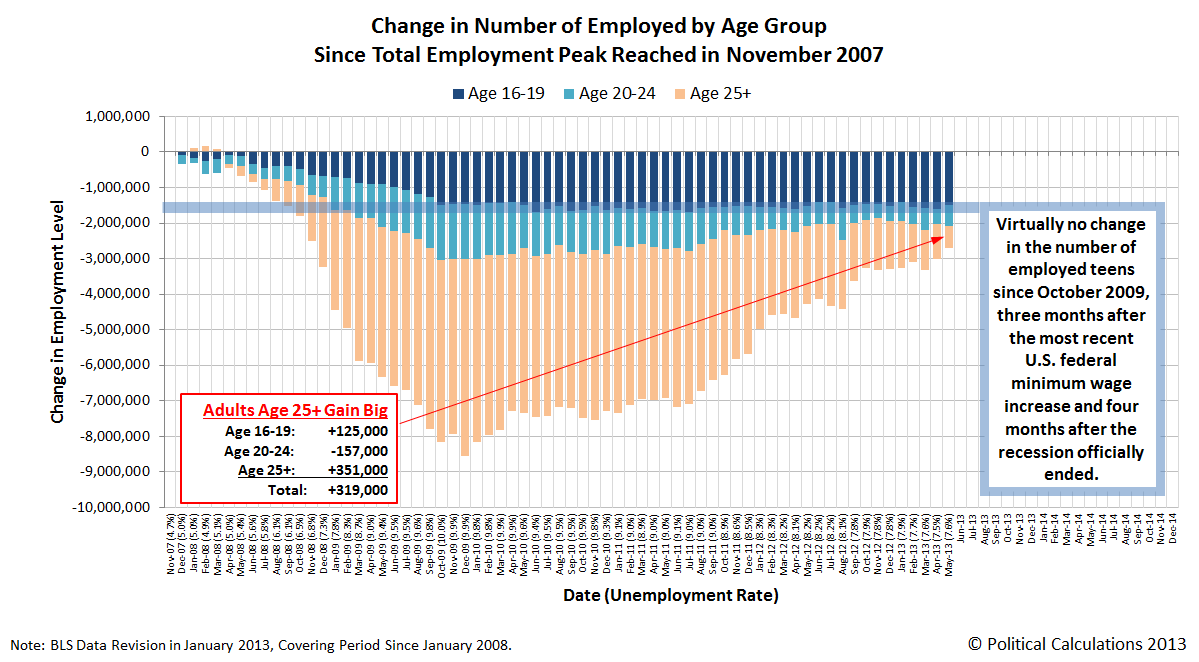 But, for Americans Age 25 or older, May 2013 was all good! In fact, for American grownups in the U.S. civilian labor force, it would seem to take just 626,000 more jobs to full recover to the level of employment last seen for this age group in November 2007, just ahead of the Great Recession!

Then again, that includes a lot of U.S. baby boomers, whose numbers are now considerably inflating the ranks of those over Age 65. What about working-age American adults?

Looking just at changes in the Age 25-64 labor force, which we can do by taking the BLS' non-seasonally-adjusted data from the Current Population Survey for the Age 25+ population and subtracting the equivalent data for the Age 65+ population from it, we find that in the six and a half years from November 2007 to May 2013:

The employment-to-population ratio for American grownups Age 25-64 has therefore fallen from 76.5% to 72.8% in the six and a half years since U.S. total employment peaked in November 2007, even though the population for this segment of working-age Americans has increased by roughly 2.8%.

Likewise, the labor force participation rate for Age 25-64 Americans has fallen from 79.4% to 77.3% during these years, which indicates that about 2% of working-age American adults have become discouraged with the ongoing employment situation in the U.S. and have permanently exited the U.S. work force. Meanwhile, the unemployment rate for working age American grownups who have remained in the civilian labor force has increased from 3.5% to 5.9%.

We find then that the real reason that the Age 25+ population would appear to now be so close to recovering their pre-recession employment number is because about 2.1 million U.S. baby boomers are delaying their retirement as they have retained their jobs into and past Age 65. There's still a very long way to go for a full economic recovery in the U.S.