Following our previous look at trade between the United States and China, we believe we've sorted out much of what happened with China's exports to the U.S. in March 2013.

Here, it appears that much of the fall in the year-over-year growth rate of China's exports that we observed in March 2013 was really tied to the timing of the Chinese New Year/Spring Festival holiday, which effectively ran during the week from 9 February 2013 through 15 February 2013. The late timing of this holiday in 2013 then impacted the volume of cargo from China reaching the U.S.' west coast ports in March because of the 1-1/2 to 3 week long transit time to reach them.

This factor also explains why the year-over-year growth rate for China's exports to the U.S. in February 2013 was so high. The earlier timing of the Chinese New Year/Spring Festival holiday in 2012 placed the holiday-related trough for U.S. imports from China in February 2012.

We consider that level to be near-recessionary. Let's next look at the year-over-year trade growth rate data between the U.S. and China for the month of April 2013, which is not impacted by the timing of the Chinese New Year/Spring Festival holiday. 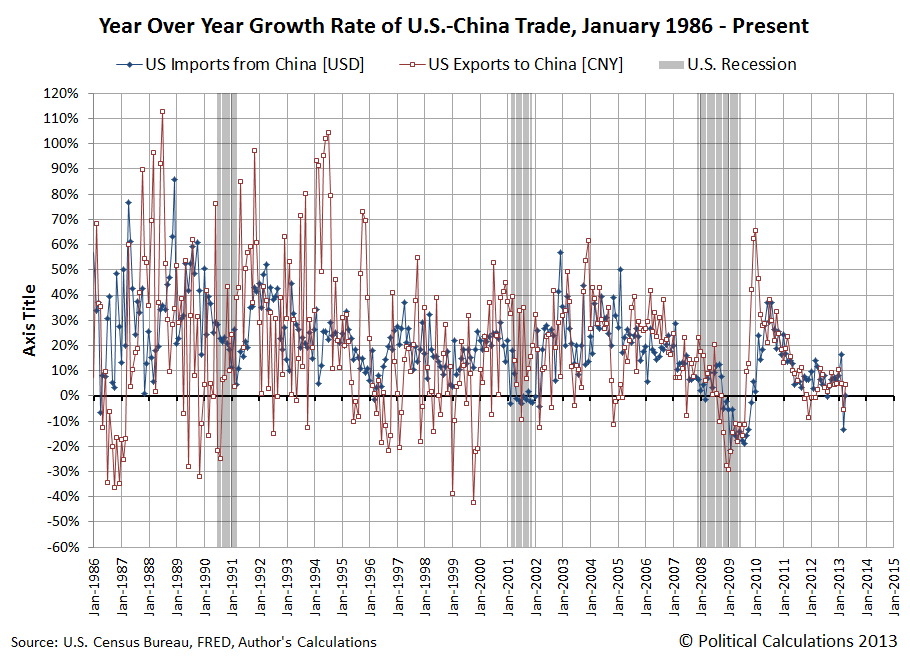 Here, we see that the year-over-year growth rate of the U.S.' exports to China of 4.3% have bounced back to be near their February 2013 level, as there are no historic anomalies in the data (as there were in March 2012). This rate of increase is consistent with a Chinese economy that is growing slowly.

More significantly however, we find that the year-over-year rate of growth of the U.S.' imports from China in April 2013 is 0.3% - less than it was in the combined February-March 2013 period.

We therefore find that U.S. economy is continuing to perform very sluggishly, as it slowly decelerated in April 2013 from an already low level. A more robustly growing economy would be drawing in increasingly higher levels of goods over time.