Is President Obama planning to default on the U.S. national debt?

We had some interesting traffic on our site yesterday, as an individual in the Executive Office of the White House took an unusually strong interest in our Timeline of Major Events Driving the Risk of U.S. Default, which documents much of the last debt ceiling crisis that culminated in the summer of 2011. 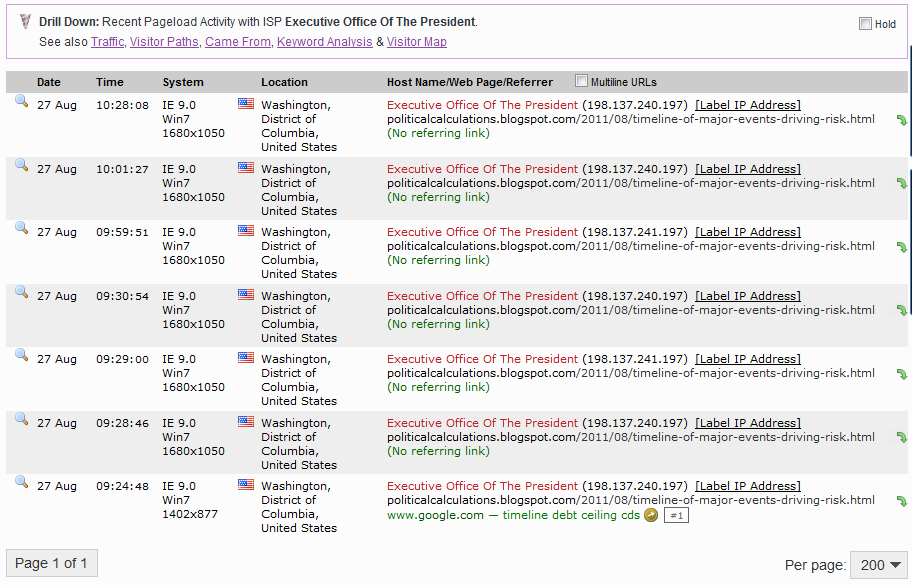 We don't think they were very happy with our independent analysis of the White House's role in increasing the risk of a U.S. government default during that period of time, although they would seem to have appreciated it enough where they used a combination of terms that are unique to our analysis in a Google search to specifically track it down and to refamiliarize themselves with it.

More practically however, we had used Credit Default Swaps for U.S. Treasuries as a tool to measure the relative risk of a U.S. federal government default upon its national debt payments. Unfortunately, the same tool will be of little value in considering the current situation where the U.S. is once again approaching its debt ceiling. Reuters explains:

LONDON, July 8 (IFR) - Credit default swaps are no longer viewed as a reliable indicator of sovereign risk, traders say, as an EU ban on speculative activity has successfully eviscerated an instrument that European policymakers once blamed for exacerbating the eurozone crisis.

Portugal's political establishment was rocked by multiple ministerial resignations last week, causing the country's CDS to soar by more than 20% in a day to 506bp on Wednesday, its widest level in seven months, while the yield on its 10-year government bond almost reached 7.5%.

But in stark contrast to previous examples of sovereign stress, traders professed to be largely ignoring CDS spreads, as a huge drop off in volumes and liquidity has undermined the price discovery value of the product.

"People pricing sovereign risk now look at the bonds, so why would you look at the CDS if bonds are where the information lies? Back in the day it was the other way around, with CDS levels being the crucial signal - it's a fundamental change," said Paul McNamara, investment director at GAM.

To translate, because they were unhappy that the market had a tool that clearly communicated the risk of a sovereign government defaulting on its debt payments, the people who run the European Union chose to scapegoat the trading of credit default swaps for its problems and banned them.

It's kind of like how the people who are successful in shorting stocks are blamed for the problems of the failing companies whose stock prices are falling because of bad business decisions made by the insiders running the companies. Only here, the insiders of the failing entities have the ability to shut down that kind of trading.

The E.U. ban directly affects U.S. credit default swaps because it eliminates much of the source of liquidity and volume needed to make its price a good signal of the level of perceived risk of default.

And so, we go into the U.S. federal government's next debt ceiling crisis with a broken tool. We could perhaps use the yields of the 10-Year U.S. Treasury as a substitute, but that has been rising ever since May 1, as the market has been progressively pricing in the end of the Federal Reserve's current round of quantitative easing (QE). 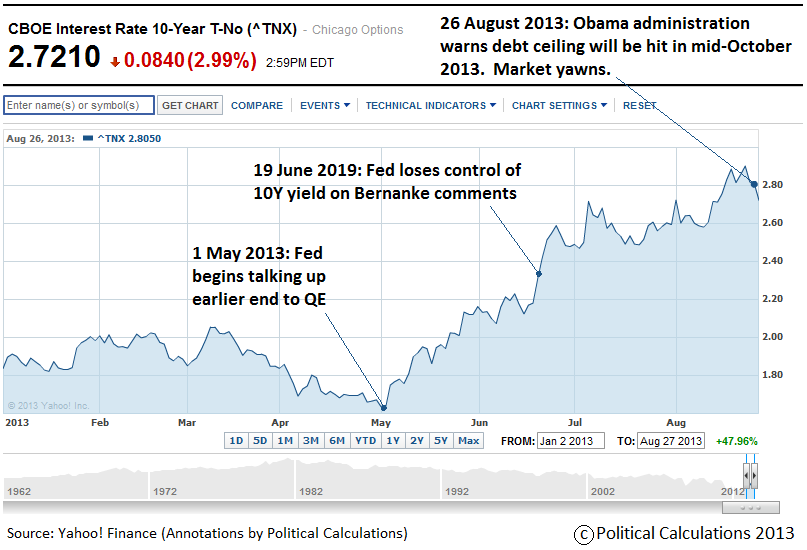 In fact, we would say that virtually all of the increase in the yield of the 10-Year U.S. Treasury since 1 May 2013 may be attributed to speculation associated with when the Fed will begin to act to end its QE programs. Although the Obama administration is targeting mid-October in its plans for when the U.S. Treasury will reach the nation's debt ceiling, the market pretty much shrugged off the news as Treasury yields fell, which indicates that they aren't placing very much stock in the administration's pronouncements.

It would seem then that President Obama will need to behave much more irresponsibly in taking actions that will boost Treasury yields if he hopes to send the market a signal that the U.S. will default on its debt at his direction.