That's because of the deal struck between President Obama and the U.S. Congress, which allowed the national debt to increase while both the House of Representatives and the Senate passed budget proposals, which was a real accomplishment for the U.S. Senate, since that body hadn't fulfilled its Constitutional responsibilities for passing any budget proposal for years.

But after that, the window for further debt increases closed, with the total public debt outstanding for the U.S. since then frozen within a few billion of $16.738 trillion.

If you would, please take a moment to think about how casually we're describing those very, very big numbers....

That $16.738 trillion is approximately the current level of the debt ceiling for the U.S. federal government. Since reaching that level in May 2013, the U.S. Treasury has been employing "extraordinary" measures to ensure that the official national debt of the U.S. does not exceed that level, which include such steps as delaying borrowing money to fund the pensions of federal government bureaucrats.

Meanwhile, the Federal Reserve has maintained its quantitative easing programs, where it has been acquiring an average of $85 billion per month in U.S. Treasuries (UST) and Mortgage-Backed Securities (MBS).

Both these factors account for the big changes that we observe have taken place since the end of the U.S. federal government's 2012 fiscal year on 30 September 2012. 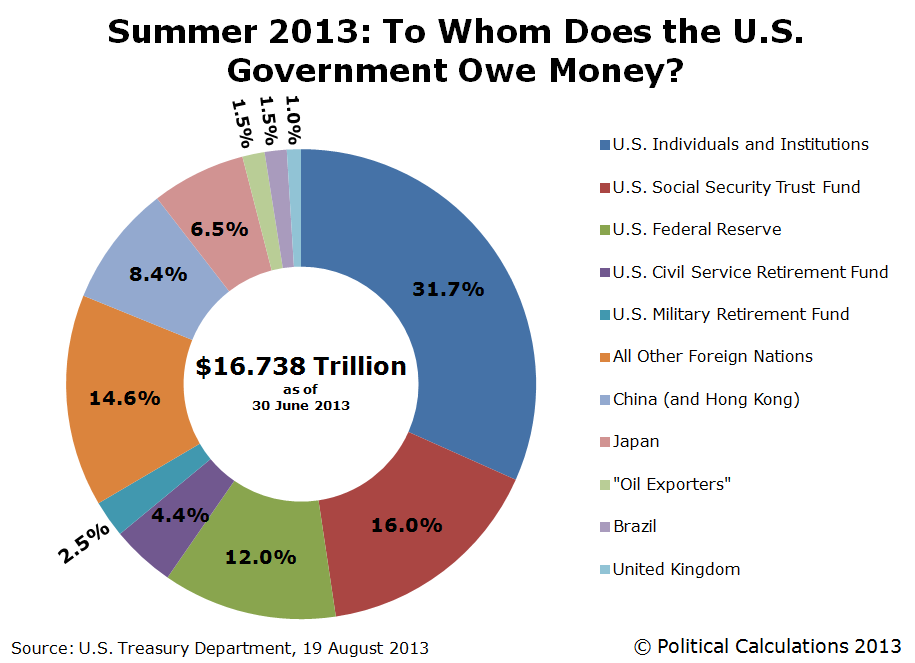 Since that time, the Federal Reserve's share of the total public debt outstanding of the United States has increased from 10.8% to 12.0%, as the share held in the U.S. Civil Service Retirement Trust Fund has declined from 5.6% to 4.4%.

With the Federal Reserve sustaining its QE bond-buying program, we also observe that the relative share of the national debt by foreign entities has declined. This is a result of the Fed's QE policy "crowding out" these other lenders from the market for U.S. government-issued debt securities.