As we expected, with the Federal Reserve's tapering of its current QE programs now a near certainty, investors have begun shifting their attention to a more distant future quarter.

More specifically, they're shifting their attention away from 2013-Q3, the quarter that investors have associated with the Fed acting to begin reducing the pace of its acquisitions of U.S. Treasuries and Mortgage-Backed Securities, back toward 2014-Q1. 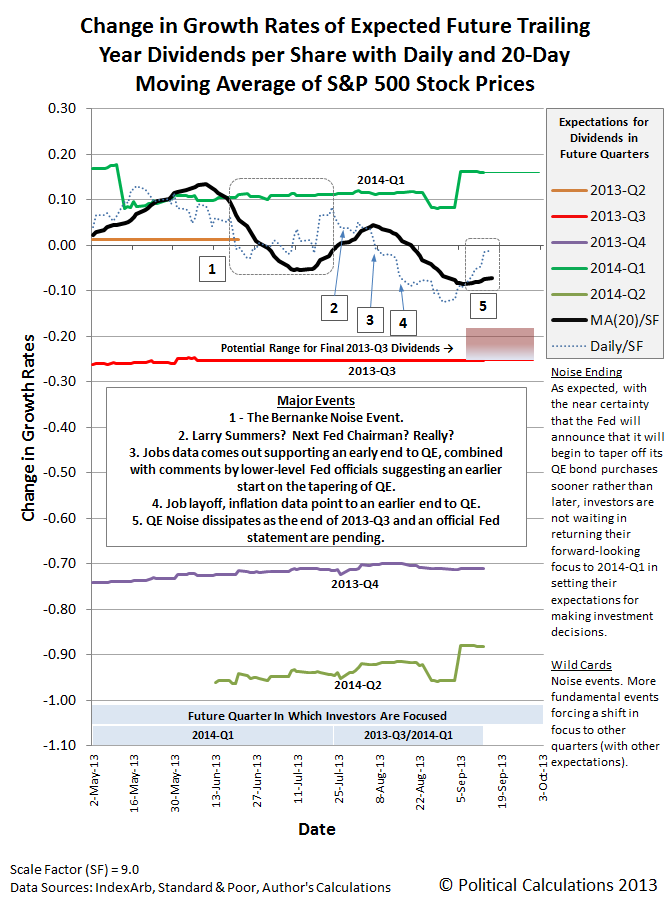 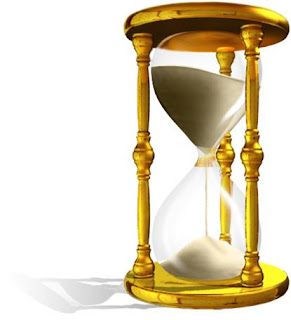 There's more to this transition than just the locking-in of the expectation that the Fed will taper its QE programs sooner. We're also running out of future for investors to focus upon in 2013-Q3 as well!

By that, we mean that for all practical purposes, the future left to run in 2013-Q3 will run out this upcoming Friday, 20 September 2013, as the dividend futures contracts for 2013-Q3 are set to expire on that date. Since last week, there is very little benefit left for investors to continue shaping any portion of their investment decisions based upon the expectations related to 2013-Q3.

As a result, instead of being 74% of the way from 2014-Q1 (0%) to 2013-Q3 (100%) on our chart, daily stock prices (the dashed blue line) have risen to be just 49% of that distance. In the absence of any major new noise events, we would anticipate that stock prices will continue to generally rise as investors fully refocus their forward-looking attention on this quarter.

There is one wild card we haven't mentioned on our chart above. With the expiration of the dividend futures contract for 2013-Q3, we'll soon have that data replaced by that for the futures contract of 2014-Q3. It's possible that investors might focus upon that quarter, but we believe unlikely at this time, as it would make more sense for investors to focus on the nearer term that would coincide with the period of time in which most companies would implement any major changes in their dividend policies related to changes in their future business outlook.

Update 16 September 2013, 9:10 AM EDT: As a side note, we wrote this analysis on Friday, 13 September 2013, long before the news of Larry Summers withdrawal from consideration became news on the afternoon of Sunday, 15 September 2013. Shortly after the news came out, we posted our thoughts on how the market would react to Summers' withdrawal on Monday over at Barry Ritholtz' blog, before the stock price futures for 16 September 2013 came out - it would seem all is going as we expected....