Last week, the stock market gave 52% odds that the Fed would commit to tapering off its purchases of U.S. government-issued securities by the end of the third quarter of 2013. In just a week's time, the probability of that happening have increased to be somewhere between 62% and 78%.

We know that's the case because that's how much the gap between the expectations for dividends associated with the first quarter of 2014, the point in the future where investors had fully fixed their forward-looking focus as recently as mid-June 2013, and the expectations associated with the third quarter of 2013, which is where investors expecting an earlier end to the Fed's QE program would focus, has closed. 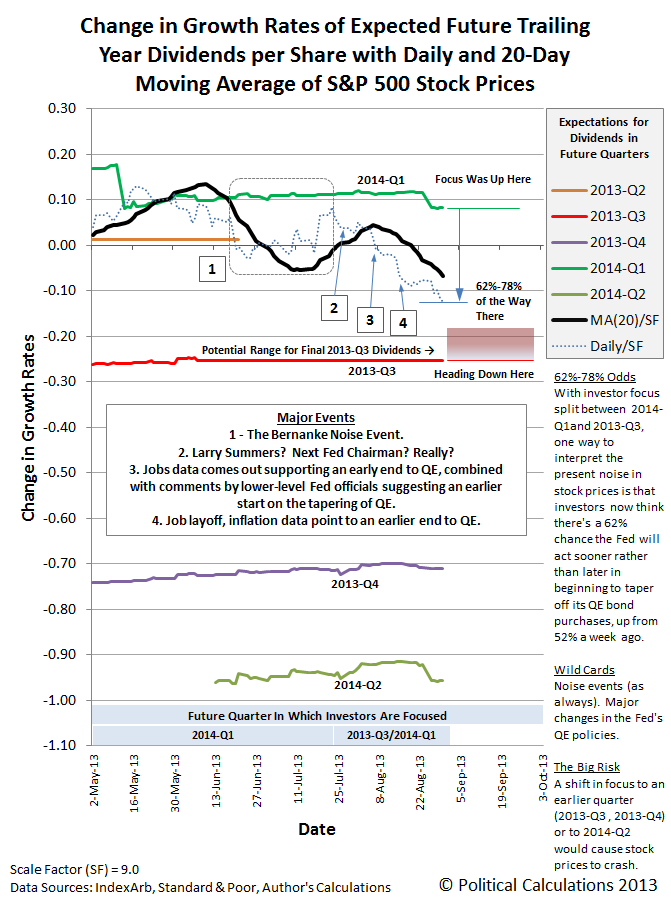 The reason we're now indicating a range of potential odds for this likelihood is due to the different information being communicated by our primary sources of data for the dividends that will be paid out in future quarters.

One of those sources effectively stopped transmitting data related to the full amount of dividends that would be paid out during 2013-Q3 after the futures contracts for the dividends of 2013-Q2 were closed out, which happened back on the third Friday of June 2013. At that time, those futures indicated that S&P 500 companies would collectively pay the equivalent of $8.64 per share in cash dividends during the third quarter of 2013.

Our other source of data continued transmitting however, and now indicates that the effective cash dividend per share that will be paid out by S&P 500 companies will be $8.81.

The difference between these two values accounts for the range of probabilities associated with our real-life Schrödinger's Cat experiment with the stock market, which we've indicated by the range on our chart (the upper limit of the range coincides with 2013-Q3 dividends at $8.81 per share, the lower limit coincides with the $8.64 per share value.)

Normally, we wouldn't care because the small difference between the values isn't much different from the levels of noise we typically see in the data, however since we're using the change of the rate of growth of stock prices as the measure of the relative probability that investors are assigning to a particular market-influencing event, we're endeavoring to quantify it as best as possible. Based on what we observe in the trends for other future quarters in the chart, we'd say the odds are much closer to 78% than they are to 62%. 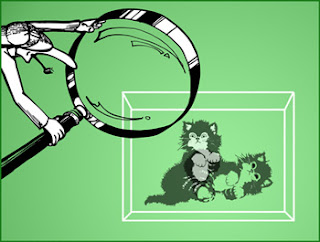 Or in more colorful terms, where the potential of the Fed's earlier end to its current QE program is concerned, investors are increasingly coming to believe that Schrödinger's Cat is over three-quarters dead.

That's a good thing given the math for how stock prices work. The lower probability would coincide with the S&P 500 in September falling off to a value of around 1500 within the next few weeks. Meanwhile, the higher value would be more favorable to investors, since it coincides with the S&P 500 falling to around 1550 during that time.

That assumes that the Fed's pending announcement of the timing it will set for the tapering of its QE program will remain the dominant focus for investors during this time. News, or rather, new noise events, would cause stock prices to deviate from the values set by these rational expectations based on basic market fundamentals.

The potentially very good news in all this is that the focus at this level will not remain there for long, because the futures contracts for dividends related to the third quarter of 2013 will expire on the third Friday of September. And since the first quarter of 2014 is still in the future, investors will therefore have the option of returning their focus to the positive level associated with this point in time after the Fed's announcement of its plans.

The potentially very bad news however is that the alternative future quarters that investors could use to rationally set their forward-looking expectations are considerably more negative in outlook than the quantum level for expectations associated with the third quarter of 2013.

So, let's hope that the Fed provides a good reason for investors to reset their focus on 2014-Q1 after they officially commit to doing whatever it is they will do.

No matter what however, investors will not dwell over the fate of Schrödinger's Cat for very long....