Political Calculations
Unexpectedly Intriguing!
September 10, 2013
The Evolution of Investor Expectations for the Future of QE

What we're about to show you is only possible because of the work we've done to describe how stock prices change in response to the changes in the fundamental factor that drives them: expectations of the amount of cash dividends per share that will be paid out to investors in the future. Because we are able to isolate the effect of this fundamental driver on stock prices, we can determine the extent to which they respond to other, non-fundamental factors.

Typically, we would describe these non-fundamental factors as "noise", because they contribute to the apparently random variation of stock prices over time, mainly as investors react and sometimes overreact to new information. Most often, there are multiple sources of noise that affect stock prices, which makes the stock market a pretty noisy place, even in typical circumstances.

But sometimes, there is a single source of noise that is so "loud" that it seriously skews stock prices away from the levels that they would otherwise be if we went just by their fundamental drivers. The expectation of what the Fed will do with its Quantitative Easing (QE) programs and when it will do it is just such a loud source of noise.

The reason why that's the case is because the Fed's latest QE effort is fully responsible for virtually all of the nation's economic growth since the third quarter of 2012. Since the Fed's latest QE program was first announced in September 2012, the Fed has effectively put the tab for overcoming all the fiscal drag from minor government spending cuts and major tax hikes and all of the positive economic growth in the nation's GDP above its 2013-Q3 level on its balance sheet through its QE programs.

Clearly then, what happens with the Fed's QE programs is of great interest to investors, because of their effect upon investments. It really shouldn't be any surprise that they have reacted whenever there has been any inkling of a potential change in what the Fed will do with those programs.

Our chart below shows how they have reacted to all the news and noise related to those potential changes, using the expectations for the future dividends per share for the S&P 500 that will be paid by the end of 2013-Q3 and 2014-Q1 as the fundamental benchmarks against which we can measure the changing expectations related to the future for the Fed's QE program. 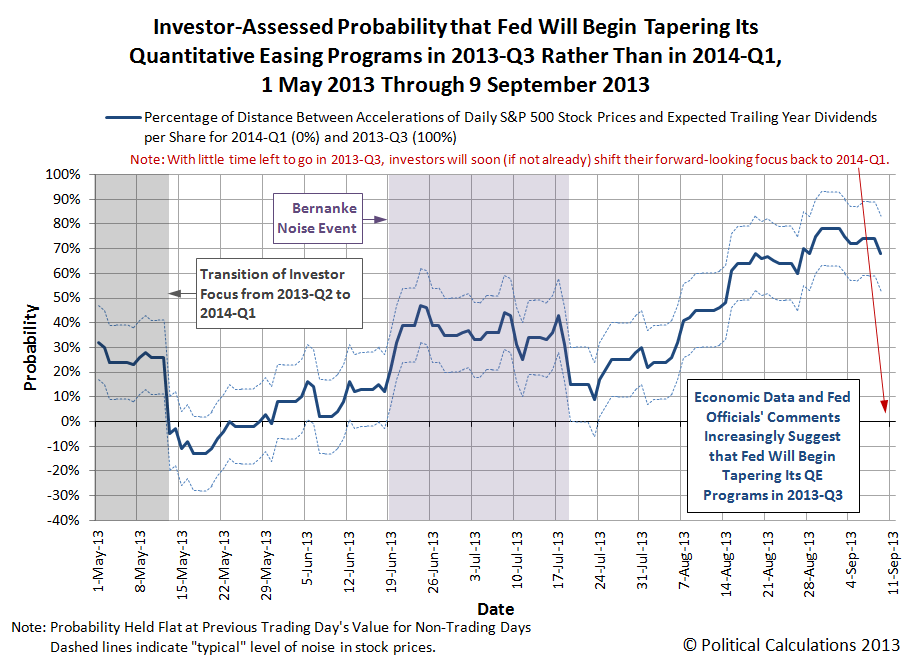 In the chart above, a 0% reading indicates that investors are fully focused on 2014-Q1 in setting their expectations for buying and selling stocks, which also coincides with the expectation that the Fed would not change their QE program until 2014. By contrast, a 100% reading would be an indication that investors have fully shifted their attention to 2013-Q3, which corresponds to the expectation that the Fed will begin drawing down its QE program in that quarter.

Generally speaking, an increase in the probability of an early tapering for QE shown in the chart above coincides with a decrease in stock prices.

Now let's match up the action on the chart with history. The word that the Fed might begin scaling back the purchases of the mortgage-backed securities (MBS) and U.S. Treasuries that make up the core of its QE programs first came in early May 2013. At the time, stock market investors were transitioning their forward-looking focus for the dividends per share they expect to earn from the second quarter of 2013 to the first quarter of 2014, so that news was not paid much attention as they shifted their focus to a new set of expectations for the future in deciding how much of which stocks to buy or sell.

So they didn't put much stock into the possibility that the Fed might trim back its MBS and Treasury buys before the end of 2013 at the time. It was a trivial consideration as investors were focusing in on a new set of expectations for the future where their investments were concerned, and any effect that it might have had on stock prices was lost in the typical level of noise in the market.

By mid-May, the forward-looking focus of investors was squarely set on the expectations associated with the first quarter of 2014. The economic situation in the U.S. was such that it seemed unlikely that the Fed would consider changing its QE programs until that point at the earliest, so stock prices behaved accordingly.

The stock market got a wake up call at 2:42 PM EDT on 19 June 2013. That was nearly the exact moment when Federal Reserve Chairman Ben Bernanke put his voice behind the idea that the Fed would act to reduce its QE efforts before the end of the year if the economy improved as the Fed expected, and perhaps as early as before the end of the third quarter of 2013. Stock prices quickly plunged as a number of investors began making buy and sell decisions based upon the expectations associated with the third quarter of 2013. 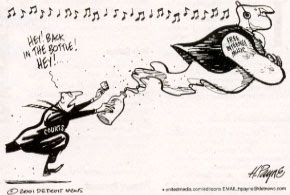 The Fed wasn't ready for that expectation to take hold, since the data for the nation's economic performance wasn't good enough to support that conclusion at that time, so the Fed spend the next month doing everything in its power to put the QE-tapering genie back in its bottle. And they succeeded, which we see in the probability level falling back to the near-zero level.

But then, the nation's economic data began indicating improvement, and combined with the losses the Fed is taking on its balance sheet from buying into the MBS and Treasury markets at and near their respective tops, began providing Fed officials with the incentive to push for an earlier end to QE, even though the nation's economic situation is still such that the change in policy may be premature and heaven forbid that the Fed ever realize a loss on its own books....

Since then, the probability that the Fed would reduce its MBS and Treasury buys rose until it peaked in the last week.

Since we're now less than two weeks away from when the dividend futures contract for the third quarter of 2013 expires, there is little reason for investors to continue dwelling upon when the Fed will actually taper its QE program, especially when it's clear that a consensus has been made. With the time left in the quarter running out, there is too little advantage at this point for investors to even bother with the Fed's short-term plans for QE, unless they're drastically different from what they've indicated would be the case.

Instead, we think that it is more likely that investors will once again shift their forward-looking focus back to the expectations associated with the first quarter of 2014 in deciding what to do with their investment portfolios. If that's the case, based just on the fundamental driver for stock prices, it's a time to buy while stock prices are lower than they will be.

That doesn't consider the effect of new sources of noise that might negatively affect the outlook for investors. With a potential attack on Syria, a potential U.S. government shutdown in October and the potential for the Fed's officials saying or doing something really stupid, just to name a few possibilities being tossed around the news today, there's plenty of noise out there to make investing in the stock market the risky short term affair that it always is.

The key thing to understand about noise however is that it always ends - it is only ever a question of when. And with the immediate future for the Fed's QE program, we're very near the end of its current act.