Political Calculations
Unexpectedly Intriguing!
September 6, 2013
The Past of Beer in Aluminum

We've previously explored the future of beer in aluminum, in which we considered how today's industrial designers are reshaping the aluminum beverage can to improve the beer drinking experience, but today, we're going to revisit the past to rediscover what the industrial designers of yore did to improve the beer drinking experience by bringing aluminum into the design of beverage cans in the first place!

And yet, there was such a time. Before the early 1960s, most canned beer in the United States was contained within the same kind of tin-plated steel can that today is more familiarly found in the canned vegetable aisle at the grocery store.

And that was a problem for many beer drinkers, who had to rely upon using church key can openers to punch holes into the flat tops of their steel beer cans so they could consume the contents, because it required some physical strength to break through.

So yesterday's industrial designers went to work to improve the beer drinking experience of these consumers by replacing the old steel lid on top of the old-fashioned beer can with a new and improved aluminum lid design that was a lot easier to punch through with a church key opener. Here's an old Schlitz beer ad from the early 1960s trumpeting the new innovation (HT: Freakonomics): 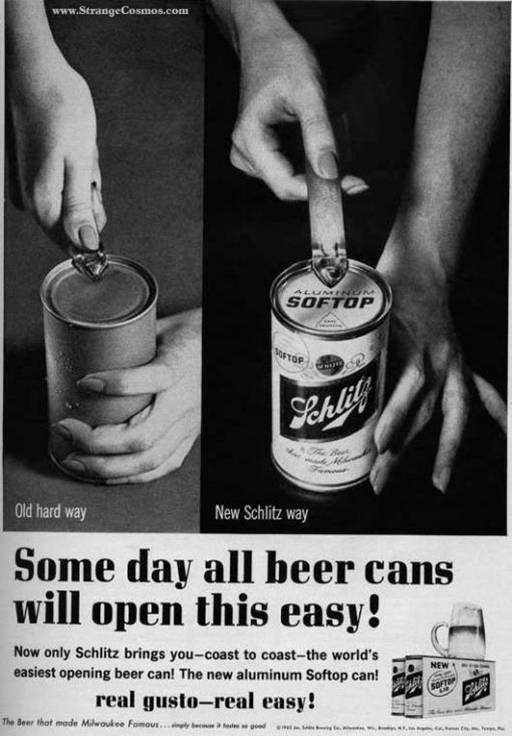 RustyCans describes the history of the introduction of aluminum into the design of beer cans:

In 1960 Cincinnati's Burger Brewing Company tried an experiment to alleviate the complaints of people who found it difficult to punch a hole in the lid of the flat top cans with a churchkey. Flat tops cans had been the first beer cans used, starting in 1935, and you used a churchkey to open a triangular shaped hole in the steel/tin lid to pour out the beer.

As time went on cans had begun using thinner metal, including on the lids, but it still took a little bit of strength to use a churchkey. Cone top cans, which had a crown on the top like a bottle, had also come into use in 1935, but by 1960 only one or two brewers were still using them. Burger Beer, along with Cincinnati’s Heekin Can Company and Kaiser Aluminum decided to make the flat top can a bit more user friendly. Burger began using a aluminum lid which was much easier to punch into with a churchkey than the normal lids.

The new lid, named the "E-Z Open," was introduced in the Summer of 1960. (see August 2008 COM for details). The lids did prove popular. Many other breweries used them. Lone Star in Texas adopted them early. Schlitz Brewing was the first national brewery to adopt the new lids. They used other names besides “E-Z Open” including “Softop.” The lids also provided a space to include brewery logos, brand names, tax stamps, etc.

While the new lids were a success, they were short-lived. In 1962 Iron City began testing a pull top can that didn’t need a church key to open at all, the zip top (or pull tab). Schlitz adopted the pull tab in 1963 and by 1965 over three-quarters of all breweries were using them, including Burger. However, for a short time the E-Z Open lid was a popular feature on many cans as brewers fought for some sort of marketing advantage.

And thus, the modern age of beer drinking in America came to be!