We're going to start solving the mystery of why economic growth in the U.S. was so unexpectedly strong in the third quarter of 2013 in a place you wouldn't necessarily expect: the ports of China.

According to the U.S. Census Bureau, the United States' exports to China surged in October 2013, which we can see in the dramatic spike upward in the year-over-year rate of growth of U.S. exports to that nation for the month: 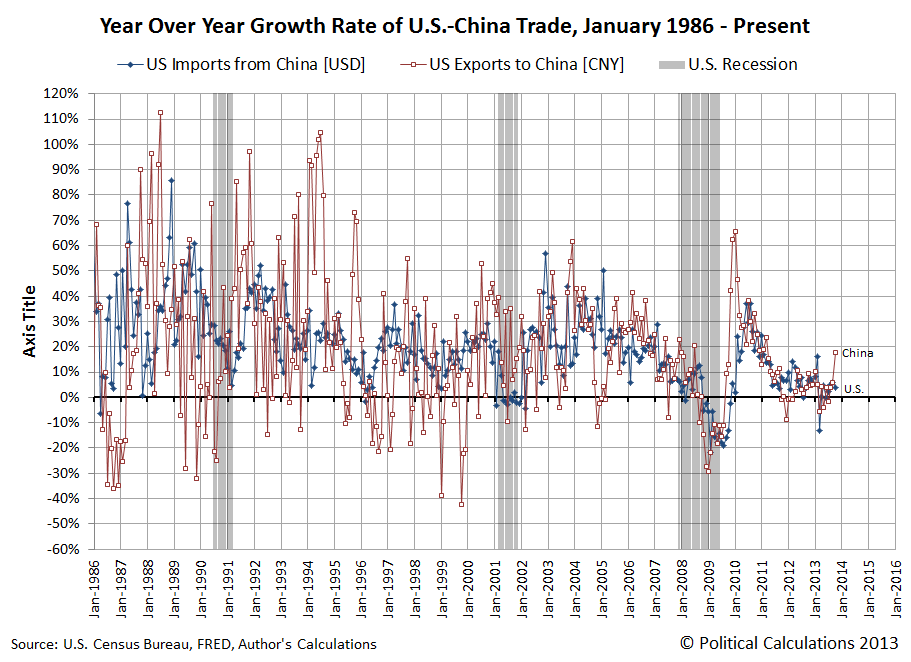 But that's putting it mildly. Left unstated is that the U.S. set at all-time record for the value of its exports to China: 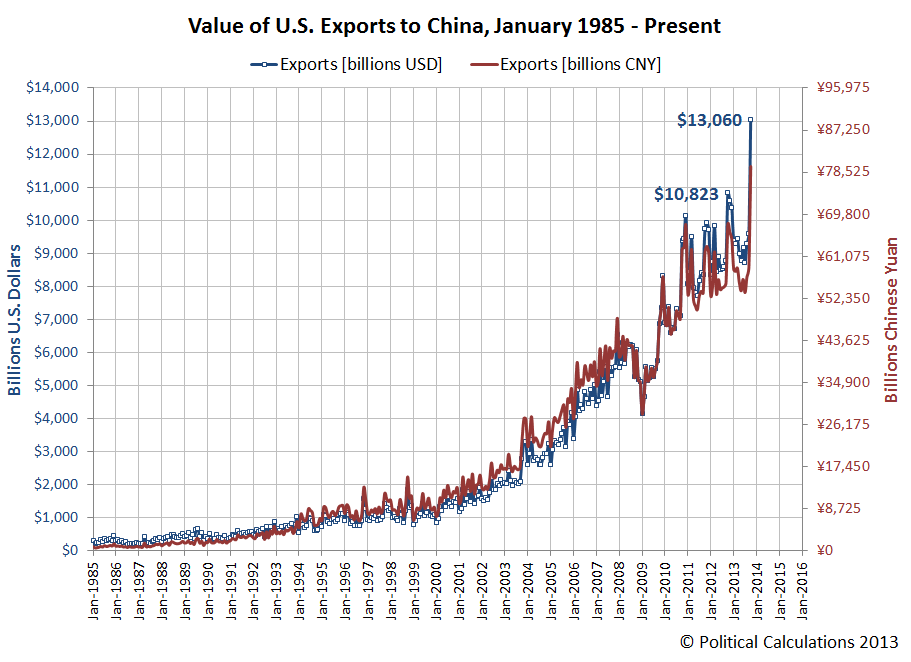 Even Reuters took notice, but didn't really appreciate the magnitude of the month's trade, as the news agency reported from the Chinese perspective:

(Reuters) - China's imports surged in October as exports grew at their slowest rate in months, suggesting efforts to tilt the economy toward domestic demand may be offsetting the external weakness that has dragged on economic growth this year.

Customs figures showed import growth of 28.7 percent year on year in October, well ahead of the 23.0 percent forecast and far in excess of September's 20.9 percent growth rate.

Headline growth in exports meanwhile was its most sluggish in eight months, but strip out the traditionally volatile month of February and October's growth of 15.9 percent was the slowest since November 2009 when they shrank.

"We were expecting quite a deceleration as external demand continues to decline in Western economies," said Donna Kwok, an economist at HSBC in Hong Kong. "But the key thing to look at here is the strength of the domestic demand factors as imports grew nearly 29 percent."

Reuters goes on to look at where all the increase in the goods that China imported from other nations originated:

Imports from all three of China's key trading partners surged.

The rate of import growth from the United States accelerated the fastest at 20.5 percent over a year earlier, jumping by 7.6 percentage points from September's pace.

We drilled down into the Census' data on what the U.S. exported to China. And what we found is that the U.S. exported a record amount of soybeans to China in October 2013, the value of which accounted for 22.6%, or nearly $1 out of every $4 of the value of all $13.060 billion worth of the U.S.' exports to that nation, accounting for nearly all of the year-over-year increase.

So where did all these soybeans come from? Because they definitely weren't there last year....

It turns out that weather conditions in 2013 across all of North America were nearly ideal for growing just about every crop grown in the U.S., with the result that U.S. farmers were harvesting bumper crops of just about everything they grow in August and September 2013.

Those bumper crops, in turn, solves a different mystery: why did the U.S.' GDP unexpectedly grow so much on increased business inventories in the third quarter of 2013? 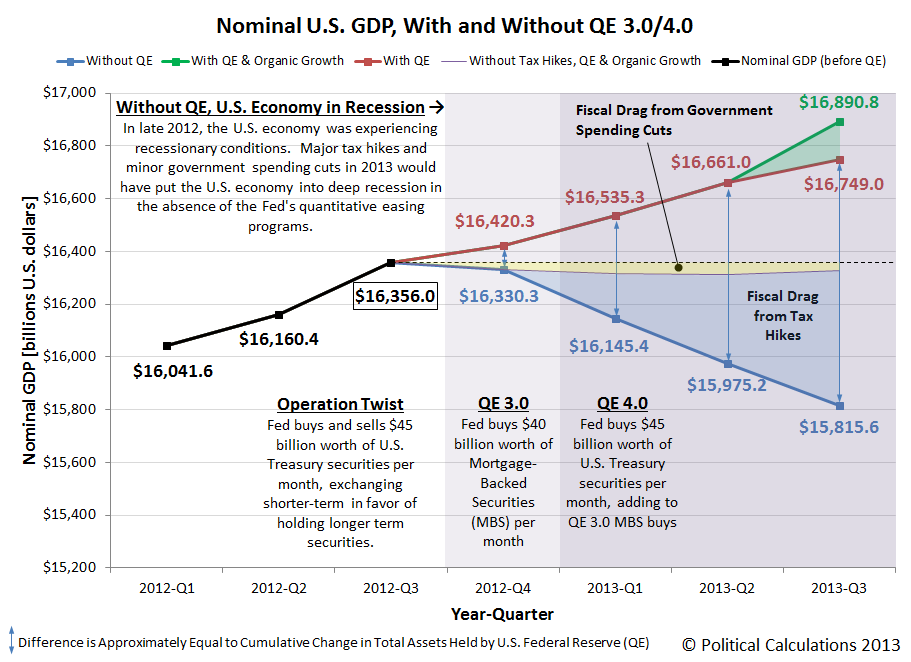 Reuters reports on that story:

(Reuters) - The U.S. economy grew faster than initially estimated in the third quarter but weak demand and a pile-up in business inventories buoyed the case for the Federal Reserve to keep up its bond-buying stimulus for now.

Gross domestic product grew at a 3.6 percent annual rate instead of the 2.8 percent pace reported a month ago, the Commerce Department said on Thursday.

It was the biggest gain since the first quarter of 2012, but inventories accounted for almost half of the increase in growth. 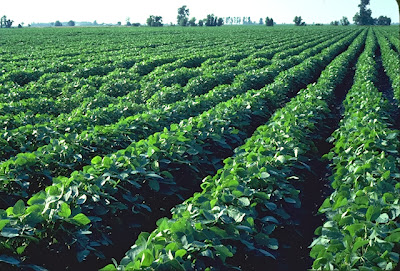 Thanks to the international trade data, we now know what U.S. businesses were putting into their inventories in such great quantities! It would appear that the bumper crops produced by U.S. farmers were parked in silos and storage containers (or rather, inventories) in the third quarter of 2013. Those inventories subsequently enabled a very large surge in exports to China in October 2013, which is in the fourth quarter.

Now, what that means is that the U.S. economy isn't necessarily as strong as it would seem from its GDP data, since the vast majority of the organic growth in the economy, above and beyond the level the Fed has been able to generate through its quantitative easing programs, would appear to have occurred just in the agricultural industry. Which we note would also appear to be the result of unique factors that applied in 2013 that are well outside the control of that industry.

That in turn would explain why the stock markets are reacting so negatively to the increasing expectation that the Fed will begin to taper its QE programs in the first quarter of 2014 - they know there isn't enough sustainable organic growth in the U.S. economy to offset the loss of the Fed's stimulative QE programs.

And we've already demonstrated that increasing likelihood of a Fed QE taper is behind the recent resurgence of recessionary conditions in the U.S. economy, with the greatest impact being felt by the U.S. housing industry.

We should also note that the spending increases in the new budget deal in Congress would not meaningfully add to GDP in 2014, since it doesn't address the source of over 90% of the fiscal drag holding down the U.S. economy: President Obama's 2013 tax hikes.

Nor does it address the imposition of higher income taxes on low and middle-income earners, which will take effect in 2014 thanks to the multiple failures and mandates of the Affordable Care Act (popularly known as "Obamacare"), and which have put obtaining affordable health insurance coverage beyond their means unless President Obama agrees to address them.

On the whole, unless something dramatically changes in the very near future, 2014 won't be anywhere near as promising as what a lot of economists are currently suggesting. But then, all of the rest of them haven't figured out the soybean thing yet....