Back in 1823, Clement C. Moore published the classic Christmas poem 'Twas the Night Before Christmas, which convinced the world, once and for all time, that Saint Nicholas (perhaps now better known as "Santa Claus") traveled the world in a miniature sleigh pulled by eight tiny reindeer.

Did you ever wonder what that sleigh looked like?

To find out what a sleigh in Clement Moore's time might have looked like, we turned to the U.S. Patent Office. Since many inventions, like sleighs, really represent the results of the cumulative incremental improvements of things that already exist, by going to the earliest sleigh-related patents, we should be able to get a good sense of what they looked like in that early era.

The oldest patent for a sleigh in the United States that we could find is represented in U.S. Patent 1,334, which was issued to Daniel Carpenter of Nelson, New York on 20 September 1839. 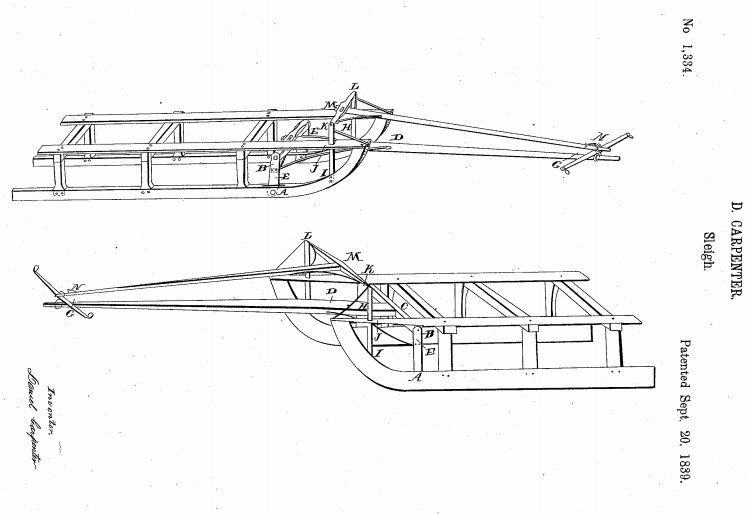 As you can see, it's really more of a sled, but it really gives a good idea of what the suspension for a sleigh was like in the early-1800s: super-rigid. Santa would definitely have been in for a rough experience on his ride!

The next oldest patent we found also gives some insight into the sleigh-riding experience. Here's U.S. Patent 4,667, which looks a lot more like the sleigh we would expect Santa to drive! 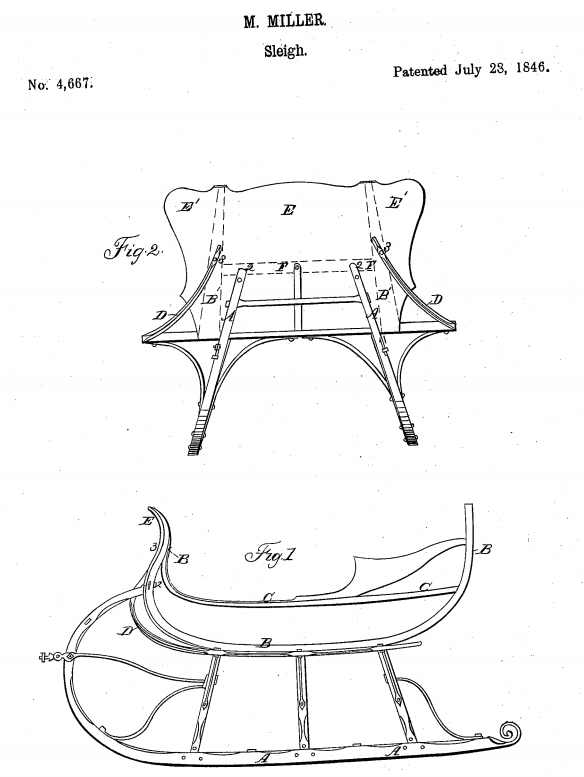 The invention incorporated into this sleigh design by Moses Miller of Fort Ann, New York, is the screen for keeping snow out of the sleigh's coach. What that tells us is some twenty years earlier, the typical sleigh riding experience frequently involved having snow kicked up into the cab, which means that in addition to a very bumpy ride, Santa was likely also cold, damp and miserable.

Which perhaps explains his girth. Moore describes St. Nicholas as "chubby and plump", which of course would provide him with the necessary insulation to cope with the cold.

Our next sleigh patent takes us 11 years further into the future, as David S. Barber, Almon Thompson and De Algeroy Thompson were awarded U.S. Patent 12,850 for their improvement in sleighs on 15 May 1855. Their innovation? Retractable wheels! 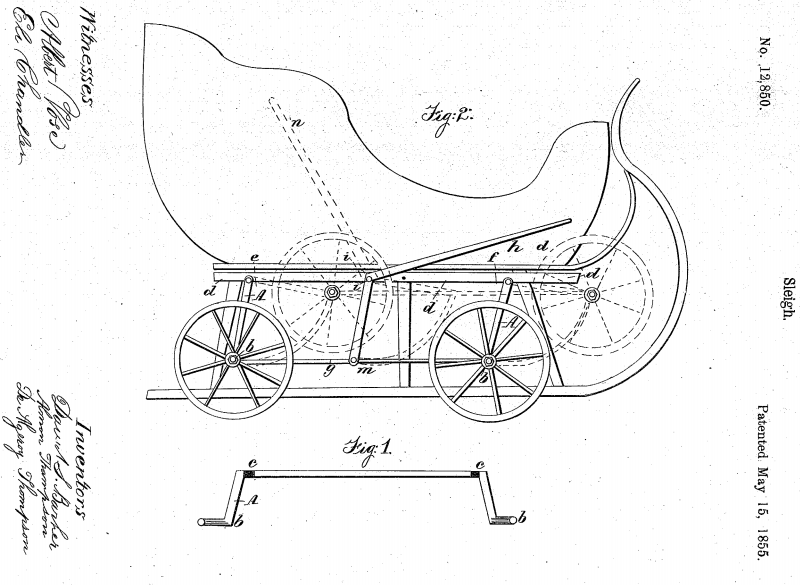 Now, think about this. The rails of a sleigh are meant for traveling over snow, but what good are they when they run out of snow and ice to run upon? Santa's rough ride would get a lot rougher, unless he could quickly convert his sleigh into a wagon!

The next sleigh invention we'll feature starts going off in a very different direction. Charles H. Hudson's U.S. Patent 116,191 is the earliest self-propelled sleigh we came across in our search of the U.S. Patent Office's records, which would eliminate those eight tiny reindeer that worked as Santa's propulsion system. 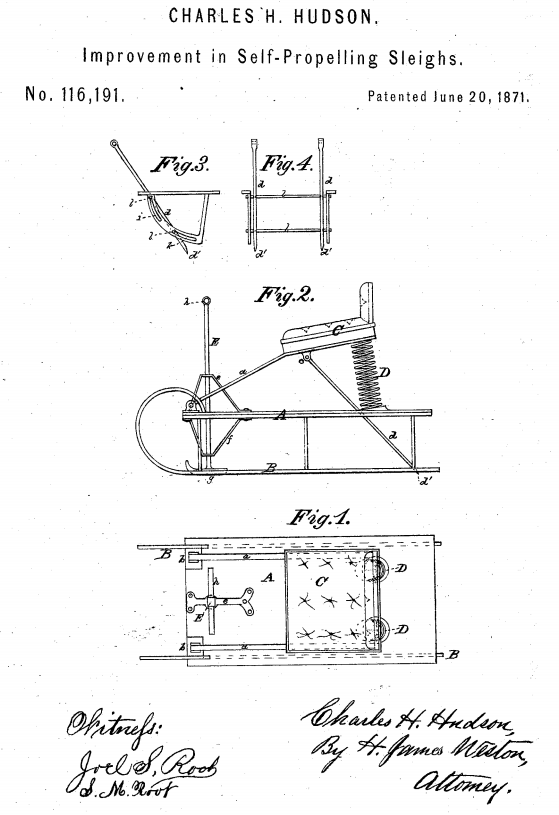 But that's not the main innovation! Here, for the first time, we see that a large spring has been incorporated under the seat of the sleigh, which would make this one of the first sleighs we can see to have some kind of shock absorption capability!

Not that it was used for that - it was really part of the self-propulsion system for this sleigh design, where the driver would throw their weight onto the seat, which would then compress before springing back, the momentum of which was converted into forward motion. Although left unstated in the patent, that method of locomotion would also address the issue of Santa's chubbiness, because going anywhere on this sleigh would be a real workout!

The next sleigh patent we'll consider was invented by John Zbornik of Old Mission, Iowa, who thought to incorporate leaf springs between the runners and the coach of the sleigh to work as true shock absorbers in U.S. Patent 245,597. 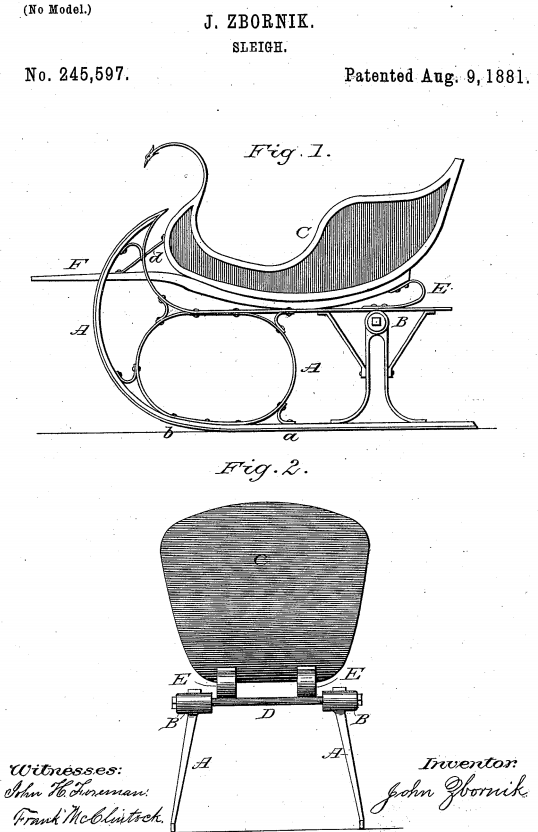 It would be another 12 years before sleigh designs really advanced, thanks to Willie N. Snow of Snowville, New Hampshire, who would invent a more robust and simpler suspension system for sleighs in U.S. Patent 495,845 on 18 April 1893. 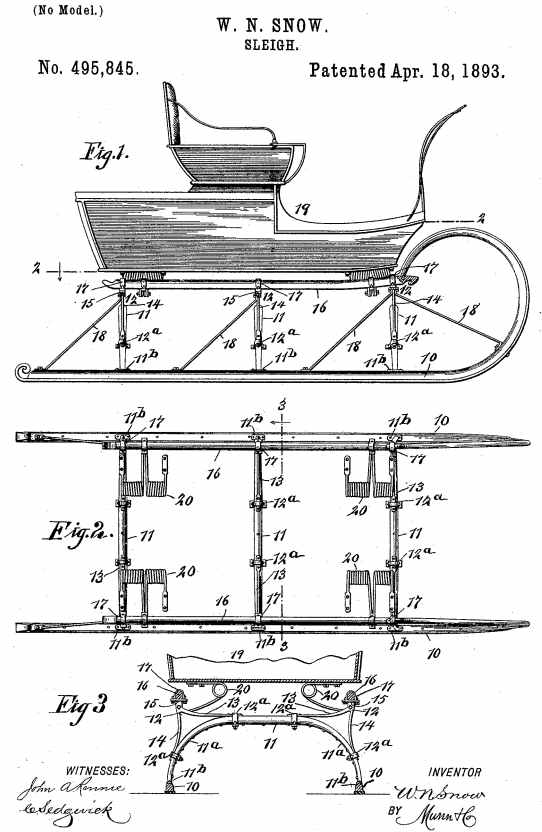 As you can imagine, it wouldn't be long after this point in time that the new U.S. automotive industry would begin to influence sleigh inventions.

But not before steam power was first tried. That innovation was the focus of U.S. Patent 756,078, which was issued to Joseph Raymond Tibbets of Delmar, New York on 29 March 1904. 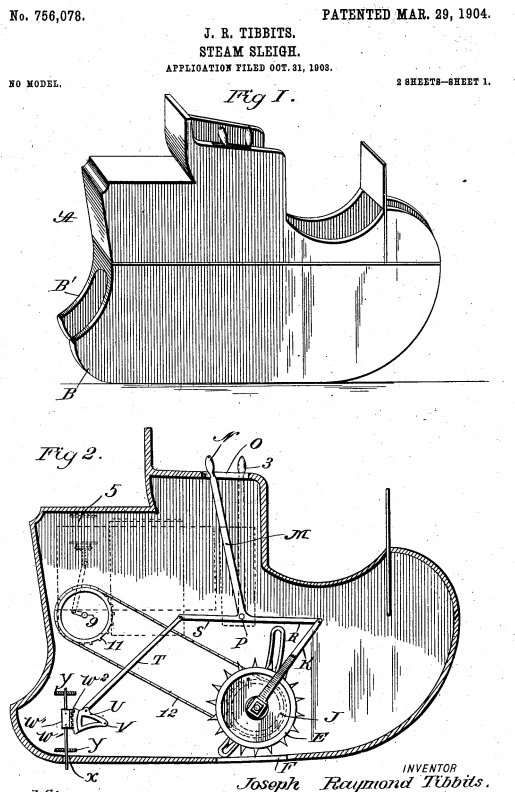 Looks a bit like a World War I tank. But then, that's pretty close to what it was, considering the era in which it was invented!

Still, with reindeer, human and steam power being what they are, American inventors finally turned to the internal combustion engine from automobiles to propel their sleigh inventions. But, since we're now into the brand new age of airplanes, why not throw in some propellers too, as Samuel Weinberg did in U.S. Patent 1,213,715. 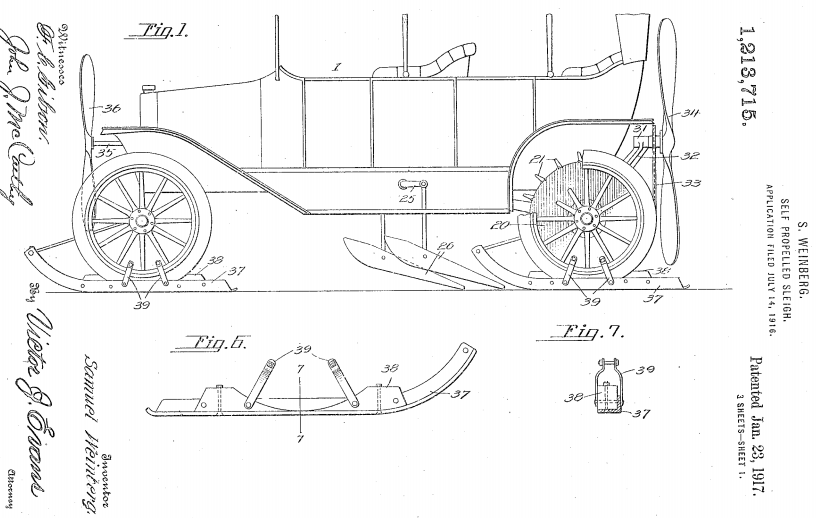 Now, we're even getting close to a flying sleigh! But you'll notice that sleigh riders are still exposed to the cold. Eugene E. Lesher addressed that shortcoming in U.S. Patent 1,470,087 for his motor-sleigh invention, which was issued on 9 October 1923. 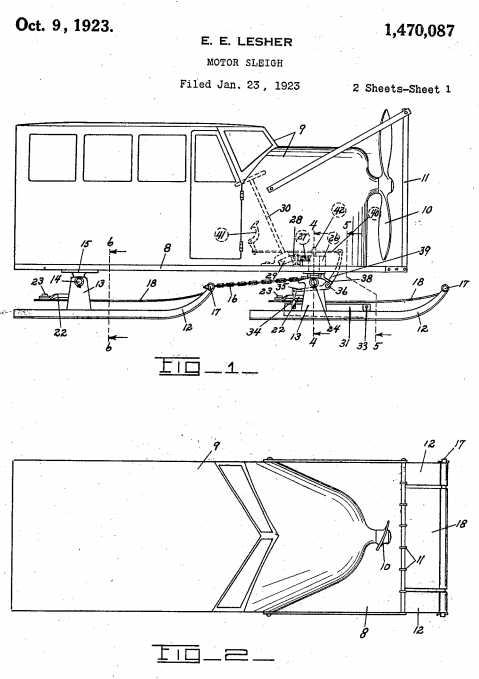 Do you feel it? We're almost ready to fly!

U.S. Patent 1,946,018, issued to Ole Frederickson of Great Falls, Montana on 6 February 1934, covers the aerial sleigh, which was designed to fly at very low altitudes above snow and ice. And no magical corn-fed reindeer were required! 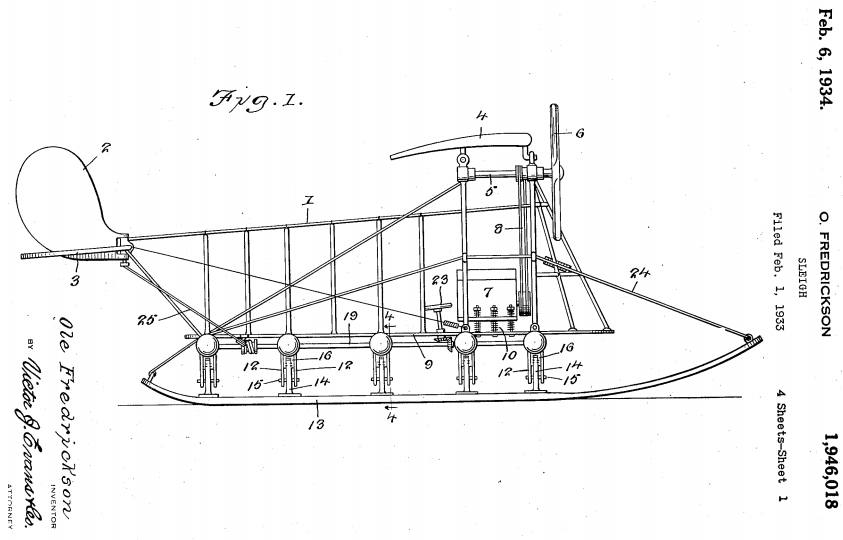 And that really covers the history of the sleigh in U.S. Patents. From a functional standpoint, the snowmobile has replaced the sleigh (very early versions of what we would recognize modern snowmobiles are shown in U.S. Patent 1,254,456 and U.S. Patent 1,318,166), and as a result, sleighs as a means of transportation have fallen by the wayside of history.

But then, why would a little something like that ever stop St. Nick? This is a man, after all, who was flying sleighs over 110 years before the aerial sleigh was even invented!