The S&P 500 continued to behave as expected last week, especially after the selling/buying opportunity of Monday, 13 January 2014 that we did our best to communicate to our informed readers well before the fact.

Following that short-term opportunity, there was a surge in expected future dividends that coincided with, you guessed it, an increase in stock prices: 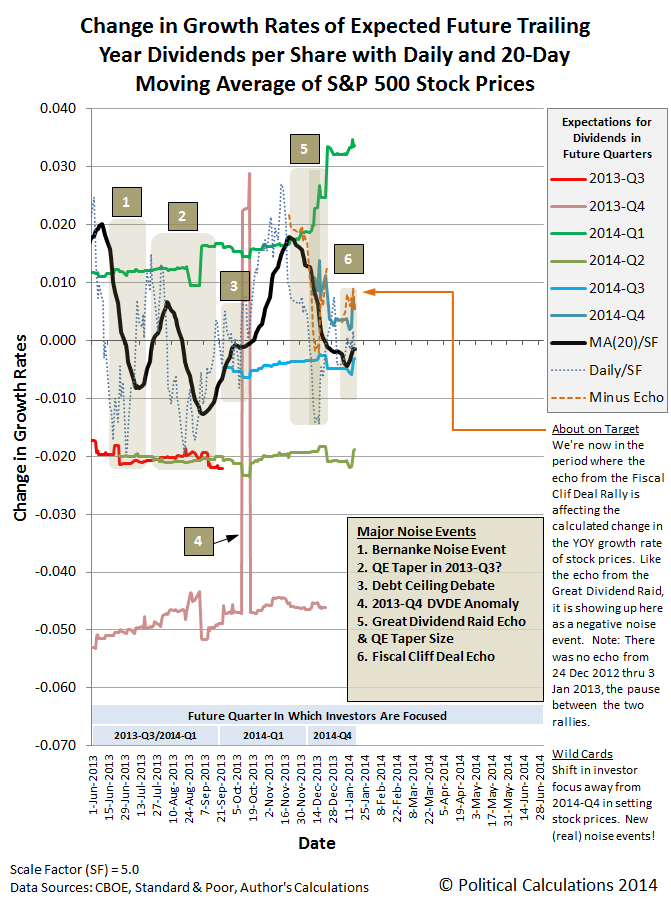 So, all in all, stock prices behaved pretty much exactly as we would rationally expect they would last week.

And especially after accounting for the echo effect from the Fiscal Cliff Deal Rally of 2013, which we now have just enough data for the anniversary period coinciding with the rally to quantify.

What is the echo effect? It's something that affects the math we use to anticipate where stock prices should be based upon the primary fundamental driving factor of their underlying dividends per share, and specifically our calculation of the growth rate of stock prices.

Here, when there is an anomalous event in the historical data, such as a sustained rally as occurred late in 2012 (the Great Dividend Raid Rally, which ran from 15 November 2012 through 21 December 2012) and in 2013 (the Fiscal Cliff Deal Rally, which ran from 3 January 2013 up to 21 April 2013), the effect upon our math is such that it makes our calculation of the change in the year-over-year growth rate of stock prices appear as if they are depressed (in the case of the anniversary of a rally) or bubblicious (in the case of the anniversary of a negative noise event or crash).

You can actually see the echo of these events in our chart above - the dotted blue line indicating the change in the growth rate of daily stock prices has not been adjusted to account for the echo effect, while the dashed orange line has.

What we find after filtering for the echo effect is that changes in the growth rate of stock prices are closely following the preceding changes in the growth rate of dividends per share associated with the expectations for the future quarter of 2014-Q4. Which is exactly what we should expect to be happening, up until investors either shift their focus to another discrete point of time in the future or until the onset of a new current day noise event.

Which means, of course, that stock prices today, as indicated by the value of the S&P 500, are right about on target.