Finally, the market did something interesting last week!

If you couldn't tell from the tone of our last several posts observing the S&P 500, we've been pretty bored with the market over the last several weeks, seeing as the market was pretty much behaving as expected all through that time.

But then, beginning on Thursday, 23 January 2014, we saw the arrival of a new negative noise event, where the volume really cranked up on Friday, 24 January 2014, with the S&P 500 losing over 2% for the day, which for the record, is how much stock prices have to change in a single day before we become greatly interested in what the stock market is doing. Our chart tracking the change in the growth rate of stock prices against the backdrop of the expectations that investors have for the change in the growth rate of trailing year dividends per share captures the carnage. 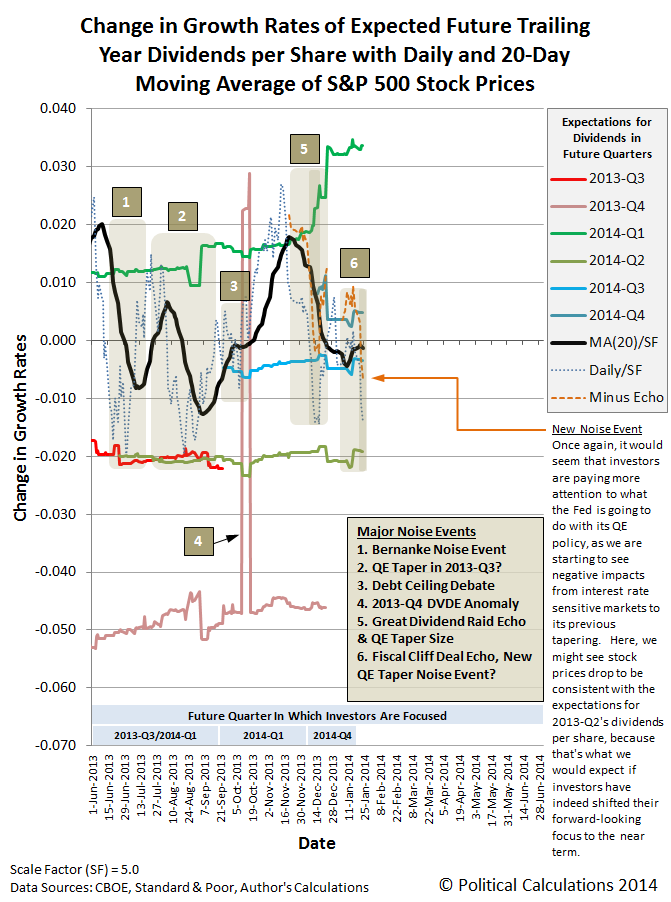 While much of the focus in the news highlighted lackluster 2013-Q4 earnings reports and on increasing economic concerns in developing markets, the real story once again is uncertainty related to the Fed's QE policies. The weakness in emerging markets reflect this, because of their sensitivity to those policies. The editors of Bloomberg explain how the Fed's tapering of its purchases of U.S. Treasuries and Mortgage-Backed Securities are negatively impacting these very interest-rate sensitive markets:

The problem is that two things are amplifying the adjustment of capital flows: first, the dependence of global capital markets on the dollar, and hence on the policies of the U.S. Federal Reserve; and second, policy mistakes in some of the most-watched developing economies. In the short term, there’s little to be done about the dollar’s destabilizing pre-eminence. But economic reform in some of the main emerging-market economies, desirable in its own right, would help calm nerves.

Paradoxically, the U.S. market crash of 2007 and 2008 entrenched the dollar’s global dominance. Investors sought safety, and U.S. government debt remains the world’s safest asset. Despite tremendous federal borrowing, U.S. debt was soon in short supply. The Fed’s quantitative easing took trillions out of the market, and emerging-market governments bought dollars as a cushion against bad news and to hold their currencies (and export prices) down.

As a result, the emerging markets are unduly sensitive to fluctuations -- real or imagined -- in U.S. monetary policy. The Fed has recently begun to pivot away from quantitative easing, signaling that the era of extraordinarily loose U.S. monetary policy will come to an end. This is making investors think twice about putting their money in developing countries.

We've previously observed that a similar phenomenon is occurring within the U.S. economy, were the most interest-rate sensitive Real Estate Investment Trusts (REITS) have likewise been negatively impacted by the Fed's tapering decisions.

The main issue with the Fed's QE policy now is not whether it is going to taper its economy-stimulating bond buying, but at what pace? Or rather, how much and how often?

As we saw in the previous QE taper-related noise events, investors shifted their forward-looking focus to the nearer-term as the probability of the Fed's tapering rose and fell, causing stock prices to fall and rise with their assessment of that risk for when and how the Fed will execute its tapering strategy, which won't likely be known until the conclusion of their meeting on 28-29 January 2014.

So the noise event will likely last for at least several days, with statements by Fed officials about their QE tapering intentions and willingness to ensure liquidity in the markets having a notable effect on stock prices.

And then it will be over, because all noise events end, and investors will go on to set stock prices according to their expectations. The Fed's challenge, if it desires market stability, will be to set those expectations back to the level they were before the new noise event broke out.

And if they don't desire market stability, then they'll have some serious damage control to do. Welcome to your new job, Janet!