On Monday, 10 March 2014, the word on the street was that China's exports to the world had plunged, which sent U.S. stock prices lower during the day. Here's the basic information as reported by USA Today:


NEW YORK — Hurt by a weak reading on trade in China and tepid growth in Japan, U.S. stocks started the week off lower Monday as the Standard & Poor's 500 index retreated slightly from record-high levels.

CNBC provides some additional perspective on the narrative being floated by the media that Monday:

U.S. stocks fell on Monday, dragging the S&P 500 down from its latest record, as a deceleration in China's exports had investors fretting about the health of the global economy.

Wall Street's decline "is a reflection of what went on over in China; China's exports dropped pretty startling, and the Chinese are again dropping the value of their currency, which has investors worrying about the global recovery," said Chris Gaffney, a senior market strategist at EverBank.

"We're the largest destination for exports from China, so investors have started questioning what retail sales will look like this week. But the weather had to affect shoppers in February, so just like we had a built in cushion for the jobs number on Friday, we're got the weather excuse for retail sales," said Gaffney.

Now, we should note that the source of the data in this case is China's government, and the reliability of that data has long been considered to be highly questionable.

Fortunately, we don't need to rely on data emanating from China to measure the relative health of its economy. We can instead take advantage of the U.S. Census Bureau's more reliable records for trade between the U.S. and China, which was just updated on Friday, 7 March 2014. Our chart below shows the year-over-year growth rates for all of that trade data from January 1986 through January 2014: 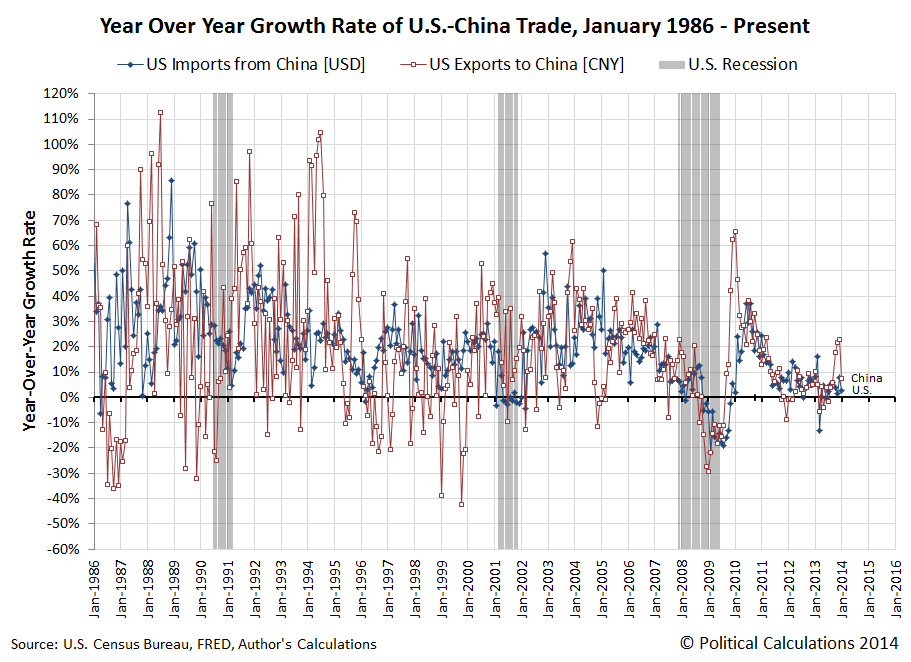 Tracking the growth rates of trade over time is valuable because of what that figure can tell us about the relative health of the national economies engaged in that trade. For example, when a nation's economy is growing more strongly than its domestic economy can support, it will import an increasing amount of goods to meet its needs, and vice versa.

So, if the volume of goods that China exports to the world falls, that would be an indication that the relative economic health of the nations receiving those goods has declined. For the volume of exported Chinese goods to fall so sharply, we would then expect to have noticed a considerable contraction - particularly in the United States which is a major recipient of the goods that China exports.

What the year-over-year data for the growth rate for the value of trade for the goods that China exports to the U.S. tells us is that the U.S. economy is growing slowly, at least through January 2014 - there is nothing to suggest the development of an unanticipated plunge.

And although we're on record as describing the current state of the U.S. economy as being in a microrecession, we do not observe anything like a sudden contraction in the U.S. economy that would be responsible for the reported decline in China's exports.

So could some other factor explain why Chinese exports would drop so sharply from January 2014 to February 2014's reported figures?

It occurred to us that the timing of the Chinese New Year (or Spring Festival) could be playing a role in these values, since the three-week long festival began on 31 January 2014. Affecting just one day in January 2014, the timing of the 23-day long holiday would place most of its impact in the month of February 2014, during which significantly fewer of China's population would be working.

That timing would also explain in part why China's level of imports were so high in the preceding months - Chinese businesses would have been stocking up on the things they need in advance of China's celebration of the lunar new year.

We find then that the suggestion in news reports of a massive slowdown in China's export economy are not well founded. And perhaps that's why the U.S. stock market closed just fractionally lower on 10 March 2014, with the S&P down by just 0.87 points to 1877.17. If the news of China's export decline in February 2014 was really unexpected, the S&P 500 would have fallen by a far greater value.

That the market didn't fall by any meaningful amount tells us that investors can read a calendar. That so many mainstream media journalists somehow missed the impact of China's largest and longest holiday in reporting China's export data tells us that they have yet to master that skill.