We started the month of February 2014 with a basic question: do we need to continue accounting for the echo effect in our methods for anticipating stock prices?

We're closer to an answer for that question, but unfortunately, given the events in the market of the past week, we haven't yet arrived at a definitive yes or no. Our first chart shows the change in the echo-filtered and non-echo filtered year-over-year change in the growth rates of stock prices against our calculated change in the year-over-year growth rates for the S&P 500 dividends per share expected to be paid from one future quarter to the next. 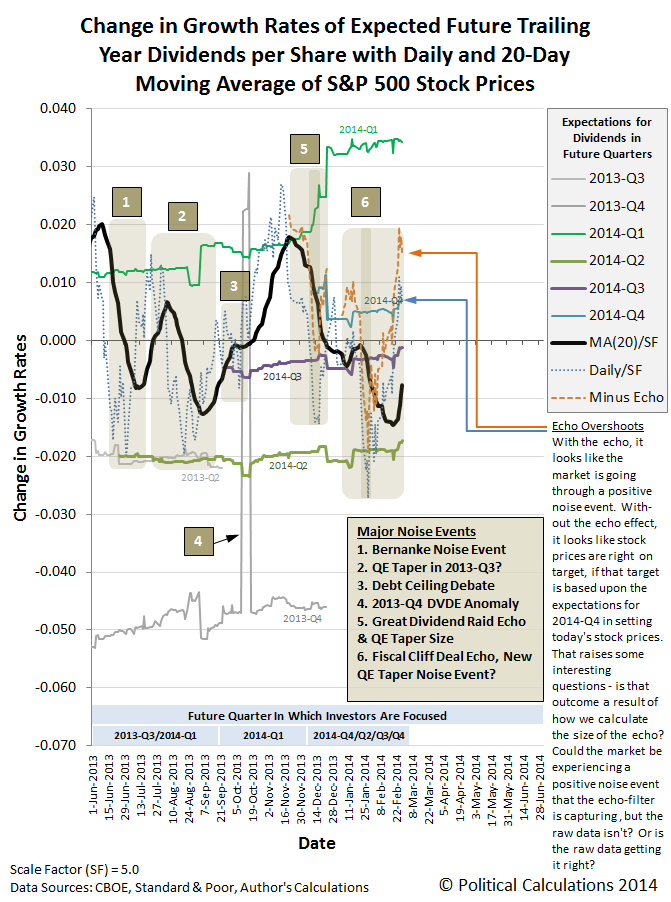 Minding the notes in the margin, which we'll explore separately in an upcoming post, we observe that the echo-"filtered" value suggests that the U.S. stock market is experiencing something of a positive noise event, with stock prices elevated above the level they would be if they were only supported by the underlying fundamental of their dividends per share in 2014-Q4.

If this the better explanation for how stock prices are behaving, then the market is set up for what we'll describe as a "Wile E Coyote" moment, in which they would seem to be defying gravity. We can see that in our updated chart showing the echo-filtered predictions for the alternative futures for stock prices in February 2014: 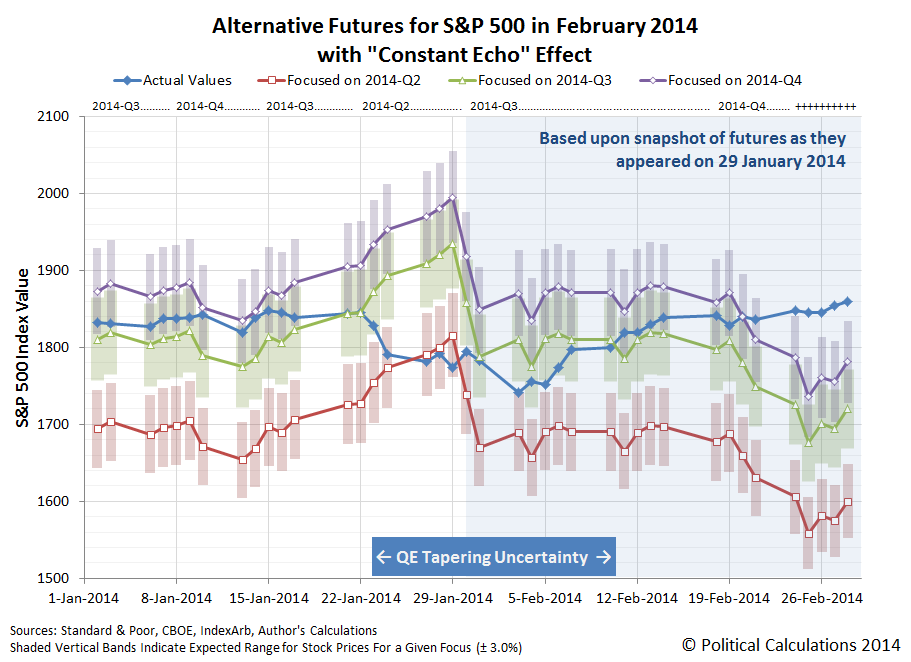 Meanwhile, the non-echo-filtered results suggest that the value of the S&P 500 is fully consistent with what we would expect they would be if the forward-looking focus of investors is strongly focused upon the expectations for dividends per share associated with 2014-Q4. 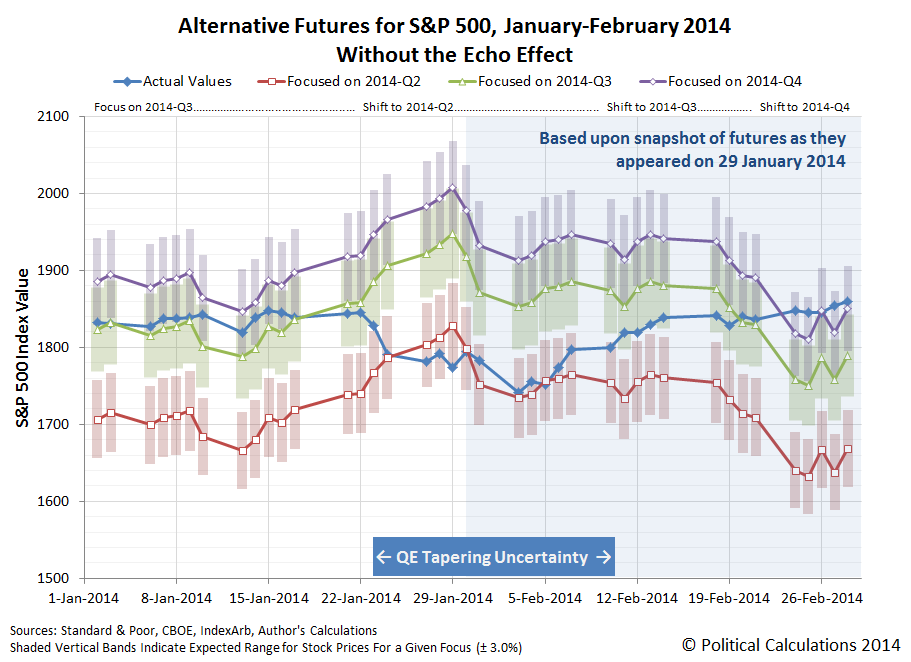 This second chart would seem to be better overall at anticipating how stock prices have changed since the beginning of 2014 as investors have shifted their forward-looking focus from one distant future quarter to another in response to new information in setting today's stock prices. And for the record, we would indeed prefer this to be the case because it would simplify the math involved. But we cannot yet commit to this approach because the echo-filtering would seem to better explain how stock prices responded following certain events, such as the market's reaction to the Fed's announcement that it would continue its current QE tapering policy at its current pace.

There is a third option to consider as well. In our echo-filtering math to date, we've presented the echo effect as if it were effectively a constant value. What if we should be treating it as a predictable source of noise in our math that varies in volume over time?

In our echo-filtering technique, we're basically comparing the change in the year-over-year growth rate of today's stock prices with the change in the growth rate of today's stock prices over a different span of time (say over 18 months), using the difference between them to account for the effect of anomalous events that we know are present in the year-over-year data. The following chart illustrates that with current day stock prices, with those of 12 months earlier and of 18 months earlier: 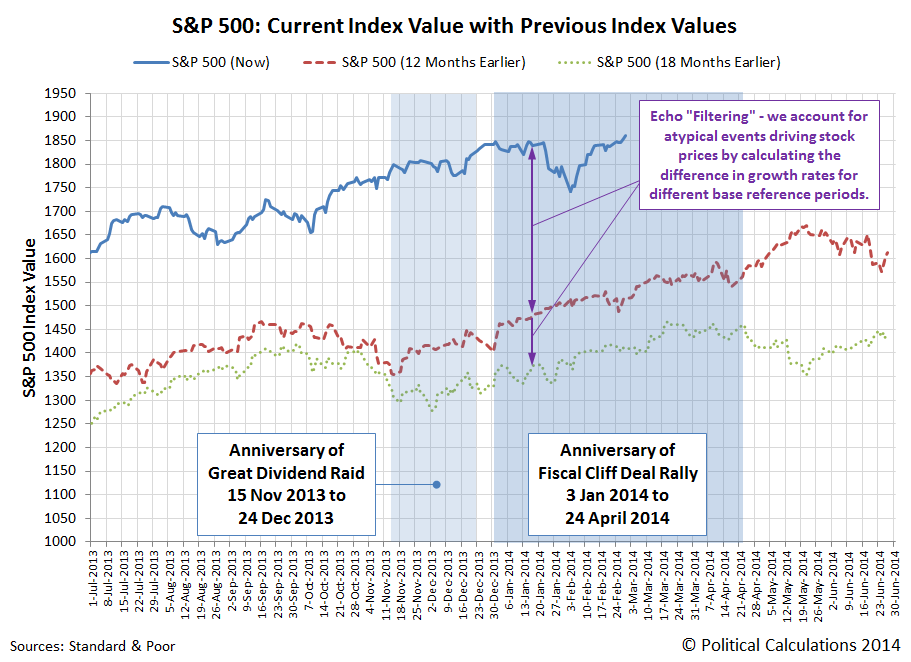 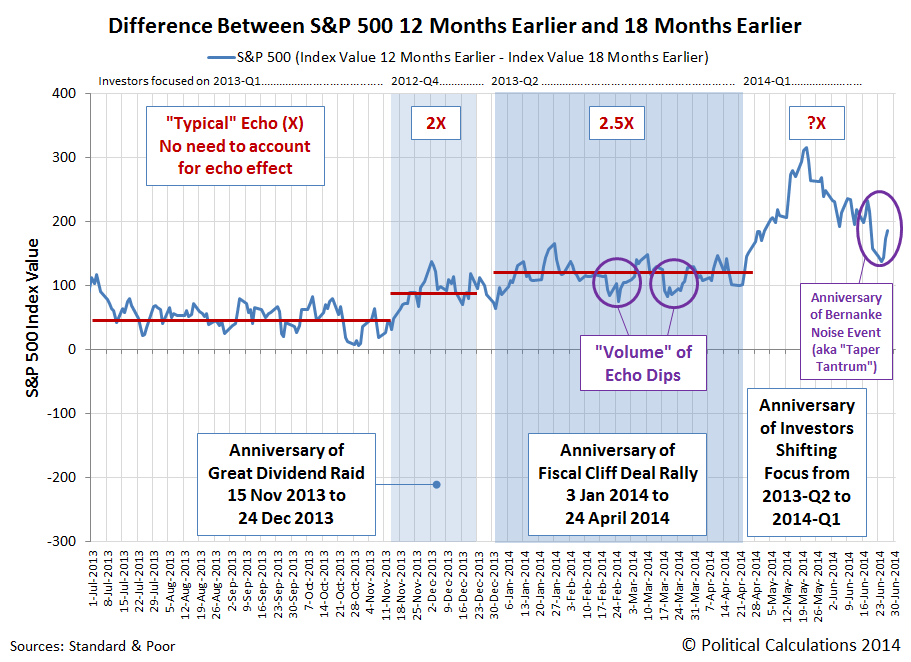 Looking at the chart, we're presently in the period coinciding with the bottom of the first "dip" in the volume of the echo of the Fiscal Cliff Deal Rally (circled in the chart above), which might in part explain why we've seen such an apparent swing in the explanation capability of the echo-vs-non-echo-filtered data in just the past week. That dip in the echo's volume could very well account for a good portion of what seems to be a positive noise event in the echo-filtered data.

Clearly, we have more work to do in understanding how to analytically deal with the echo effect. Our next step will be to develop the math to account for the variable volume of the echo over time and test drive it behind the scenes over the next couple of weeks until we come up with a viable approach.

In the meantime, if the echo effect is indeed something we need to track, we can expect to see it appear to phase in and out of effect as the volume of the historic echo changes during the next month and a half. Basically, the historic data indicates that we have until mid-April to sort out how to deal with it, because if it does turn out to be something we really need to factor into our math on a continuous basis, we'll desperately need it in place to sort out what's really on with stock prices after 22 April 2014.

Or as we like to say, welcome back to the cutting edge!