What happens when the new Chair of the Federal Reserve, Janet Yellen, tells investors exactly how far forward in time they need to look for setting their expectations in making their investment decisions today?

"[T]he language that we used in the statement is considerable period. So I, you know, this is the kind of term it’s hard to define. But, you know, probably means something on the order of around six months, that type of thing.”

She was referring to the sentence in the FOMC statement:

The Committee continues to anticipate, based on its assessment of these factors, that it likely will be appropriate to maintain the current target range for the federal funds rate for a considerable time after the asset purchase program ends, especially if projected inflation continues to run below the Committee's 2 percent longer-run goal, and provided that longer-term inflation expectations remain well anchored.

For better context, here's the WSJ's video of Yellen's comments.

What Yellen is communicating here is that about six months after the Fed terminates the tapering of its current quantitative easing programs, it is likely that the Fed will begin increasing the Federal Funds Rate and, in effect, increasing all interest rates in the U.S.

But that's not the key date here, at least where investors are concerned. The key event that would set that clock ticking is something that the Fed will most likely announce at the end of the Federal Open Market Committee's September 2014 meeting: the exact timing for the end of its current Quantitative Easing (QE) programs, which will then set that new six-month long clock to higher interest rates ticking.

In essence, in making this statement, Yellen is really directing investors to focus their forward-looking attention toward 2014-Q3 ("this fall") and the expectations associated with it, because that will coincide with the Fed's announcements for how and when QE will end.

So how do you think stock prices reacted to that direction, when it became known just after 3:00 PM EDT on 19 March 2014? 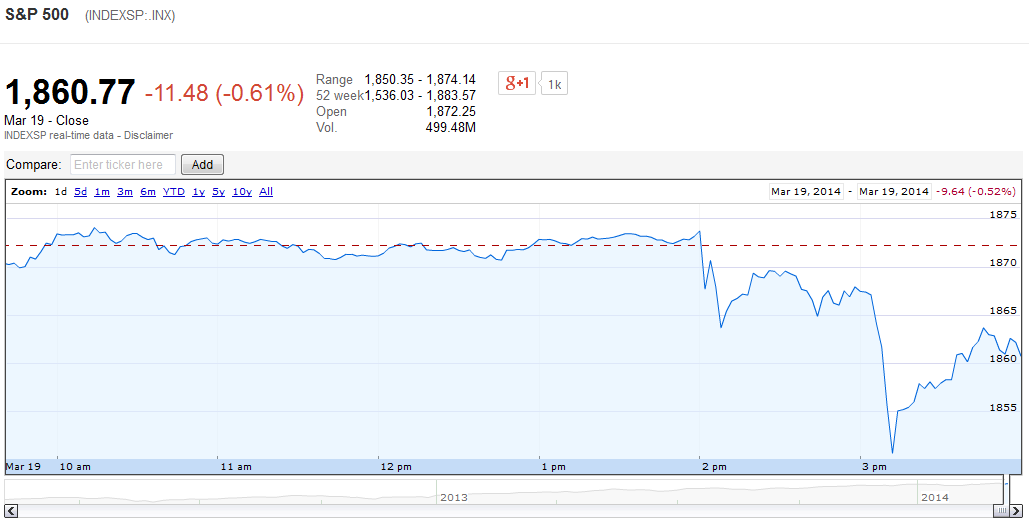 If you said, absolutely predictably, for a forward-looking focus fixed upon the expectations associated with 2014-Q3, then you're right. Updating the chart we featured last Tuesday, 17 March 2014: 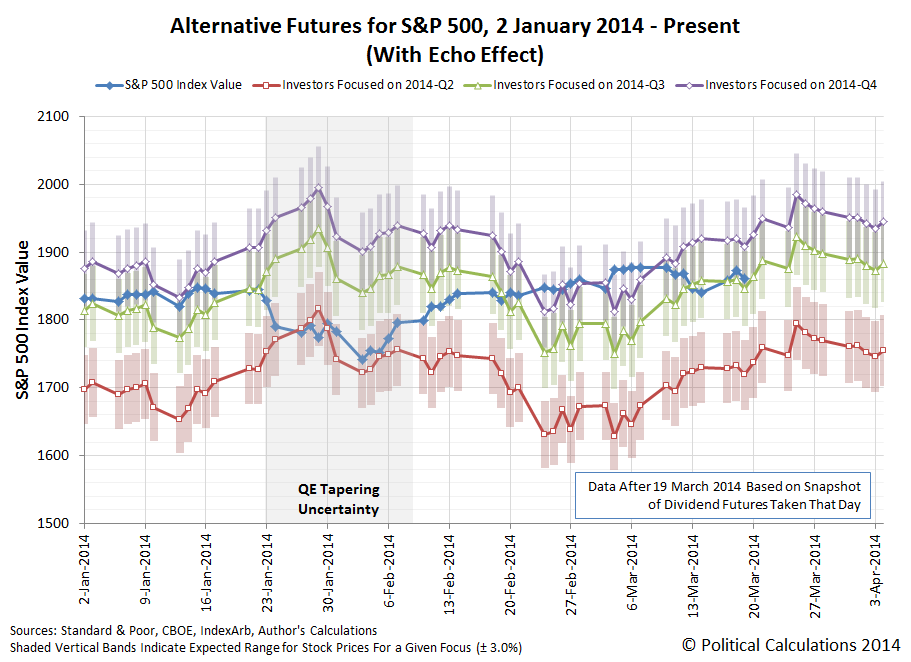 With that focus now set, in the absence of other news that might prompt investors to focus their attention on a different focal point in the future, the main driver of variation in stock prices in the short term will likely be noise events. At least until the FOMC's next meeting, when perhaps, Janet Yellen will apply the lessons she's now learning after her first press conference as Fed Chair in how to provide this kind of forward guidance.

We just hope that the next time, she points to a future with a more promising outlook for the expectations associated with it.